The “108 Youths Speaking for Justice” campaign started from the idea that Youth Scholars first need to realize and recognize the situation of Youths in prison in their own country before we can tackle the problem globally. Take a moment and think about what your peers in prison are going through, especially in terms of access to counsel and the risk of investigative torture. Currently our Youth Scholars are doing research on the Juvenile Justice system in their country for the 108 Youths Speaking for Justice.

Youth volunteers Bhavani and Mindy visited those who had been wrongly accused of crimes in Banteay Meanchey and Siem reap, Cambodia for their school’s Project week. While in Cambodia, Bhavani and Mindy taught at an English school that was started by a man who was forced to flee from his own home and family during the Pol Pot regime.

Bhavani and Mindy greatly enjoyed teaching the young Grade 7 and 8 students. They became so close knit that the girls decided to continue mentoring them from Singapore by email. This led to many of the students applying to UWC for scholarships!

Bhavani and Mindy also made video stories on the successes of the IBJ lawyers, who fought for their clients’ rights and helped them to regain their dignity, giving them insight into the unfair treatment of rural Cambodians. These video stories will be uploaded soon. This trip gave Bhavani and Mindy a greater awareness of the Cambodian justice system and an awareness of how privileged they have been to receive an education and to know their own rights. 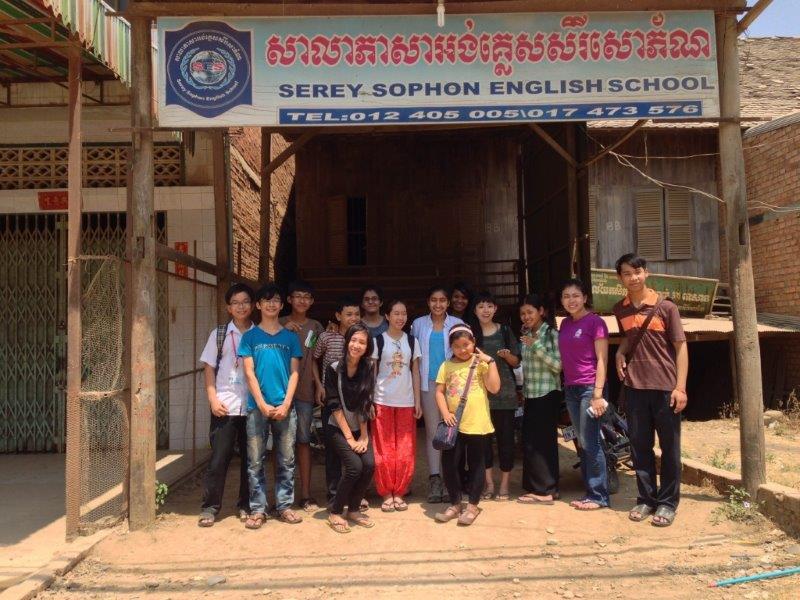 Bhavani and Mindy in Cambodia

On the 26th of June 2014, we asked all the Youth Scholars to mobilize against torture. June 26th is the International Day Against Torture/For Torture Survivors Day. Our Youth Scholars held Peace Vigils with their family, friends and classmates. They also raised awareness all around the world!

In addition to the Interfaith Peace Vigil, we also asked the Youth Scholars to print out the Interfaith poster and to take it with them to a famous or recognizable landmark in their city. Our goal was to get as many pictures of  “cities for justice” as possible so we could get worldwide support for IBJ’s cause.

Youth Scholar Céline Alexander made a speech for the Interfaith Peace Vigil. This speech is to raise awareness about IBJ’s cause:

“We are the fortunate ones. We live in a world built on the backs of our ancestors, savor the fruits of their labor, and drink in the liberties so many died for, yet were impossibly far off only a few decades ago. Throughout the past century we have seen society progress faster than previous generations ever thought possible. Across the world, people have raised their voices against injustice, their collective cries a force strong enough to change entire nations and break barriers once considered impenetrable. “