In addition to its 2009 Burundi training session, on Monday June 29th 2009 IBJ organized two roundtable sessions continue the lively discussions which were taking place. Participants were invited to stay on after the training to talk, in a smaller and more relaxed group, about the question of juvenile criminal justice in Burundi. The area shows many of the difficulties which are symptomatic of Justice in Burundi, and the goal of this meeting was, primarily, to establish a general overview of the situation so as to be able to suggest ways of improving it. The group was made up of around 17 people, all involved in various ways with the Burundi judicial system, and was chaired by Astère Muyango, IBJ Burundi fellow. This small gathering also represented an opportunity to develop professional and social connections between participants, who all the while enjoyed some delicious cocktails and snacks.A recent report from the penitentiary administration stated that as of the 25th June 2009 there were 444 juvenile imprisoned in Burundi. In addition to the lack of freedom, these children are, in many cases, held alongside adult convicted criminals. The financial resources to build separate sections for children do not exist and young people are bearing the brunt by being forced to live in a violent and dangerous atmosphere. As was suggested by one participant, an easy solution might be to simply not send children to jail. Désiré Ntahomereye, senior Judge in the tribunal of Gitega, whom we had the pleasure of meeting again the following week, responded that this was easier said than done. The justice system regularly faces juveniles who have been deeply affected by several years of civil war and who therefore have a similar potential for violence to adults. As a result, they represent a clear threat for society and so it can be hard for judges to agree to release. To do so safely, re-education and rehabilitation services, which are not available in the country, are needed.

Some of the participants who were at the roundtable are active in NGOs dedicated to protecting children’s rights. One of these, Jean-Claude Nzeyimana, noted that the justice system does not properly take into account the background of young criminals. Many of them live on the street in tough conditions and, without anyone to rely on, are confronted with violence on a daily basis. These children should thus be seen primarily as victims rather than being cast as criminals. A real attempt to reduce poverty could therefore drastically improve the situation, as could a collective national effort to improve educational opportunities. Unfortunately there is clear tendency in the Burundi judicial system to favour disciplinary action over education, despite that latter proving to be more efficient in reducing juvenile criminality. Pierre Claver, president of APRODH, shared an example to illustrate this, a shocking story which took place a few weeks before the roundtable. A 12-year old pupil caught cheating during a test was, rather than learning form his mistakes at school, sent to a police cell for a couple of days as punishment. 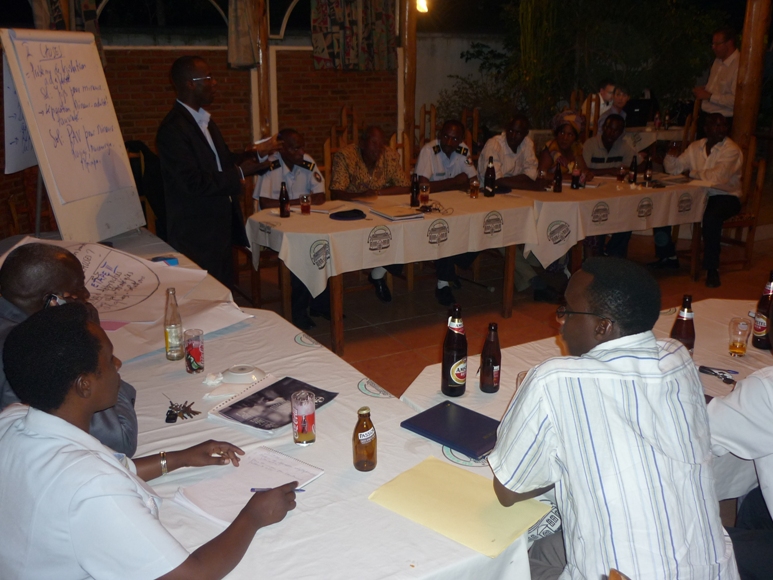 The systematic imprisonment of juveniles also lies in the shortage of alternative sanctions. It is widely felt that the purpose of prison is to punish the culprit, as well as to protect him or from retributive community justice. These factors help to explain why officials of the judicial system do not even think to consult NGOs before sending children to jail. However, a few alternative measures do exist. APRODH, for instance, has provided shelter and rehabilitation programs to young boys who face prison due to violent behavior They only have a limited number of places at their disposal, but other NGOs such as FVS are increasingly moving in the same direction.

The discussion then moved to the need for additional legal tools. Olivier Niyonzigiye, a former Justice Maker now working for RCN Justice and Democracy, oriented the debate by stating that the new penal code provided Burundi with everything needed to improve juvenile criminal Justice. The only thing left, he argued, was to put pressure on the state in order to ensure that it gives the judicial system the means to work properly. This effort would need to be directed towards the entire system, granting priority in access to lawyers to children but also implementing measures which would help all detainees–addressing, for instance, prison overpopulation and pre-trial detentions. In a state confronting numerous challenges, the main problem is convincing political leaders that a functional justice system is a priority for the country in order to fully recover from years of conflict.

This is only a short summary of two very rewarding debates. I would like to end by highlighting two points in the discussion which really struck me. The first was when Jean-Claude Nzeyimana noted that the most effective way of preventing juvenile delinquency was parental control. This idea underlines that Justice is above all a collective good, which does not rely solely on the shoulders of magistrates, police officers or lawyers. Finally, Astère reminded us of one of Karen‘s favorite stories, that of the girl and the starfish. A little girl was trying to return to the sea every stranded starfish she found on the shore. A man approached and told her that her task was hopeless, and that she‘d never be able to save them all. The girl replied: “maybe I won’t, but it will mean something for each one of them I do save”. So don’t lose hope and let’s work to save some little Burundian starfish! 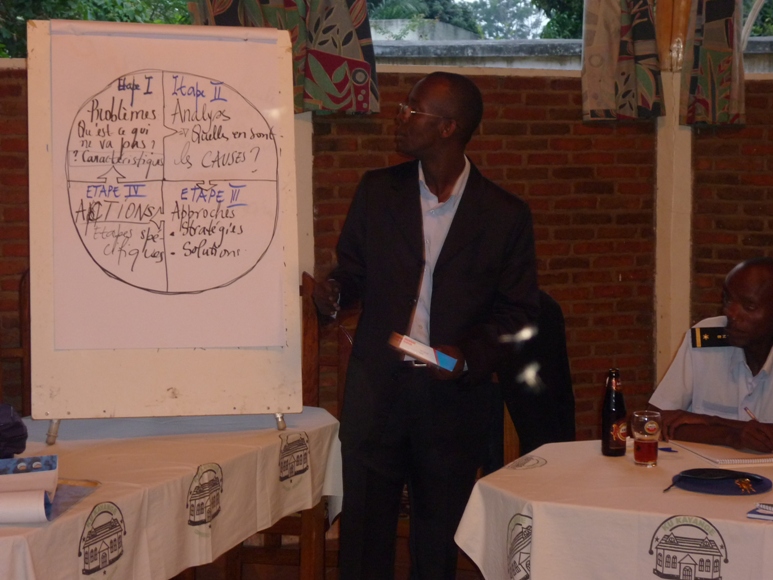 Above: IBJ Burundi Fellow leading the discussing over the “circular chart”, a tool used during roundtable discussions to get participants to make concrete commitments. (Photo by Sanjeewa Liyanage)