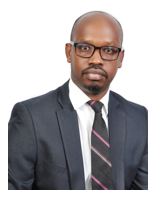 John Bosco Bugingo is a lawyer and IBJ Fellow based in Kigali, Rwanda, where he also fulfills the responsibility of program Director. He is a practicing lawyer with over 14 years of legal practice.

John Bosco was born in Uganda where as a young student looked up to lawyers as symbols of intelligence and wit. When he left Uganda for his country home Rwanda in 1996, he knew it was time for him to pursue a legal career. He completed his Bachelor of Laws, LLB (Hons) at the National University of Rwanda in 2004 and a Master of Laws (LLM) in 2014.

He is a senior member of the Rwanda Bar Association (RBA), the East African Law Society (EALS), and associate member of the Chartered Institute of Arbitrators (CIArb)-London. He has been leading IBJ mission in Rwanda since 2009 and as an advocate Leading the Rwanda Bridges to justice a local chapter of the IBJ, the program has now over one hundred (100) task force defense lawyers, volunteer teams of men and women professionals serving vulnerable categories of detainees and prisoners in Rwanda. John is also a senior consultant of Fountain Advocates, he has developed expertise in human rights and legal defense by providing counsel to vulnerable categories of prisoners, a trainer at the Institute of legal practice and Development

John speaks Kinyarwanda, has excellent command of English and a working knowledge of French and Swahili.

Joelle Kabagambe has been a lawyer since the 6th of April 2010 directly after having finished her studies and obtaining a license in Law from University of Lay Adventists of Kigali (UNILAK). She then worked in the offices of her internship sponsor for some years.

She has been a member of Rwanda Bridges to Justice since 2016. She immediately became a member of the network of women lawyers (RBJ-WLN), and is a member of the Federation des Associations et Union des Jeunes Avocats (FA-UJA). She is also part of East Africa law Society (EALS and she is on the administrative board of the CIB (French International Bar Association). She joined IBJ/RBJ as a permanent Defender Resource Center Lawyer in June 2018. Presently, she is managing both a taskforce of 50 lawyers affiliated with IBJ/RBJ, and the women’s network RBJ-WLN, which currently counts 25 members.

She is passionate about labor and criminal cases. She is moreover a notary since 2018.

Mr. Serwanga Ronald was born, raised and studied from Uganda. He holds a Bachelor of Laws Degree (LLB) from Makerere University (MUK)’s Faculty of Law and a Diploma in Legal Practice (DLP) from the Institute of Legal Practice and Development (ILPD) at Nyanza in Rwanda. He gained experience and inspiration for the legal practice when, as part of his LL.B programme, he worked with SEBALU & LULE, one of the leading law firms and a fellow of DLA Piper Africa Group member firm. He is very familiar with both Ugandan and Rwandan legal systems and his comparative knowledge of both systems becomes an asset to IBJ.

Deborah Twahirwa is a jurist, she was born, raised and studied law in Belgium. Of Rwandan and Burundian descent, she has always been passionate about the defense of human rights and found her vocation during her internship at the local Maison Shalom NGO in Ruyigi, Burundi, who promotes the rights of the children, where she was responsible for the management of files about minors in conflict with the law.

Deborah assists in the coordination, implementation, monitoring and evaluation of RBJ’s programme.

As a former prosecutor for over six years, Johnson knows too well how the lack of access to legal counsel impedes the justice system to meet his ideals of fairness, equity and transparency. In 2006, Johnson joined the Kigali Bar Association. He is also a member of the East Africa Law Society. Along with his sound experience both as a prosecutor and lawyer, Johnson brings with him an extended network of contacts within the judicial system, which will help IBJ Rwanda Fellow build a larger movement in favor of the rights of the prisoners across the country. His strength of determination in producing creative solutions when working in a challenging environment will help him, Herbert and John Bosco realize their vision of a legal aid system that ensures universal access to counsel in Rwanda. Johnson holds a Bachelor of Laws (LLB) (Licence) (Hons) from the National University of Rwanda.