The Ministry of Justice held a three-day seminar in Pursat, this week to educate judicial officials about the new Penal Code. The event takes place as the government completes its codification of the Penal Code, expected to go into full effect December 20.

The seminar covered Part One of the Penal Code, entitled “General Provisions for the Implementation of Criminal Law,” which took effect last November. This seminar was the second of four planned by the Ministry of Justice in conjuction with International Bridges to Justice, an NGO that works to promote legal rights in developing countries.

Police officers, judges, prosecutors and court clerks were among those in attendance. They came to Pursat town, the provincial capital, from each of the province’s six districts to attend the seminar, which ran Monday through Wednesday.

A number of judicial officials requsted a training, according to Nil Philippe, director of education and dissemination for the Ministry of Justice.

Where the old code made only a simple distinction between felonies and misdemeanors, the new one provides a more detailed description of specific crimes, with the added classification of petty offense. It also includes more than 300 new offenses.

Additionally, the Penal Code more extensively details specific criminal defenses, such as self-defense and insanity, and inchoate crimes, which are crimes of intent.

Because of the lack of complexity in the old code, the Cambodian legal system has suffered from a lack of nuance in sentencing and judgement, according to Barbara Bijelic, an IBJ representative. That commonly resulted in maximum sentencing for any category of crime, regardless of circumstantial evidence commonly considered in other justice systems, Bijelic said.

“Someone who stole a couple of apples with a small weapon could be prosecuted the same as someone who committed a violent robbery,” Bijelic said. 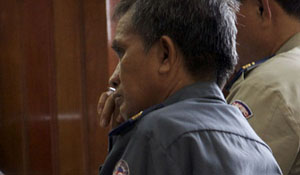 At the Distant Century Hotel in Pursat town, about 70 judicial officials sat in rows of university-style desk chairs and took notes as various Ministry officials discussed the Penal Code. IBJ funds paid for their transportation, lodging and food. Since the training was obligatory, not mandatory, those benefits helped ensure high attendance.

Minsitry officials also took questions. If one person keeps watch outside a house while his two friends break in, someone asked, do his actions carry the same guilt, or is he just an accomplice? If four teenagers agree to deliver a few punches to another group, someone else wanted to know, but one of them accidentally kills the target, are all four equally responsible? 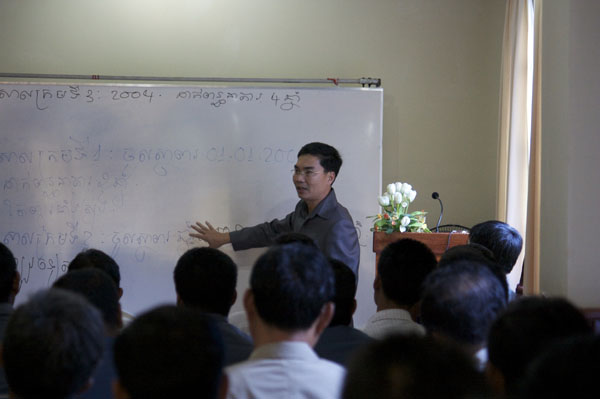 One important aspect regarding the new Penal Code is getting the information out into the public, said Hy Sophea, a Secretary of State at the Ministry of Justice. TA cameraman from TVK, a state-run television network, filmed the first day’s proceedings to air next week.

“We must create awareness about what kind of offenses are illegal,” Hy Sophea said through a translator. “If people haven’t been told that what they do is a crime, we cannot prosecute them.”