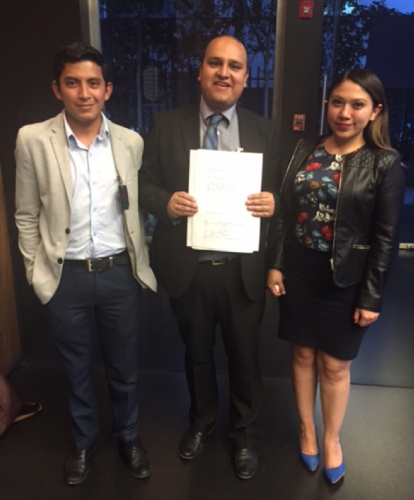 Ernesto Gutiérrez and his colleagues in the creation of IBJ Mexico.

With 50 pro-bono lawyers ready to work and partnerships settled with a national university, IBJ Mexico has officially registered as the new and first branch office of IBJ in Latin America. Ernesto Gutiérrez, a Mexican defence lawyer, is the one in charge of this feat: from scratch and inspired by the delicate human rights situation in Mexico, he took lead of this project and gathered both the human and financial capital needed to start IBJ Mexico. Following IBJ’s work ethic, this project would not have been a reality without the support by the pro-bono commitment of lawyers: they are both the foundation and game-changer for achieving a rule of law globally.

In a recent interview with Mr. Gutiérrez he described this achievement as a team effort to provide access to justice for a great vulnerable majority of the Mexican society. According to him, the breaking point for his resolution was the disappearance of a group of 43 Mexican students in south-western Guerrero state. There was a challenge ahead: how Latin-American societies dreamed of justice, lacking both an adequate defence system and the financial resources to even intend to access to it.

Ernesto Gutiérrez’s career development was driven by the delicate situation that every Mexican citizen faces. After working in the Court of Justice of Hidalgo, he realised the need to reinforce the rule of law in Mexico and the role lawyers played on this. As he described, “if we have trained lawyers that can provide both quality and transparent work, that would be a great step for IBJ Mexico”.

After a great beginning, there is long but promising path ahead for IBJ México. In a five-year plan, IBJ México envisions themselves as the first NGO in Mexico providing access to justice for Mexicans and leaving a footprint within the reform of the justice sector looking for everyone’s benefit.

Referring to this new stage working for IBJ, he said: “Working for IBJ is wonderful, it gives you the feeling of directly working for your people’s future while strengthening your country’s rule of law.”