Medellín, Colombia – On International Workers’ Day on the first of May every year, people the world over gather in the streets to celebrate workers’ rights.  Events on this day are often also attended by left-wing groups and organizations of all colors striving for political and social change. 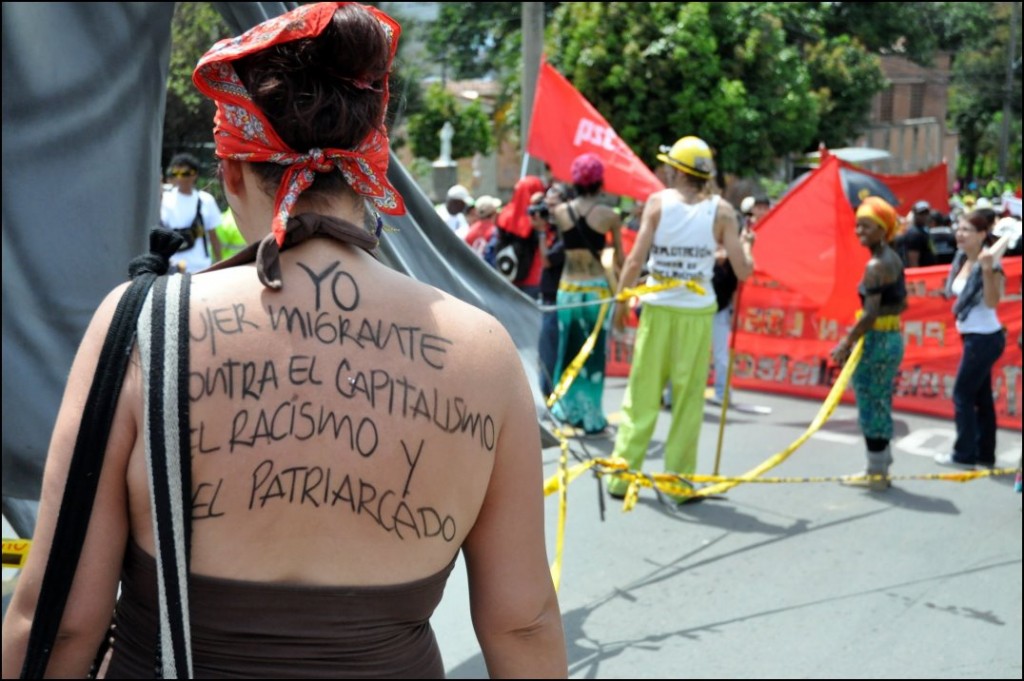 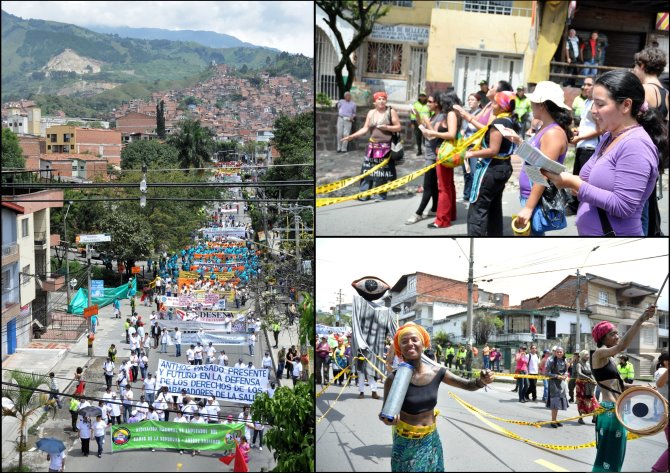 And the colors were brilliant in Medellín on the first of May 2011.  Over two thousand people representing the fight for legal justice, political change, the rights of workers and the status of women got out their banners and their loud speakers and headed for “la marcha.”  I spent the morning before the march with a group of feminists from La Red Juvenil, a youth network in Medellín, who sang and painted themselves in excited anticipation of the protest.  One of them told me she had decided not to attend the march.  “Sometimes there is trouble with the police, and you have to run,” she said to me that morning.  “Le pasa,” she said.  “It happens.”

The avenue designated for the march was lined without pause by police.  The officers justify their heavy presence at the annual event as necessary for quelling disturbances to the procession.  Often groups of students from the local university who are impatient for change and not interested in non-violence will find ways to interrupt the march.  But it was clear to some attendees that the police also come in great numbers as a form of intimidation to peaceful protesters.

Photos: Police presence at the march.

Students did create unrest this year by throwing rocks and setting off small explosives amid the march.  The branch of police specializing in public disturbance called ESMAD, Escuadrón Móvil Antidisturbios (Mobile Anti-Riot Squad), filed in without hesitation and tear-gassed several parts of the long line of marchers in an effort to disperse the crowds.  During the tear-gassing, my companion in the march grabbed my hand and forced us through the masses and down a side street.  Through our red eyes, our wet faces and our struggle to breathe, he told me that “you have to run.  Everyone has to run, because the police will capture anyone.”  Arbitrary arrest, especially of young people, is a serious problem in Medellín, and is the focus of IBJ’s JusticeMakers project in Colombia this year.  Before the green gas over the dropped banners had dissipated, 27 young people had been detained.

Banners were recollected and most scattered protesters returned, and the march continued.  When another individual was detained and held in a police truck parked within a gas station, the crowd surrounded the area and demanded his release.  The ESMAD drove a high-pressure water cannon tank to the scene to subdue the unrest, but the protesters were successful and the man was released into a jubilant crowd.

Photo: Water cannon tank is driven to meet black-clad ESMAD police gathered beneath a gas station at the march.

The other detainees were not as fortunate.  Later in the day with several lawyers and JusticeMaker Adriana, a lawyer and activist in Medellín, I visited the police station were over half of them were being kept in callous conditions: outside the building between an exterior wall and an impromptu police barrier.  When Adriana approached the police chief to gain permission to interview the detainees, she was met with aggression.  “No me presione!” he shouted.  “Don’t press me!”  After heated discussion she was allowed to speak with them from the other side of the barrier, but was eventually forced away by the ESMAD who created a second barrier with their shields between the group of lawyers and the detainees.  In this manner the detainees were effectively denied their right to legal counsel.

As events like these continue, so the march continues.  JusticeMaker Adriana and many other lawyers and activists in the city are dedicated to protecting youth rights and exposing police abuse of power in Medellín.