Buhle’s team recently visited the Kaphunga Village area to train community police. They were taught about private arrest, admissibility of evidence, presumption of innocence and the Swazi judicial system. They were given a warm welcome by the local chief, who expressed his appreciation for their efforts to educate his people on matters of such importance. He even invited them back to conduct a workshop with the inner council members. 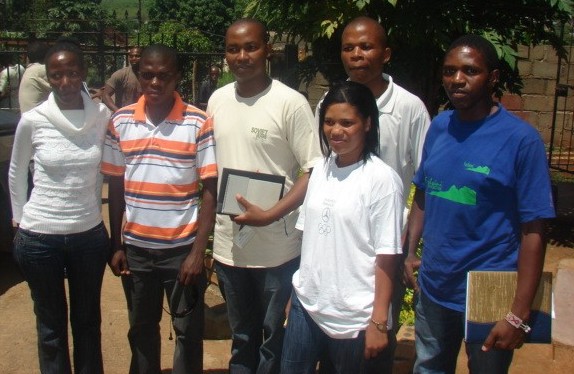 Buhle and his team, from right: Alfred, Sibusiso, Gugu, Buhle, Phakama and Tengetile

Despite this success, Buhle’s team has experienced some setbacks. They had scheduled a workshop on Monday, February 21st at the town of Big Bend, but it was suddenly cancelled without explanation. They managed to reschedule for the beginning of March, only to find that they had been cancelled yet again. One of Buhle’s contacts named Sabelo – who works with a grassroots youth empowerment organization in Big Bend – went to investigate the situation. From what he could gather, it seems that the problem with the team’s involvement stems from the local leadership. He was questioned by community leaders, who appeared very cautious and suspicious about his intentions, but eventually referred him to the Sphofaneni police station. While the station commander was agreeable enough, Sabelo was accused by some of the other officers of overstepping his bounds and prying into matters that do not concern him. They asserted that the trainings on human rights would not be good for the people, and they would not receive permission to hold them there.

A further setback includes the failure of State Police to grant Buhle and his team access to train the troops; however they are still in negotiations and hope to come to an agreement soon.

Swaziland operates under a dual legal system. in which only the most serious cases are tried by Magistrates courts. Those who are left to be tried before Customary courts are legally mandated to face the judge without the benefit of legal representation or the presentation of evidence in their favor. Buhle’s JusticeMakers team attended a Customary court session and introduced themselves to the court orderly, who also happened to be a police offer. She put them in contact with the police station commander, who was intrigued as to why they were interested in the Customary court as opposed to the Magistrates court, but ultimately welcomed them and gave them the go ahead to proceed with their mission in the jail.