IBJ Syria was launched in 2017 with the establishment of a Defender Resource Center in Aleppo. In the context of war, access to justice is often made more difficult, and many regions of Syria are without systemic legal aid, leaving many vulnerable Syrians deprived of legal protections. By strengthening the capacity of Syrian lawyers to take on pro-bono legal cases, IBJ Syria helps to ensure that those accused of crimes are judged fairly in a court of law in Northwest Syria. 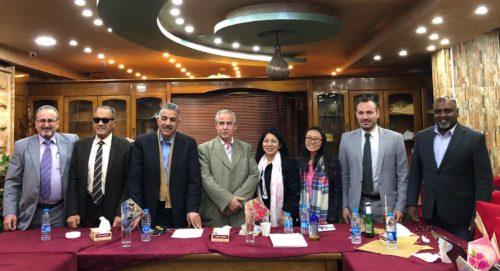 IBJ Syria was launched in 2017. Its program, Strengthening the capacities of Syrian justice sector actors, is supported by the International Legal Assistance Consortium in Sweden. Many regions of  Syria are without systemic legal aid, leaving thousands of vulnerable Syrians deprived of legal protections. By strengthening Syrian lawyers to take on pro-bono legal cases, IBJ  helps to ensure that those accused of crimes are judged fairly in a court of law. This helps to reduce instances of abuse – which occur most often during pre-trial detention/investigation.

Despite having domestic laws and being a signatory to several international treaties that protect the rights of all individuals, the situation in Syria remains volatile and unpredictable. Traditionally, legal aid in Syria is only available for the defendant in the criminal court for merely one court session and the Syrian law does not grant citizens the right to a defender at the police station. Legal practitioners that IBJ had interviewed identified this as one of the major issues impeding the rule of law and paving the way for human rights violations and abuse. IBJ is the only organization in the entirety of Syria that provides pro-bono legal aid to Syrians quite early in the process i.e. at the police stations. Despite the strong efforts of committed pro-bono lawyers throughout the country, they are in vast need of financial and legal resources to ensure sustained legal counsel, and Syria is in dire need of skilled lawyers trained on the protection of human rights.

We are grateful to the EU for funding this programme.