When operating within a nascent justice system, support can come in a variety of ways.   Take Olivier Niyonizigiye, a 2008 JusticeMakers Competition Finalist.   He took the entire week off work to assist the IBJ team in the lead-up to our July Criminal Justice Training Event in Bujumbura.  He also provided a summary document of Burundi’s latest penal code – passed on April 22, 2009. 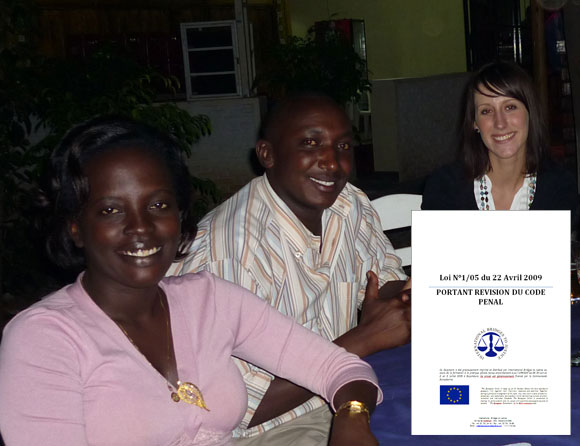 Above: 2008 JusticeMakers Finalists Carine Murekerisoni and Olivier Niyonizigiye assisted Fanny Cachat and IBJ in preparations for our July 2009 Training Event in Bujumbura.  Among their contributions – a version of Burundi’s latest Penal Code (on right), which IBJ was subsequently able to distribute widely to participants in the training event.  (Photo by Laura Dix.)

The latter of the two contributions might seem trivial. It was anything but. Though many people in Burundi were aware of the code – few had a copy they could reference. Among those in need –  Bernard Sekaganda – the head of the judicary police of Burundi.

The document created a sensation.  Though the 100 copies nearly doubled the number of participants in attendance, the IBJ team quickly ran out as defenders, magistrates, police and prison officials sought the code on behalf of their colleagues in the provinces.

After the training had finished, IBJ’s staff in Bujumbura had yet to satisfy the demand. Several times a day, people who had heard about the training stopped by the office to request copies of the code.  They would knock on the door, chat with Astere and the IBJ team, and leave with a promise that more copies of the code would be available shortly. 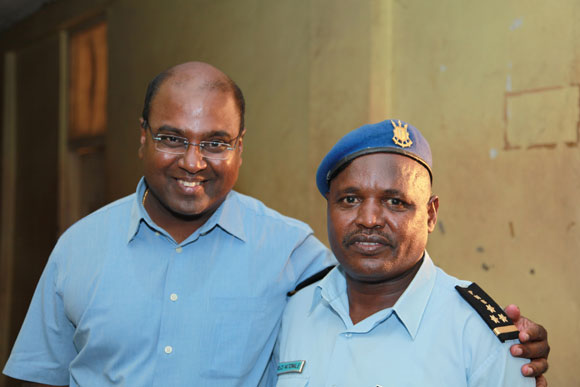 Above: IBJ Program Director Sanjeewa Liyanage with Bernard Sekaganda – the head of the judicary police in Burundi, a participant in the training, and the recipient of a hard copy version of the new Burundi Penal Code. (Photo by Nathalie Mohadjer.)

IBJ has since printed 50 additional copies and – through the subsequent distribution – is becoming a long-overdue resource that the Burundi legal aid community desperately needs.

Sometimes the key to human rights reform is simply putting the law in the hands of the people empowered to uphold it.