Mercy Cheredi has recently begun working for Evans as a communications intern. She’s 25 years old and has a son called Denzel. Mercy plans to pursue a career in journalism and will be using her skills and talents to promote Evans’ JusticeMakers project through photographs, interviews and reports. Working on the ground in Kenya, Mercy has been the ‘eyes and ears’ for IBJ and contributed to this report. 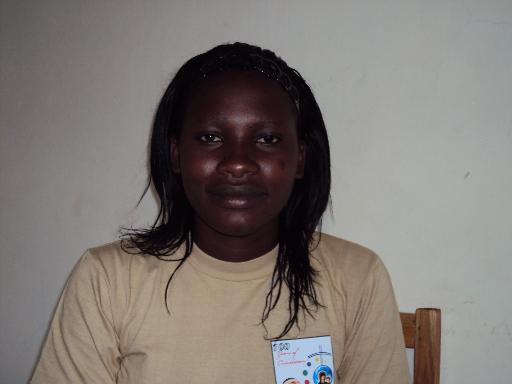 In addition to the seminars and group discussions he has held so far for his JusticeMakers project, Evans Muswahili recently obtained a permit from the ‘National Environment Management Authority’ (NEMA). This enabled him to hold a roadshow on 6th March on the need for criminal justice reform in Kenya. NEMA is an institution of the Kenyan government that controls and manages the environment, including for example, regulation of noise pollution. Evans encountered delays for the roadshow because a permit is required from NEMA that will allow noise from the roadshow to extend beyond 30 meters – the legally enforced boundary. 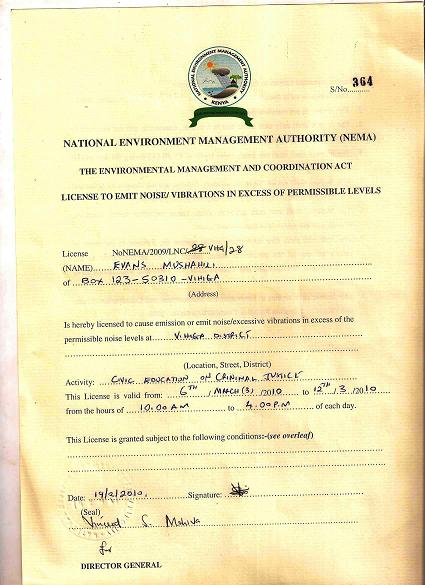 Permit authorised by NEMA, an institution of the Kenyan government.

Evans is using his grant to help women in the Vihiga district of Kenya who suffer from discrimination and violence because out-of-date practices continue to be upheld in his community. He’s working to end gender-based injustices such as forced wife inheritance and underage marriage by enabling women access to the correct legal procedures. Before Evans’ JusticeMakers project, women were confronted with corrupt judicial officials, employers and village chiefs, with nowhere to report their injustices to, and no way of accessing a fair trial. 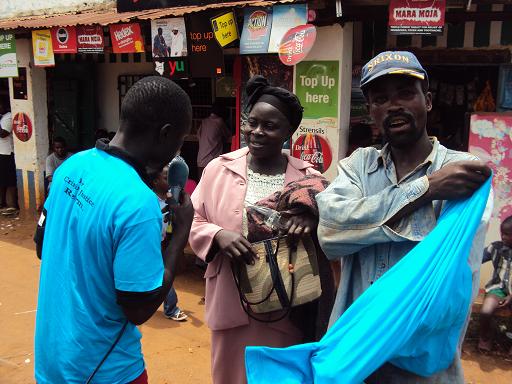 Over the past few weeks Evans has been busy with the logistics and preparation of the roadshow, including: hiring two vans, a public address system and creating publicity materials such as posters, brochures and radio adverts. Fortunately, he had a long list of volunteers willing to participate and help in the roadshow! The roadshow was held on 6th March and was used by Evans as an opportunity to promote his JusticeMakers project and generate public awareness of the work that he is doing. The day before, Evans and his team drove a van through the market towns and used the loudspeaker to publicise the event. 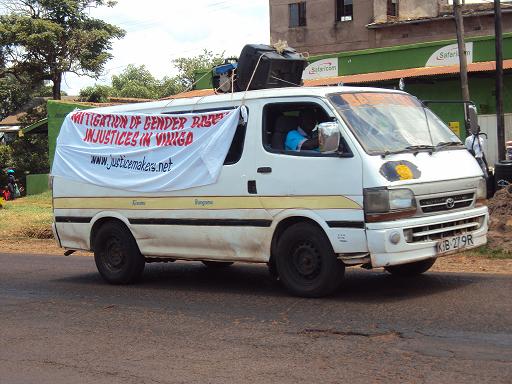 The van Evans hired for the roadshow.

For the roadshow, Evans and his team went to the Vihiga and Sabatia Districts of Western Kenya. Roadshows were held at Majengo and Mbale market-towns in Vihiga district and Stand Kisa market and Chavakali shopping centre in Sabatia district. 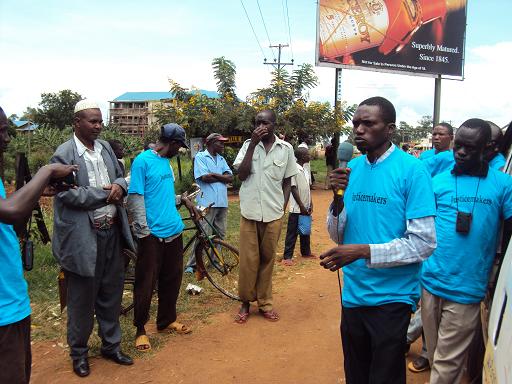 Evans (pictured with the microphone) addresses participants at Mmbale market.

Using the hired public announcement equipment Evans discussed the issues his JusticeMakers project is seeking to address, with a particular focus on the need for criminal justice reform in Kenya. During his speech, Evans talked about arbitrary arrests and detainment and the torture of suspects at the hands members of the police force. He challenged the community to take the lead in criminal justice reform and end the culture of bribing the police. He asked the public to support the police by volunteering information on wanted criminals. Evans explained that this was being encouraged and facilitated through the Kenyan government, and he urged citizens to make use of the recently passed ‘Witness Protection Act’. The Act was passed by the Kenyan parliament to guarantee the safety of witnesses through the establishment of a Witness Protection Agency. 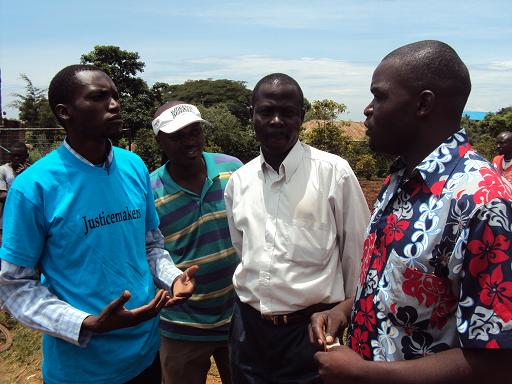 As a concluding statement at each and every venue, Evans reminded women that his Justicemakers project sought to amplify their voices in their pursuit of justice. To this end, he invited them to share with him their concerns and opinions on the issues he had raised at the roadshow. 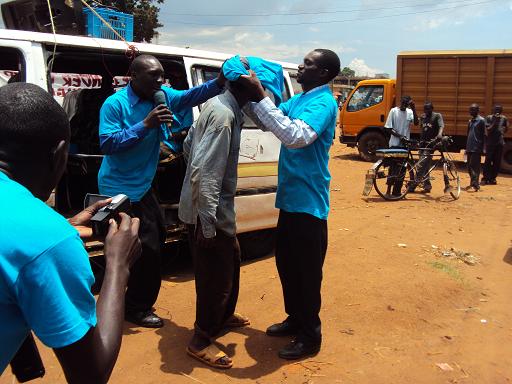 Evans (right) and his team of volunteers award a participant of the roadshow with a JusticeMakers t-shirt.

During the roadshow, Mercy talked with participants in private about their concerns and problems with the criminal justice system in Kenya. Mrs. Rhoida Lugovane, aged 39, explained to Mercy that her cousin operated a bicycle taxi and was arrested after one of his passengers lost their luggage. He is merely a suspect – effectively he is innocent until proven guilty – however, he has been waiting in prison throughout the three years his case has spanned. Mercy learned that due to lack of evidence the case is likely to be thrown out of court. This is just one example of the many individuals languishing unnecessarily in Kenya’s prisons.

The total number of people reached by Evans was 400, with an average of 100 people per roadshow.  Members of the public who attended include: traders from the markets, vendors of a wide range of products like newspapers, fast foods and other refreshments, bus passengers in transit and bus ticket sellers.