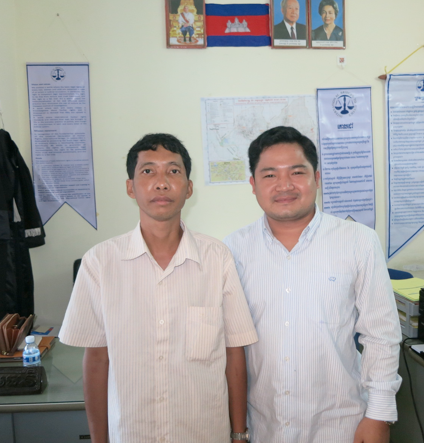 In June 2013, while riding his moto home from his mother’s place, a man named Kheng[1] was arrested by the police in Kampong Thom province. He did not understand what was happening, and got into a fight with the police officers at the moment of the arrest. They brought him into police custody to interrogate him. In fact, Kheng had been arrested in suspicion of being the perpetrator of a violent theft which had occurred the previous day in Siem Reap province. Kheng himself wasn’t even aware of this incident as he was in no way involved. Alerted by their colleagues in Siem Reap, the police officers in Kampong Thom were looking for suspects and had decided to arrest Kheng as he drove by, possibly because he had been charged in the past with use of an illegal weapon.

While in police custody, the victim of the offense came from Siem Reap to identify the suspect. She firmly denied that it was Kheng, recognizing that his physical appearance was very different from that of the criminal. Nonetheless, the police decided to keep Kheng detained for further interrogation. Kheng told them upfront that he did not know anything about the offense and that he was just driving home from his mother’s place at the time of the arrest. However, the police officers wrote in the records that he had committed the offense and pleaded guilty. Unfortunately, when the police officers gave him the records to sign, he was not able to read through them correctly; the light was faint and his eyes were bruised due to the prior altercation with police officers. These circumstances resulted in Kheng being sent to prison in pretrial detention.

Luckily for Kheng, he had heard about IBJ through the organization’s radio broadcasts which explain what a legal aid lawyer is and how to contact the nearest provincial Defender Resource Center. After two months in pretrial detention, he was finally able to ask his family to contact the IBJ lawyer in Kampong Thom province, so there was an IBJ defense lawyer available to represent him at trial In February.

As the police records were wrong, Kheng delivered a different, but true, version of events at the trial. The lawyer raised the issue that inculpatory evidence was only coming from the police records. He called Kheng’s mother to testify before the court, providing an alibi for her son as they were together before the arrest. He also called the actual victim of the incident, who reiterated that Kheng was not the perpetrator. Finally, the IBJ lawyer stated that the Cambodian Constitution and Criminal Code maintain that the accused should always be given the benefit of the doubt. By May the judges issued their decision, resulting in an acquittal for Kheng.

In total, Kheng spent 9 months and 21 days in prison. He was detained in a 10 by 5 meter cell, over-crowded with more than 60 prisoners. He could only meet his family once or twice a month for 10 to 15 minutes each time. Though he strongly felt the injustice of his situation, he remained confident that he would see justice. He was worried about his wife as well, who was pregnant with their second child at the time. She was left alone to tend to their farm while he was detained.  Fortunately for Kheng, he had learned about his right to a lawyer from IBJ’s radio program. He is very thankful for IBJ and their work and will continue to spread the word about the existence of free legal aid services.