Paving the way to access to justice for the accused with a focus on women in particular.

December 18, 2018  Geneva, Switzerland.  The IBJ Syria project team members, with the help of Hasan al Mousa, Secretary of Aleppo Bar Association and IBJ Coordinator in Aleppo, successfully conducted two breakthrough roundtables addressing much needed justice reform in a country in preparation for the post-war era. The first roundtable held in Aleppo in November 2018 was titled “Early Access to Justice for the Accused”, followed by a second highly successful one in Idlib early December which discussed “Early Access to Justice particularly for Women and Children”.

Both events were integral milestones of IBJ’s Syria Program, “Supporting and strengthening the capacities of Syrian justice sector actors” (launched in November 2017) which is supported by International Legal Assistance Consortium (ILAC) in Sweden through a project funded by Swedish International Development Cooperation Agency (SiDa).

Although the Syrian law is the country-specific law that IBJ employs within its work in Syria, the law contains key areas that are incompatible with international human rights standards. For example, the Syrian law does not grant the accused the right to silence nor does it give the accused the right to counsel during the detention process.  Husein Bakri of IBJ Syria comments:

“These loopholes often create an environment for violations such as torture, forced confession, illegal detentions and unlawful arrests to occur. As a result, detainees and the accused may face an unfair procedures, or worse, they may be denied due process altogether, ending up in criminal security branches.” 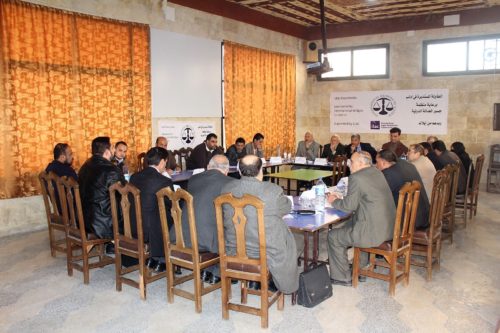 While citizens of countries with an established Rule of Law and equal opportunities for women may not see it as a success, it was indeed exactly that for our Syrian country team:  There was one woman among many men discussing “Early Access to Justice in Particular for Women and Children” at the roundtable held in Idlib  December 13, 2018. This is a breakthrough, perhaps best expressed in the words of Laila Adolaat, a Syrian human rights lawyer at Chatham House during the seminar highlighting ILAC’s key findings from their 2017 Justice Sector Assessment in Syria:

“The struggle for control over the justice sector has been described as a dance, but we should never forget that this is a dance where one of the dancers is a lawyer and the other has an AK47,” said Laila Adolaat, a Syrian human rights lawyer at the Women’s International League for Peace & Freedom. “One should also note that this is not a dance for everyone,” she continued. “There are no women participating in this dance, only men of a certain class and with the right connections. It is repeating a pattern that is at the heart of the original conflict in Syria.”

At the core of the discussions held by a group of lawyers, judges, and Free Syrian Police (FSP) officers was the issue of early access to justice for women and children. They emphasized the importance of facilitating defense procedures in order to give women and children better access to justice in the early stages of the judicial process, for instance at police stations. They stressed the importance of providing vulnerable groups, particularly women and children, with the means to be able to access their rights; namely, the right to a legal counsel.

As per the Justice Sector Assessment 2017 report by ILAC, Status of women in Syria, women face particular threats and challenges when they come into contact with the Syrian justice system. The report states that, “The extent to which existing Syrian laws explicitly afford greater rights to men than women, (…), has had a continued impact on the status afforded to women in areas that have fallen outside the control of the government after 2011.”

It further explains that the legal aid system in Syria is ineffective although it’s stipulated in the law, and lawyers generally do not accept pro bono cases. While the cost of obtaining a lawyer is a barrier to access to justice for both men and women, lack of pro bono services may disproportionately impact women, as they often lack control over household finances. Under Sharia law, a husband must provide for his wife, including legal assistance if needed. However, that does not happen all the time. Men generally control the family finances, which can result in women’s inability to retain private legal assistance.

Similar to the Aleppo roundtable held in November 2018, the event received national interest from the media and was reported on by al-Jisr TV, recorded in Arabic on YouTube.

(Please note, we will update this release with an English subtitled version in due course.)

Various actors within the Aleppo justice system convened on November 27, 2018, to discuss ways to enforce fundamental international human rights principles on which the Syrian law is silent, in particular the following three topics: early access to justice; the right to silence; and the relationship between the prosecution and the judicial police. All topics were followed through with an implementable action plan. Says Husein:

“The event was a valuable opportunity for lawyers, judges, police officers, and other actors in the justice sector to get together to discuss ways for preserving the dignity and rights of the accused and the need for a district attorney at police stations”. 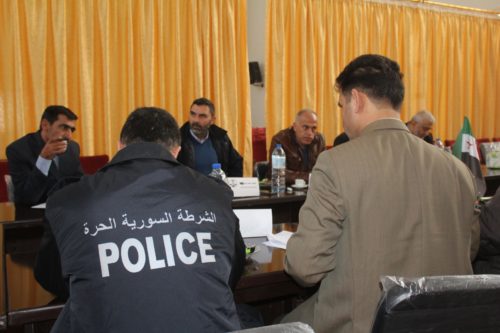 The one-day event was attended by the president and members of the branch of the Free Bar Association in Aleppo, including many judges of the judiciary, the prosecution, and the head of judicial inspection in the liberated areas. In addition, several officers of the “Free Syrian Police (FSP)” (dissidents from the Assad regime) FSP district commanders, and police departments in the liberated areas, as well as the head of the “Syrian Organization for the Abolition of Prisoners and Detainees” and a number of free Syrian lawyers contributed to finding solutions to much needed justice reform challenges.

Results and next steps 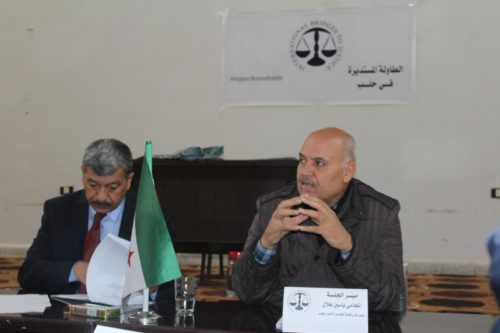 Discussing next steps and commitment at the Aleppo roundtable.

All stakeholders agreed to assign a public defender to anyone who is being accused at the early stages of the criminal justice process, as well as to ensuring district attorneys’ oversight of the police investigatory work during pre-trial stages. The participants also agreed to create a committee that will evaluate this proposed action plan. The participants further agreed to fix the loopholes within the Syrian law so that it could reflect and be more consistent with the international human rights standards and international treaties; the law should ensure the right to legal counsel and competent representation at all stages of the criminal justice process.

Participants inside Syria called it “First of its Kind”

The event was picked up by the media and was described by participants as the “first of its kind” in Syria. The Syrian TV channel “Orient” made a video report on the event citing part of the discussion on the right to silence. Orient also posted an article about the roundtable on their website, as well as Alkul Radio which reported on their site that the roundtable was a result of mutual collaboration between International Bridges to Justice and the Aleppo Bar Association.

(Please note that the TV footage in the YouTube link is in Arabic. A translated version is to follow.)

IBJ launched its Syria program in 2017, making it the most recent project that the international human rights organization is involved in. There is a great need for access to legal counsel in Syria, with many regions of the country deprived of systemic legal aid leaving hundreds, if not thousands of vulnerable Syrians deprived of legal protection. Given the fact that Syrian lawyers are highly reluctant to accepting pro bono cases, IBJ is focusing on assisting lawyers in Syria on pro bono legal cases; by doing so, IBJ ensures that every woman, man and child accused of a crime is judged fairly in a court of law to reduce instances of abuse – which most often happen in pre-trial detention, and during investigations.

IBJ’s assistance is rendered by building the capacity of lawyers through training, engaging justice stakeholders through roundtable events, and empowering local communities through legal rights awareness campaigns. Nonetheless, to maximize resources within Syria, IBJ intends to leverage the power of technology to increase its impact and reach, particularly with strengthening the capacity of lawyers and raising awareness of due process rights. IBJ is in the throes of publishing a defender manual to further supplement the legal materials available to lawyers to build their abilities, and to provide them with practical skills that can be used with immediate effect.

This approach will provide IBJ with valuable opportunities to participate at a crucial juncture in maintaining and improving the Syrian criminal justice system.

ILAC is a Swedish non-profit organisation that gathers wide-ranging legal expertise and competencies from around the world to help rebuild justice systems in countries that are in conflict, post conflict, or in transition toward peace and democracy. ILAC started its involvement in Syria with the provision of civil registration services in 2014. In 2017, ILAC expanded their activities to support Syrian legal professionals who will be instrumental in restoring the justice system in a transitional justice process, and this is precisely how IBJ fits in as a partner, together with the American Bar Association Rule of Law Institute; Central and European Law Initiative; International Bar Association Human Rights Institute (IBAHRI) and the Raoul Wallenberg Institute of Human Rights and Humanitarian Law (RWI).

If you have any questions about IBJ’s country program in Syria, please contact: