After a successful Gala held in Bern on Saturday, today marks the start of the First Annual IBJ Fellow Summit, being held all week at the Heim Center in Geneva. After gathering the fellows and highlighting the main aims and goals of the Summit, the fellows each gave a presentation on their respective countries, highlighting the main problems faced, visions for the future, and suggestions on how to go about implementing change. While each fellow highlighted different problems, certain themes cut across cultures.

During the presentation, Indian fellow Ajay Verma quoted the Chief Justice of India, who stated that, while victims are the popular focus of criminal lawyers, the accused, many times are the victims themselves. The idea behind this statement is that, because of the highly prevalent rates of torture and coerced confessions in all of the countries the fellows are from, the general presumption that one is innocent until proven guilty falls by the wayside when one is accused. This reality, combined with over-populated prisons, a lack of lawyers willing to take on criminal defense cases, and institutionalized practices of torture in criminal investigations, all fellows seemed to generally agree that there was much room for reform in their respective countries.

While these fellows have only known each other, in most cases, for a very short amount of time, the common bond and vision of change and criminal defense reform certainly was the underlying theme of the day. As each presenter finished their presentations, the other fellows asked directed questions about their colleagues’ legal systems. The questions presented were clear indications that the fellows were intently listening to compare and contrast one another’s legal systems and challenges. What was most interesting about the questions asked was the commonality and understanding that cut across the countries.

While John Bosco Bugingo remarked that criminal defense cases were simply not willing to be taken on by attorneys because of the lack of money in this area of law, the rest of the fellows nodded enthusiastically, indicating that this problem ran across all systems they work in. What was also striking was the day to day difficulties criminal defense lawyers face. Many fellows remarked on the lack of Bar Association funding for pro bono defense cases, along with the apprehension of judges and police officers towards allowing the accused access to criminal defense attorneys.

Despite the difficulties faced, all of the fellows remain hopeful. As Karen Tse remarked at the opening of the day, the underlying theory of IBJ is that individuals can change the world, aided by the power and support of the community . As the fellows come together this week, this power is realized as communities, both global and local, come together in the name of criminal justice.  (The IBJ team – including our six country fellows – is pictured below.) 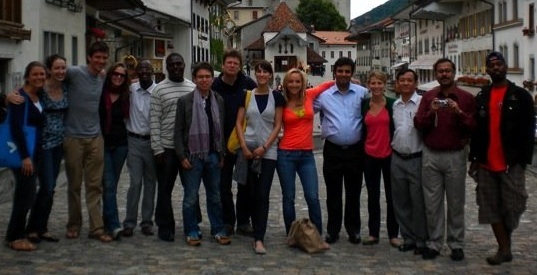