This past Friday 2008 JusticeMakers Fellow Buhle Dube held an event at local restaurant Quatermain’s with Swazi and international lawyers. Buhle hoped to spread word of the successes and challenges he and his volunteer team have encountered fighting torture and prisoner abuse. 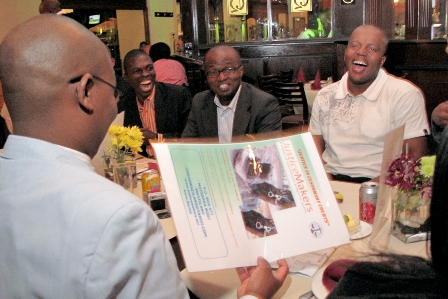 Attending the function were several lawyers from Swaziland and Bayo Akinlade, special counsel for Advocates International , out of Pretoria. 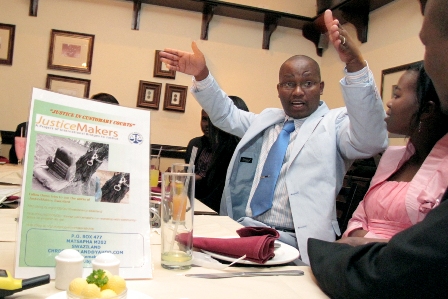 Above: JusticeMakers Fellow Buhle Dube, seated next to his wife, Audile, speaks to a group of lawyers and students during a dinner event to raise awareness and support for the team’s mission at Quatermain’s outside Lobamba, Swaziland.  (Photo by Nicholas Loomis)

Ndumiso Mthetwe, a specialist in labour law, was shocked when Dube explained the situation on the ground.

“When I look at these pictures and listen to this speech for a moment I wasn’t sure that this was happening here or in Darfur because surely these suggest horrendous acts of abuse,” he said.

Nevertheless Buhle noted the work, while in its early stages, has already made a difference.

“You may ask the question has there been change? It’s too early to tell but it could be that the little work we have done, talking to community police, has really had an impact. It could be that they have changed their methods of handling suspects,” Buhle said
Expressing his support for Buhle, Ndumiso predicted great success for the program.

“I believe that if such a thing can get publicity and coverage then it can go a long way to really informing people about their rights. We have people in our societies that are not conscious of their rights,” he said. 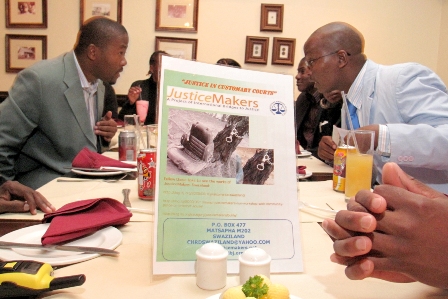 Above: Buhle Dube, right, leans over to speak with fellow attorney Knowledge Manana during a dinner event to raise awareness and support for the JusticeMakers’ mission at Quatermain’s outside Lobamba, Swaziland.  (Photo by Nicholas Loomis)

Buhle also discussed what was next for the JusticeMakers.

“Tomorrow morning we are heading down South to Lavumisa and on Sunday to Nhlangano. Working on the same project as well,” he said.

For Buhle and his team the work continues.