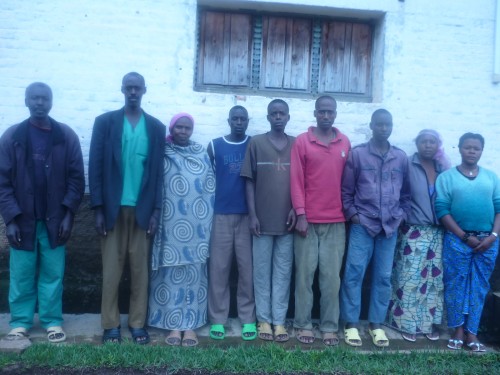 Five members of this family of farmers were accused of willful destruction of property. IBJ lawyer Janvier Ncamatwi managed to gain acquittal for four, but had to visit the jail to make sure they were actually freed.

During one of his regular prison visits to the prison of Bururi, IBJ lawyer Janvier Ncamatwi identified five family members who were imprisoned and awaiting their trial, accused of willful destruction of property. After having met with the clients, the facts showed that the family was imprisoned for rather strange and not very comprehensive accusations. Family disputes of neighboring families seemed to be at the source of the accusations. Maître Janvier followed up the cases and was able to obtain a positive outcome for almost every single one of them.

The five cases concerned a 71-year-old widow, her two sons, and two uncles. The widow and one of her sons were, at the time of the identification of the case, imprisoned for over a year and a half. The second son was younger than 15 years at the time of the crime, and consequently not criminally responsible. He should have never been detained in the first place, but was only freed after spending one year and three months in manifestly unlawful pretrial detention. The two uncles were arrested and detained after they were heard as witnesses in the same case in May 2010.

When Maître Janvier took up the cases, the investigation was already closed at the level of the Attorney General, but the files were not yet referred to the court in order to fix an audience. Within a month, he got the cases subscribed on the role of the court, and all persons concerned received a trial swiftly after his input.  All members of the family, except for one, were acquitted in the trial.

However, the strange story concerning their actual liberation indicates how a lack of working hierarchic control mechanisms and a similar lack of coordination between the different actors in the justice sector (specifically the prison and court environment) creates often absurd and damaging situations.

Normally, prisoners should be freed right after their acquittal. This rule is clearly stated in the Procedural Penal Code, and was confirmed in a Circular of the Federal Attorney-General. However, two weeks after their acquittal, the prisoners were not yet freed, together with two other clients of Maître Janvier who already sat out their punishment for over 2 months. Therefore, Janvier decided to visit the prison himself to make sure they were freed.

Janvier contacted officials to understand why his clients were not yet liberated, but they did not understand the situation either. The President of the Court did not understand why the acquitted persons, as well as those who sat out their punishment, were not freed. The director of the prison mentioned something about waiting for the appeal of the Attorney-General. However, no appeal was made yet, and even in the case of an official appeal, this would not be a reason to keep the prisoners imprisoned for a longer time, according to Burundian law.

It was only after Janvier made sure that both the president of APRODH (a well-known human rights organization in Burundi) and the director of the Directory-General of the Prison Affairs had contact with the prison director that all of the family was liberated except for one of the two sons, who was found guilty of a failure to the public security. IBJ then made an appeal, because the judgment that sentenced him to three years did not even indicate the principal crime.

Even after that, the disastrous events did not end for the family. The son who was freed in June 2010 because he was not old enough to be criminally responsible at the time for the crime of destruction of property, returned to his village, where two days after his liberation a girl was found dead. He was immediately accused of the murder, although no leads could be found that pointed toward him. The social stigma of being imprisoned probably had a lot to do with the accusations. However, since he already had the age of criminal responsibility, he was again detained.

This detention gravely affected this family of farmers because they lost cultural seasons and were not able to feed themselves after their release. The children in the family were also obliged to live with other relative families since their parents were jailed. However, after IBJ lawyer Maître Janvier helped them tackle the Burundi justice system, the accused were happy to go back to the farm, feed their family, and see their children.