In northern Cambodia, a 16-year-old boy was collecting scrap metal. Earning less than $50 a month with this work, he lived hand to mouth, struggling to feed his young wife and baby. Living in such extreme poverty means that losing a day’s wage has dire consequences. 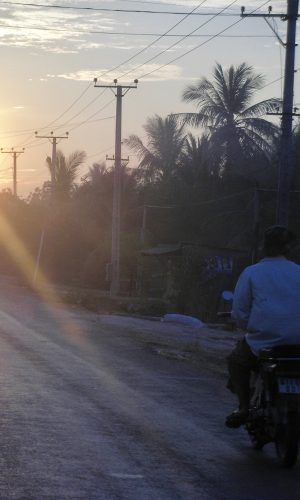 One day in August 2021, a young boy was collecting scrap metal when the police arrested him for theft. He had been accused of stealing a wooden chair and a small metal cart. He was very confused and frightened. He did not understand what was happening, was unaware of the circumstances of his arrest and no understanding of his rights. Contrary to the law regarding minors, he was questioned by the police alone, without a lawyer or guardian present. Despite all of this, he maintained his innocence. However, during the interrogation, he admitted that he sometimes used drugs. The police then added a charge of drug use and requested that he be sent to the drug rehabilitation center.

Consequently, the young boy spent the next four months in an overcrowded adult detention facility. Just before his trial, the court appointed a Cambodia Bridges to Justice lawyer to defend the charges. Due to a lack of evidence, our lawyer successfully had the case dismissed and the young boy returned to his family.

Detention for juveniles in Cambodia should be a last resort. However, limited access to legal aid and the lack of a strong juvenile justice system results in children being detained, beyond the legal time limit, in adult detention facilities and tried as adults. The system is punitive. Moreover, a lack of funding for investigations means that there is an overreliance on confessions or witness statements as evidence. And a fundamental shortage of lawyers means courts often appoint a lawyer at the last moment after a juvenile’s rights have been repeatedly violated.

Our work is essential for protecting the rights of children, and all people, in conflict with the law. A donor exodus from Cambodia has seen human rights violations skyrocket and the criminalization of poverty run rampant. COVID-19 has further exacerbated human rights abuses with people arbitrarily detained with little to no access to justice. Our work is more essential than ever. Donor support will allow our lawyers to continue to shine a light in the darkest of places.

Join us as we help build a justice system that is fair, transparent and accountable.