As an IBJ volunteer, I have been accompanying IBJ Fellow Ouk Vandeth (see image below) as he travels to the provinces to advocate for his clients. These trips have really opened my eyes to the state of the criminal justice system in Cambodia, the challenges Vandeth faces in his daily work as a traveling public defender, and the great need for the work IBJ is doing in the provinces. Once they are arrested, detainees wait in jail for months before they ever see a lawyer. This is quite shocking to me, coming from New York, where we kick and scream and bring writs if our clients aren’t arraigned before a judge within 24 hours of their arrest. At arraignment, they stand before a judge with a lawyer at their side to enter their plea, having already been informed of the charges, interviewed about the facts of the case, and advised of their options. Here in Cambodia, the situation is strikingly different. There are no legal aid services in 10 of the 24 provinces, a gap which IBJ is working to fill. These provinces get 15-20 new cases each month. The courts try to assign lawyers from Phnom Penh to these cases on an ad hoc basis, but there simply aren’t enough public defenders. So some people are never represented by a lawyer at all! 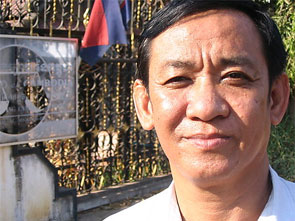 Vandeth is asked to take on many more cases than he can possibly accept. He travels extensively, driving or taking a bus for hours to several provinces each week. At typical day involves an early start for several hours on the road, a morning of client interviews in prison and meetings with court officials to file documents, another few hours on the road, and an afternoon trial in another province!

When we visit our clients in prison, we are not allowed to photograph them in their prison issue clothing – royal blue shirts and trousers with a broad white border – nor were we allowed to see the inside of the prison cells. We meet clients in either a separate interview building, or as is the case in Kampong Chnang, at a wooden table outside the fenced in prison yard, with guards at a table behind us. Both men and women gathered in the dusty yard, drawing water from a pump, working with tools, or resting in the sliver of shade cast by surrounding buildings. A few kids were running around – very young children are allowed to stay with their mothers when the mother is incarcerated. Looking at all these people, I am struck by the fact that many of them will go through the court system unrepresented, and will spend many years in this very yard, imprisoned without access to justice.

In Pursat, we attended an inquest, a pre-trial proceeding where the investigating judge questions the accused and records his testimony as part of the fact-finding process. A defendant is questioned three times before the case goes to trial – once at the police station, once by the prosecutor, and once by the investigating judge. He has a right to have a lawyer present during all three of these interrogations. But due to the shortage of public defenders, this rarely happens. Our client, a young man I will call “K,” is charged with rape. Vandeth only received the case from the court after K had been interrogated by both the police and the prosecutor. The court papers say that he confessed to the crime at the police station. K says that asked his girlfriend if he could kiss her. As is typical in Khmer culture, she did not respond verbally. So he kissed her. That is all that happened – nothing more than a kiss. When K was arrested, the police asked him if he had raped his girlfriend. He did not understand what the word “rape” meant. Without a lawyer to advise him, scared, confused, and completely unfamiliar with the law, he said “yes.” The same thing happened when the prosecutor questioned him. K was arrested three months ago. He has been in prison ever since. The day of the inquest was the first time K had a lawyer. Vandeth has petitioned the investigating judge to send a report to the prosecutor urging him to dismiss the charges, but it is unclear what the outcome will be. In all likelihood, K will remain in prison for another 2-3 months until his trial.

This case illustrates the urgent need for rights awareness programming and for more public defenders in the provinces. We hope that our community outreach programs will reach rural young men like K, to teach them about their rights and educate them about the law. We hope that one day soon, there will be an IBJ lawyer at a newly established provincial defender resource center, to represent every defendant from the time of their arrest. We are striving to make sure that no one has to go through the system alone.