Karen Tse, founder and CEO of International Bridges to Justice (IBJ), a nonprofit, nongovernmental organization devoted to ending torture through the fair implementation of criminal laws, was honored by the Harvard Divinity School Alumni/ae Association with the 2008 First Decade Award on June 3, 2008. 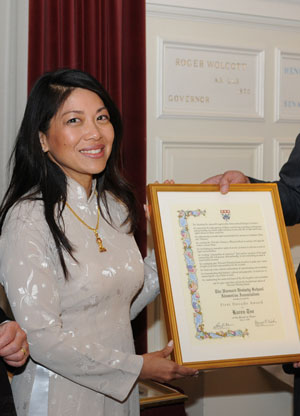 The First Decade Award recognizes an HDS graduate from the past ten years whose professional pursuits have demonstrated the values and skills developed at the Divinity School, and who is a source of inspiration and encouragement to all graduates. The honor was presented to Ms. Tse at the annual Harvard Divinity School Alumni/ae Dinner in Cambridge, Massachusetts.

While a student at HDS, Ms. Tse began to design the business plan for International Bridges to Justice, which she formally founded in 2000. IBJ operates with a particular focus on working with defenders and legal aid lawyers at the earliest stages of defense. Under Ms. Tse’s leadership, the organization has expanded its programming to Rwanda, Burundi, and India, and is now working to create a Global Defender Support Program that will provide assistance to public defenders worldwide.