The morning began with a session of qigong, hosted by Heim Center curator Eduardo Von Fellenberg, to focus and direct the fellows on the last day of the Summit. Much of the day was intended to aid the fellows in learning about the logistical aspects of IBJ, namely country evaluation, monitoring reports, and the importance of keeping accurate accounting records to secure long-term funders. Before heading off the International Red Cross Museum and the United Nations to celebrate the end of the summit and see some of the sights of Geneva, the Summit closed with a final feedback and brainstorming session, addressing both the challenges faced going forward and the lessons learned from the week.The common thread was the challenge faced by securing sufficient amounts of funds for criminal defense projects in each of the fellow’s countries. Picking up on the tools learned in the fundraising session, led by Pam Calhoun earlier in the week, Rwandan fellow John Bosco Bugingo brainstormed ideas on how to locally fundraise, suggesting the possibility of holding a ‘Give a Dollar for Justice’ radio spot on the local radio programs, whereby the majority of citizens in Rwanda will learn the message of IBJ and give. Burundian fellow Astère Muyango liked this idea, highlighting the importance of the radio in both fundraising and getting out the message of legal rights.The last fellow to speak was Ajay Verma, who commented on his pride in creating a ‘fellow task force,’ comprised of the six fellows present at the Summit this week.  Because of this week, Verma noted, the fellows were able to appreciate and fully understand the challenges, both alike and dissimilar amongst, of their colleagues around the world. With wide support, Verma suggested that the fellows act as a global support group to one another, continuing to be in touch with one another to discuss problems or challenges faced as they soldier on in the name of criminal justice. 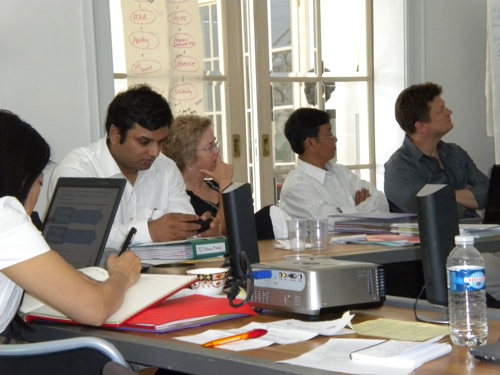