During workshops Buhle Dube and his JusticeMakers team held last weekend complaints from community police uncovered incidents of mob justice and torture. The team was in southern Swaziland at the villages of Matsanjeni in Lavumisa and Ngelane in Mazombizwe where incidents of prisoner abuse had been reported in the Times of Swaziland on 10 September 2007. 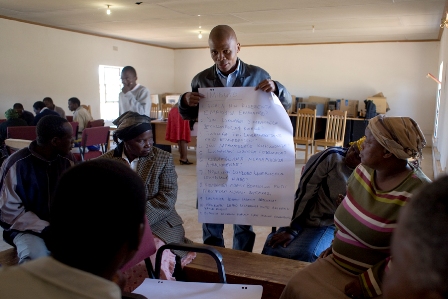 Above: JusticeMakers intern Sibusiso Nhlabaisi gives instructions for an exercise to a breakout group of volunteer community police officers during a workshop on prisoners’ rights and minimal force in the village of Matsanjeni in southern Swaziland on Saturday, June 27. (Photo by Nicholas Loomis) 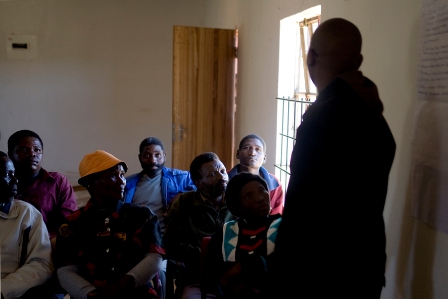 Above: JusticeMaker Buhle Dube, a law professor at the University of Swaziland, speaks to a group of volunteer police officers in the village of Matsanjeni in southern Swaziland during a workshop on prisoners’ rights and using minimal force on Saturday, June 27. (Photo by Nicholas Loomis)

The first workshop was at Matsanjeni where MP Qedusizi Ndlovu arranged a meeting with representatives of the local chiefs and around 30 community police.

Mr. Qedusizi acknowledged the reported incidents as cause for the workshop.

“What happened was that a young guy stole a chicken and when they pounced on him maybe he resisted arrest but being not trained they used excessive force and the person died.”

Refuting the claims, community police blamed a splinter group, which, they claimed, had killed four suspects in mob style punishments.

Clarifying the confusion one community policeman explained the situation.

“We do torture but we do not kill. Four people have been killed by members of the community who claim to be police,” he said. 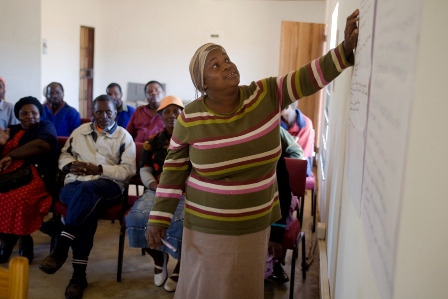 Above: A group representative presents a list of challenges facing the police in the village of Matsanjeni during a JusticeMakers workshop in the village on Saturday, June 27. (Photo by Nicholas Loomis)

In Ngelane, minutes away from the border with South Africa, the high crime rate has led some residents to desperation.

Community police have been arrested for abuse but policeman Mhlanga Simon insisted extreme measures were necessary.

“We’ve decided that if we find you stealing our cattle we’ll kill you,” he said. 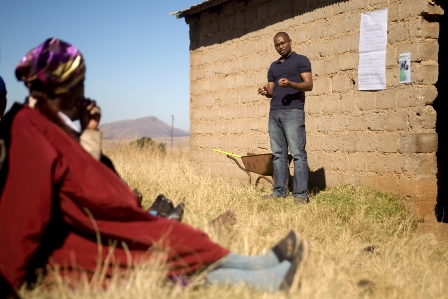 Above: JusticeMakers grant winner and University of Swaziland law professor Buhle Dube speaks to a group of volunteer community police officers on the use of minimal force in detaining and questioning suspects in the village of Ngelane on Sunday, June 28. (Photo by Nicholas Loomis)

Poor co-operation with state police and the perceived inadequacy of the law to protect the community were also cited as reasons for the use of torture. Samson Mdluli the chief of police in Ngelane confirmed some of this.

The breakdown in communication has forced community police to take the law into their own hands Mr. Mdluli continued.

“That has led to the community police having no confidence in the state police and that has led us to say what is the use of arresting a criminal who is going to be free tomorrow so let us just thrash them. Even though we appreciate that is wrong but that is the only way to ease our vengeance against the crime,” he said.

Dube promptly stepped in to clarify when police could use force.

“If you apply maximum force you are wrong and against the law. No force can be used to punish but it can be used to arrest a dangerous subject. Only the courts can punish,” he said during the discussions. 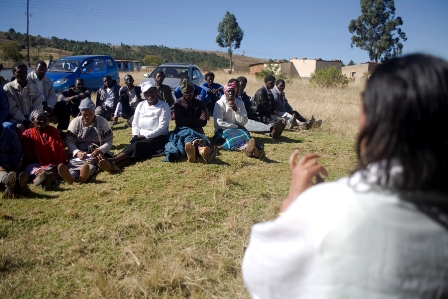 Above: JusticeMakers intern and University of Swaziland law student Gugu Simelane, right, addresses the challenges faced by the community police officers of Ngelane, Swaziland during a workshop in the village on Sunday, June 28. (Photo by Nicholas Loomis)

The JusticeMakers, accompanied by Bayo Akinade, special counsel to Advocates International, of Pretoria held discussions with both communities and law students from the University of Swaziland gave presentations on the Swazi court system and constitution including the concepts of bail presumption of innocence and how to use the minimum necessary force.

Robert Mkhatjwa, the head of community police at Matsanjeni, claimed the workshop helped educate the community police.
“It has equipped us with the necessary knowledge as far as apprehending a suspect is concerned.

“For now we’ll be very cautious as we are apprehending suspects because we know the grounds and we know the law now thanks to JusticeMakers,” he said through a translator. 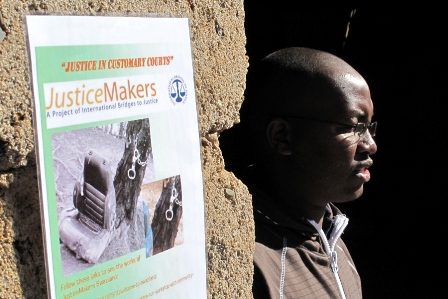 Above: JusticeMakers grant winner and University of Swaziland law professor Buhle Dube speaks to a group of community police officers in the village of Ngelane in Southern Swaziland on Sunday, June 28. (Photo by Walker Gunning.)