Tahir arranged an appointment for us to meet with Shahida Jamil, a well-respected lady barrister who (among several other current titles) was the former Federal Minister for Law, Justice and Human Rights in Pakistan.  Ms. Jamil would give us a tour of the “judicial complex” near the jail I’d visited the day before.The judicial complex is a small courthouse that Ms. Jamil donated as part of her own project to improve the justice process.  On the way there, she explained to me that she’d established this courthouse to help with the back-log of cases.  It was a small and somewhat temporary establishment (minimal computers, incomplete roofing design) that would work as a pilot project.  She selected the location near the jail because a huge reason for the backlog of cases, according to Ms. Jamil, is due to the expense of transporting the prisoners from the jail to the courthouse in the center of town. If successful, the government would hopefully throw its own funds into it and make it a larger complete establishment.  Unfortunately, the courthouse is not currently running ideally, and it has many problems.  Ms. Jamil and the LRF team, however, see hope.

Ms. Jamil wears an all white embroidered linen skirt and shirt set, her hair neatly arranged into a thick netted bun-like display, and a white matching scarf drapes and flows all over the place.  She gets out of the car with pride and faces the sign at the entrance: “FOUNDATION STONE LAID BY SHAHIDA JAMIL.” Tahir and I get out of the car, and Safi and Seema (two other LRF members) join as we walk through.  Ms. Jamil is greeted with respect and interest.  As we continue, Ms. Jamil points to a gate on the wall separating the courtroom grounds from the jail yards.  “The prisoners can enter through there, directly, without more than a 500 meter travel distance from the jail.” We follow her to the side yard of the courthouse, which was meant to be a visitation area.  She said the gates never held, and after some testing and investigation, large amounts of ammonia in the dirt hinted that the sewage from the entire jail had been backing up and released right in that yard.  It was supposed to make the connection to the city’s main sewage lines but plumbing problems prevailed.  I imagine that was the start of the problem: the initial costs suddenly got too high which deterred government efforts in the area.  Ms. Jamil said with some dedicated effort by attorneys and cooperation from the government, the sewage problem could be fixed and give way to a helpful establishment. 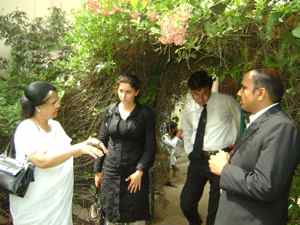 Barrister Shahida Jamil, IBJ intern and LRF members stand at the entrance to the judicial complex as Ms. Jamil explains the greenery is a result of a sewage back-up.

We then visit the women’s jail next door.  Ms. Jamil is to my side telling me that the sewage back-up has led to rats in the women’s prison “attacking the babies that reside with the women.”  Ms. Jamil’s tone is strictly business each time she opens her mouth.  I don’t know how much of a problem the rats actually are – It’s hard to imagine a rat the size of her arm (which she gestures to me is the size of them) in a place that looks so serene.

We head to the juvenile prison.  Classes are in session, and we visit a whole row of them.  Each time we enter a room, the group of boys stands and greets us in unison.  The superintendent follows us around, while Ms. Jamil goes and looks at the kids’ assignments and asks a few question.  Tahir a couple times steps forward with pride and announces, “Who doesn’t have a lawyer?!” and then hands several kids each a business card.

As Ms. Jamil continues to oversee the classes, Seema (LRF member) comes to me with a mischievous secrecy and says, “You know, we are checking, and each of the students only has one assignment in his book.  There was no work from any time before today.  They just set up the classes for when we are coming.  They got the kids in there and the teachers came, but they really don’t have classes going on regularly.”  Hopefully this is a sign that the officials understand the importance of education in the lives of youthful offenders, particularly while in custody.  Ms. Jamil and the LRF team certainly have their hands full, but they seem to have the sprit to make things happen. 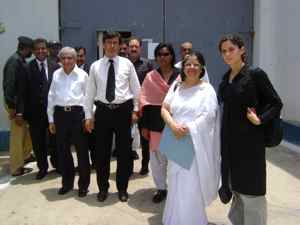