I needed money. A drug dealer wanted me to teach his dog how to bite. He paid me in cash. And so I did it. But the dog didn’t want to learn, it was hard work, but I taught the dog. One day the police came in searching for drugs. He’d stashed 50 kilos of weed in the dog’s house. I had to hope the dogs would bite. 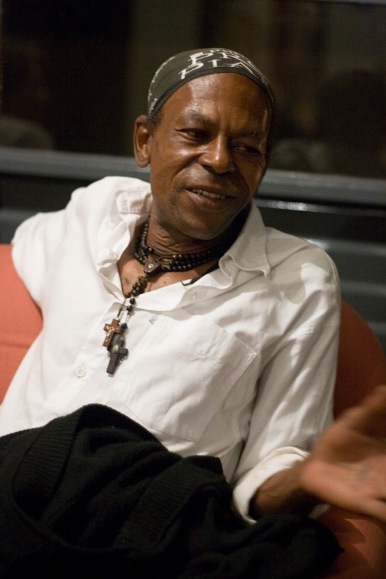 The police officers were too preoccupied with the dogs. They did not find the drugs. Bembem was allowed to walk out of the house with his life. Bembem is an older man who has been incarcerated so many times he lost count. He told his story of growing up in Brazil’s prison system:

“It doesn’t matter if you are in prison for one day, one week or one month, you are there one moment and you are part of the system for life.

Bembem was first arrested at age ten. His story began with his father leaving him in the trash at 6 months. Years later, he watched the same man beat his mother to death in front of him. His father sold everything in his house for drugs and alcohol. His daughter, who had frequented prisons to visit friends, was shot four times in the face in São Paulo.

“Rape in the cells is a big problem. Back in the military regime drugs were not a big problem. Now, do you know why more than 50% return to prison after their first offense? It is drugs. They can’t get drugs as good as they can in jail.”

For those looking for an introduction to the drug problem in Brazil’s jails, Ms. Cecilia Neves Silveira, IBJ’s in-country contact, recommended the popular film Carandiru which tells the story of drugs, sex and prisoner revolts in Brazil’s most infamous jail.

Bembem noted that young kids in the prisons come from a culture where “they kill at will.” He continued,  “Violence is scandalous. The kids come out of jail and must kill 3 in the street or be killed.”

Bembem revealed that in the jails he had to deal with sexual abuse from the other prisoners and the guards during the military regime. The guards could do anything they wanted. They were the law. Now only people who disrespect someone’s honor, or commit crimes against women and children are violated by the other prisoners.

In prison cleaning the jail cells was a daily chore. But Bembem noted,

“For some reason I never had to clean. People respected me. Wherever I walked in that prison I was respected. To this day I still don’t know why.”

Bembem now lives in Divinopolis and described his community as “very emotional. We are very attached to other people. We are very loyal.”

He now works a steady job training dogs in middle class neighborhoods. He thanks God for music saying “music was my redemption, if music didn’t enter my life I would have put a bullet in my head.”

Bembem left us with these words to describe how he felt about his community and his life:

“I hate the disloyal (…). I am a man with a heart, I don’t have time for this…You won’t understand. You’ll stay this way and never know my people. I know both sides of this city and I prefer them, my people on the street.”