During a free hour in a hectic weekend of workshops Buhle Dube, JusticeMakers grant-winner and law professor at the University of Swaziland, leaned forward and described how he decided to become a lawyer.”Well I think I was always going to be a pilot. Until when I finished high school and I said, ‘I’m going to be a lawyer.’ And the family said ‘No way.’

“That was my cue to say look this is the thing to do. When everybody says, ‘Don’t,’ just go,” he said. 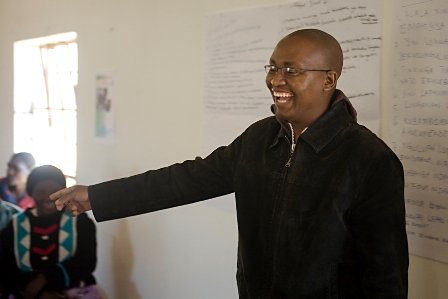 This philosophy has served him well while struggling to promote human rights in an African context.

Speaking from a guesthouse in Nhlagano, ahead of meeting with community police in Ngelane, Dube mused on the difficulties of this task.

“Its an African thing really to dismiss human rights as a western concept.

“The term human rights has been labeled un-African in most African societies. We have managed to train all these people without even using the word human rights,” he said.

Using practical terms instead of theoretical concepts Dube has managed to get his message across.

Dube believes however that the concept behind human rights is uniquely African.

“My take on that is always, look human rights are very African except we never call them human rights,” he said.

The concept of ubuntu, or humanity, is at the core of these beliefs. 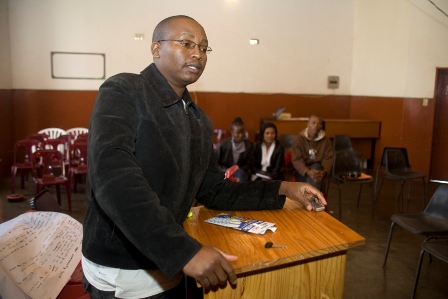 “If I violate you I violate myself. That’s an African concept ubuntu… It is not termed in human rights but it is the greatest human right ever,” he said.

Not content to philosophize Dube has sought to apply his ideas practically.

The JusticeMakers team has done just that, by holding workshops with community police, and Dube believes it is making a difference.

“The community police are appreciative of what we have done… In most cases the stuff that we deliver to them they’ve never heard of it before so it really does impact them,” he said.

Perhaps for the first time since choosing to be an attorney Dube is beginning to hear ‘Do’ as well as ‘Don’t’.