Legal Rights Forum arranged to visit a few police stations in Karachi today.  Two car-fulls of attorneys and I pull up to the Artillery Maidan Police Station in one of the high security areas in Karachi.  We are greeted in an air-conditioned room that feels like it’s stamping the cigarette-smoke smell into your clothes.  An officer seems happy to answer our questions.  LRF is concerned about the techniques of the investigation officers as well as the force’s awareness of the 2000 Juvenile Justice System Ordinance (JJSO) which provides that juveniles should be treated differently than adults.  Juveniles are not supposed to be hand-cuffed (unless the crime is heinous), they are not to be kept behind bars, and the ordinance provides strict rules about getting in contact with parents.

Of the few officers in the room, none of them have received any special instruction as to the JJSO.  Only one knew it existed, and he took us to a dusty framed poster on the wall of the interior of the station that had some juvenile rights outlined.  It was made and provided by an NGO called “Advocate,” but it was outdated and not payed attention to.

We then went into another room where another officer brought us the “tool kit” of the investigation officers.  He said proudly, “The officers have this kit with each time they make a single investigation.” 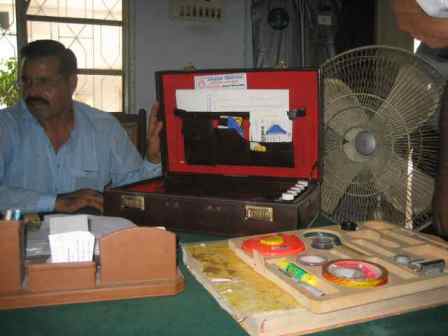 I looked for jars of glitter because I thought I’d seen this kit before in my kindergarten class on craft day.  I can’t imagine these glue sticks, plastic gloves and scotch-tape fingerprint set are the most reliable of methods on which a person’s freedom should rely.  The officer continues, “We do not use unfair methods to get confessions, only psychological methods…”  What does that mean?  Psychological methods?  I ask: is there a science to these psychological methods?  He says (as I understand through what was translated back to me), “Of course, medical students are trained in this.”  Javed, a friend of LRF who is with us on the visit says to me, “Sounds like not,” with an unfortunate smile. 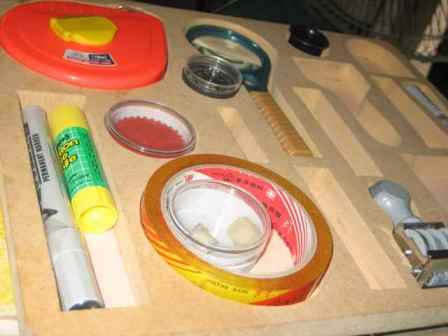 At the next police station, the Boat Basin and Clifton area station, we are greeted in another stale but cool room.  The officers here have the same lack of awareness as to the juvenile ordinance and nonchalant attitude about answering our questions.  They seem to understand that their responses are inadaquate, but don’t seem to feel responsible.  Here, as the officers realize the practices are not up to code, they admit suboptimal performance and cite lack of budget.  They simply don’t have the budget to get continuous training, they don’t have any information in their syllabus on the juvenile code, and they all admit their salaries are insufficient.  Javed looks at me during the salary discussion as a cue because I’d been asking the previous week about officers accepting bribes.

Another try at questioning the psychological tricks method: what are the psychological tricks?  An officer responds, “We look to see if the accused is jittery or anxious, sweating…”  Javed says, “Did you have any training in this?”  The guy directly says, “No, none at all.”  I was surprised that he seemed to know that that question ended it.  He didn’t even try to pretend he had some superior intellectual ability to judge guilt.

Safi of LRF hands over the framed posters citing several key sections of the Juvenile Justice System Ordinance, which the stations agree to post.  LRF, in its visits to each police station, also requests for the officers to fill out a simple questionnaire on the juvenile rights.  Tahir is compiling summaries of these questionnaires to draw attention to the lack of awareness in the police stations.