The past few weeks, Legal Rights Form has advertised excitedly about their Juvenile Rights Training Forum, and the day finally came. The key speaker was Mr. Abdul Maroof, Public Prosecutor and former Assistant Inspector General of the prisons of Sindh (Karachi province, Pakistan).

I thought I was going to be late because my rickshaw ride to Paradise Chambers (LRF office) took me to Paradise Center (NOT nearby). After a hustle, I arrived in the conference room to recall that punctuality is not the norm here. A couple hours later, after Javed and Safi, LRF members, opened the discussion of juvenile rights with an introduction of the Juvenile Justice System Ordinance (JJSO), Mr. Maroof arrived. Late but not to disappoint!

Mr. Maroof settled into the head desk chair of the conference room of twelve eager listeners (11 Sindh-practicing lawyers and myself). With a sip of water and a click into English mode, he jumped into a well-organized and passionate lecture even before the office-help returned with the tea and sweets! The topic was juvenile rights in Pakistan: what is lacking and who is responsible. Thus he divided his lecture nicely into sections of responsibility: Police, Judge and Prison Officials. The final discussion period even turned out to be an informal Citizen or Lawyer Responsibility section.

The police are responsible to inform both the parents and a probation officer immediately upon custody of the child. Currently, police are not making the effort to inform parents, and there are only 3 probation officers in all of Sindh (See US State Department Human Rights Report 2008). Children do not get the attention they deserve but rather sit in jail unnoticed. Police do not generally even request bone ossification tests to determine the age of a youth. “A child is a child ONE DAY before his 18th birthday!” Mr. Maroof emphasizes. 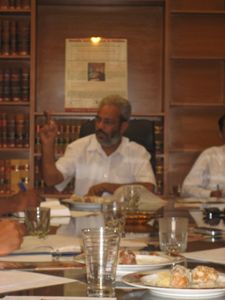 Mr. Maroof continues banging his hand on the desk when he discusses the importance of maintaining a child’s dignity, from arrest through the court process. Children are NOT to be handcuffed, NOT to be interrogated by officers in uniform, NOT to be judged by elevated judges in gowns and NOT to face the presence of the general public or media in court! Even in jail, children should not be ordered around by officers in uniform; they should have dedicated class schedules, should not live behind bars, and they should have access to both medical doctors and psychologists.

“Last night, as I left dinner to head back to the office, my son asked me when I would come home. I saw tears in his eyes when I said I would be late. I ask you now: if my son is upset to be detached from his father on a regular evening, JUST IMAGINE the mental state of these CHILDREN who have been torn away from home, sometimes without ANY contact to their parents. THIS IS A LOSS OF CHANCE!” 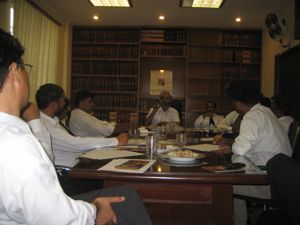 I am moved to hear a prosecutor speak with such compassion for the accused. Mr. Maroof says we must begin with education: training of police, judges, prison guards, more probation officers. He says Sindh’s Social Welfare Department must be more involved, rather than just the Home Department, in getting funds. I asked whether he sees hope in getting young attorneys (like the present group) connected to other well-intentioned more powerful people (like those running government-run legal aid programs) to cooperate in pressuring for government action. His eyes light up: “Yes! Of course! They can and will. I have a recommendation: please go approach the Home Secretary and ask to be a non-official representative to visit the prisons.” He says people have the right to request to see the prisons, but people do not request to do so. Giving attention is a step in the right direction.

Mr. Maroof seems delighted to see the interest of this young group, and I, myself, left with a curious smile. Throughout my time in Pakistan, I’ve worked both with people who have power to get governmental support as well as young lawyers who may be less-powerful but are seriously passionate. I feel that uniting these groups is the best chance for progress. And Mr. Maroof’s lecture, by one who works with the stronger side, reaching out to the younger group, symbolized a spark in the connection I’d been hoping for.