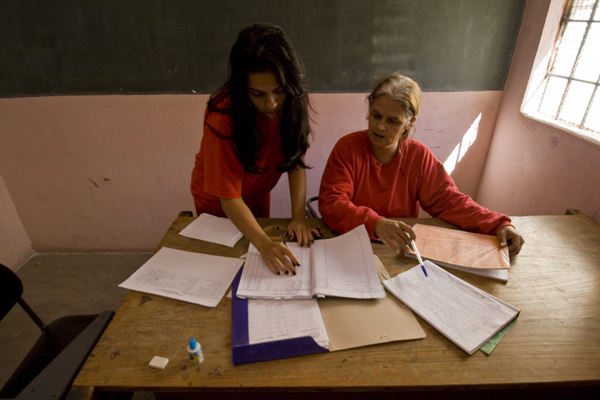 Above: Female prisoners work with donated library resources at the at Floramar Prison. (Photo by Michelle Ferng)

Paul Aussaresses was born in Saint-Paul-Cap-de-Joux of Tarn. In the prison libraries of Floramar, Brazilian prisoners may read his biography beginning with the Free French Forces, his role as the main executioner for Jaques Massu in the Battle of Algiers, and end with his legacy of death squads in Brazil that suspended the right to Habeus Corpus, also known as “The Great Writ.”

Aussaresses’ legacy continues to influence what Prosecutor Alessandro Garcia Silva calls a Brazilian culture that “perceives prisoners as enemies of the State.” Encouraging this culture was integral to Aussaresses’ program that normalized the suspension of rights such as Habeus Corpus in Brazil.  Habeus Corpus is a legal action that allows a person to seek relief from unlawful detention of themselves or another person. Habeus Corpus was suspended under the military dictatorships, especially under Aussaresses, and was not re-instated until 1978 under General Geisal.

Captain Eduardo, Director of Security at Presidio Floramar, a prison for adult offenders, said that prisoners in their libraries read Ausseresses’ biography which continues to influence their circumstances with the cynicism that because of him they have little influence over their own history. And so prisoners enlist in art class, they tell stories, they write fictions that narrate their own circumstances.

Prosecutor Alessandro Garcia Silva noted there is a lack of political will to improve conditions in the prisons. The art classes continue.

Prisoners tell the same fictions as before with the same re-used material until in Bairro Niteroi, or in Rio, a man so influenced by Aussaresses has begun an autobiography as if he was Aussaresses. According to General Manuel Contreras, Aussaresses maintains close links with the Brazilian military though he has been stripped of his Légion d´honneur and lost much credibility and respect in the international community. Aussaresses’ story is not too disimillar from that of the lost characters in Gabriel Garcia Marquez’s novel, Autumn of the Patriarch, a story described in the author´s words as “a poem on the solitude of power.” For those in prison who read Ausseresses they might understand solitude, though they know no poetry, only the deficits of power.

Informing the public about their rights to Habeus Corpus is especially important as Brazil is just beginning to officially recognize human rights violations. Republic Presidency Special Commission of Human Rights released in 2007 a groundbreaking work entitled ‘The Right to Truth and Memory.’ As one of International Bridges to Justice’s 2008 JusticeMakers Fellows, Dr. Aziz Saliba will soon begin production of a DVD that educates Brazilians about their right to Habeus Corpus. Michelle and I have only spent two days in Brazil but have already seen so much and are excited to begin working with Aziz on his project.