During the last week of July, IBJ organized a roundtable in the town of Bubanza, roughly 45 minutes drive from Bujumbura. The choice of Bubanza as the venue for this activity was not neutral as Burundi rural areas experience tremendous needs, often more acute than in the capital city where most of lawyers are working. There was also a clear willingness to show that IBJ is not forgetting those people and that our action won’t be circumcised to Bujumbura solely. Our local partner APRODH once again helped us in setting up the event. IBJ issued a certain number of invitations that were then distributed by APRODH regional office, in a more appropriate position to know which officials might be requested. The IBJ delegation came especially for that day from Bujumbura, alongside with 7 lawyers responsible for representing their profession during the session, as there is not a single lawyer registered in the province. 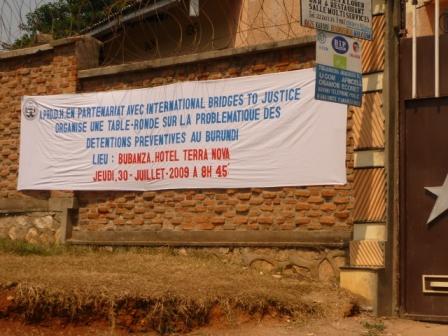 Above: Informing people in Bubanza of the upcoming roundtable event (Photo by Claire Habimana)

The group was finally made up of around 20 participants who discussed the central theme of pre-trial detention, and by extension the one of prison overpopulation. After a quick introduction by the Province Governor’s first secretary, it was first highlighted that prison overcrowding reaches an unprecedented level in Bubanza with 472 detainees for only 100 places available as for June 2009. Various explanations for this phenomenon were put to the light such as the lack of human and material resources, the absence of adequate training and, more worrying, cases of corruption. Participants were then split up in 4 groups corresponding to the 4 represented category of actors so as to find out possible remedies to that predicament. General suggestions were proposed like the increase of the State commitment in favour of the judicial system, bringing additional resources at their disposal. However, those broad solutions were deemed insufficient for the two organizers; that’s why participants were encouraged to devise quick and easily applicable measures that, as part of Burundi judicial system, they can commit to implement. 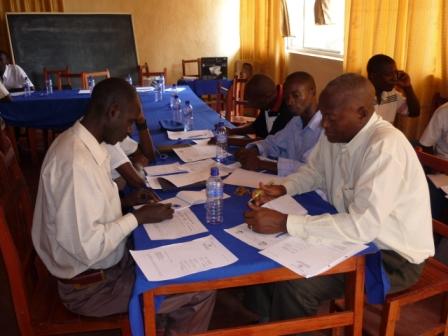 Results are very promising. Lawyers were the promptest to react: they suggested to take benefit of the judiciary vacation, in August, to visit Bubanza prison and point out irregular imprisonments or cases that could benefit from bail. Those cases would be then presented to a special council that could deliberate on their fate. The penitentiary administration was very keen to play the game and said they were eager to facilitate interviews with detainees. Magistrates were more dependent of their hierarchy’s approval to confirm their participation, but were not opposed to such a session held under their presidency. APRODH and IBJ were delighted by such news and promised to take part to this effort by respectively financing travel and accommodation fees for lawyers. The day also ended in a friendly and relaxed atmosphere with the widespread feeling that things significantly moved forward during the day. 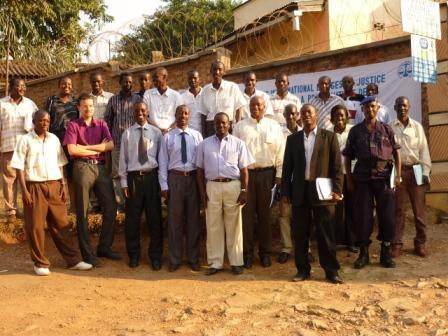 Above: Lawyers from Bujumbura, Magistrates, Prosecutors, Police Officers and Prison Officials from Bubanza joining together to propose and implement concrete solutions to pre-trial detention. (Photo by Claire Habimana)

Lawyers actually went back in August 12th and 13th in Bubanza. The first day was dedicated to consulting cases and meeting pre-trial detainees. Numerous irregularities were observed during that session. Those were presented to judges the day after. 7 imprisoned people were immediately released on bail. A total of 45 prisoners were freed in August from Bubanza prison, 9 of them serving the end of their sentence, but 10 being acquitted and 26 being granted bail. It is clear that this roundtable had a major impact on the outcome. All that to conclude that even with restricted means, good willingness and individual commitment can lead to tremendous improvements and plant the seeds for a systematic reform of the criminal justice system. 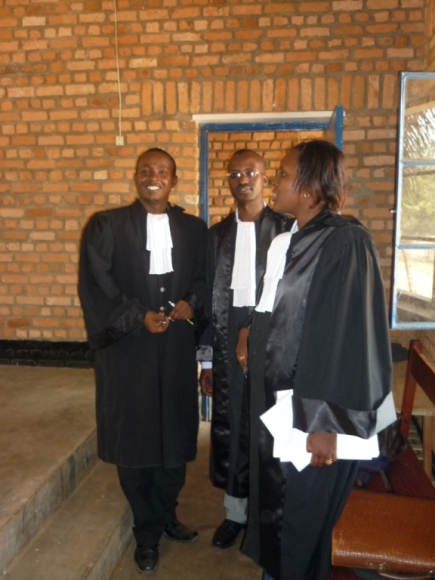 Above: From left to right: Lawyers Patrick Nukuri, Léonce Nimenya and Sonia Ndikumasabo, the young faces of hope of the Burundian criminal justice system (Photo by Claire Habimana)