Victory seemed so near that day.  After three visits to the Philippine National Police, two arrests and a trip to the Regional Trial Court (RTC) in Lucena, the one thing that was left to do for the farmers of Nilantagan in San Francisco, Philippines, was to wait —for the good news. Overjoyed in anticipation, when the news finally came it struck like a thunderclap:  “Case dismissed.”

First, there was disbelief. How was this possible? Everything had gone so smoothly. They had overcome the usual obstacles, had solid, irrefutable evidence of the crime, and the police had joined them to the court to strengthen their case. But then the farmers understood.  Of course it would be this way; it always had been. The prosecutor at the RTC, who had dismissed the case, was a cousin of their landlord Matthias. He was not interested in the rights of the farmers.

They felt desperate and defeated. “Where should we go now?” asked Rolando Zano, the leader of the farmers while tears formed in his bloodshot eyes. “This is all there is. We don’t have an alternative plan.” They had mobilized all possible actors and had exhausted their resources but to no avail. Once again, the farmers of Nilantagan were left empty-handed in their struggle for land rights. 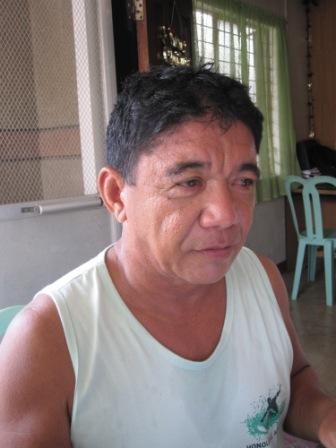 Above: Farmer leader Rolando Zano after hearing that their case is dismissed

It had been a long and arduous battle. It all began in 2004 when the farmers learned about their legal rights under CARP, which included the right to own land. In a strategic move, they filed petitions to become leaseholders of the land they cultivated. This would later facilitate  petitioning for outright land ownership.

Of the 25 petitioners, 19 farmers won their case and became official leaseholders. This was a significant victory. Instead of having to pay 70% in shares to the landlord, they now owed him only 25% per harvest.

Yet when the first coconuts were ready to be harvested, initial feelings of triumph quickly disappeared. The 25 petitioners, who all participated in the harvest, were evicted from their lands by Matthias. He subsequently filed petitions against the farmers, accusing them of qualified theft and malicious mischief. In 2006, JusticeMaker Jae Rosselynn de la Cruz, the farmers’ attorney, filed a motion to dismiss the criminal charges.  Unfortunately, her efforts   have yet to bear fruit.

For five years, the 25 farmers lived away from the land they cultivated. Without a fixed income, they tried making ends meet through fishing and occupying administrative jobs in nearby San Francisco. Some moved to Manila, adding themselves to the ever-growing wave of desperate job-seekers.

While keeping themselves and their families afloat, the fight in the farmers did not die out. Tireless,  they filed another petition in 2006, this time to re-affirm their rights as legal leaseholders. After months full of hearings and other court procedures, nine farmers were granted the right to be reinstalled in January 2010. The other cases were dismissed, supposedly for a lack of sufficient evidence.

Yet even for the nine farmers who were allowed to return to their lands, the trouble did not end. In the months after their re-installment, they were subjected to frequent harassment. The farmers received death threats, their property was vandalized, and their houses were burned down by armed goons hired by the landlord Matthias. Undeterred, however, the farmers kept farming, asserting their rights as legal tenants of the land.

And then it happened.

A few days before the farmers planned to harvest their coconuts, goons armed with machetes broke into the land and began loading their carts with the farmers’ coconuts. This went on for three days. The farmers had called upon the police in neighboring San Francisco, but to no avail. Law enforcement was unable to intervene, claiming that the farmers had given insufficient proof that the illegal harvesting was still ongoing at the moment of the complaints were filled. 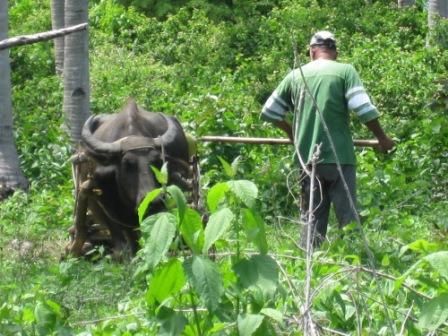 Above: A goon in the act of harvesting coconuts turning his back to me while I am taking a picture

On the third day of seeing the goons reap the benefits of their hard labor, the farmers became exasperated. “We are so angry!” Rolando exclaimed. “We cannot do anything, but we cannot wait either.” With no other options, they returned to the police to once again try to win their support. This time, however, they came with evidence on hand—a text message sent by one of the farmers, explicitness stating that the goons were on her land at that very moment.

Whether it was this message or the presence of foreigners like myself, the farmers convinced the police to come to their land in Nilantagan, hoping to catch the goons by surprise. This was no easy undertaking. Located on a peninsula with the sea on one side and hacienda Matthias on the other, a small boat had to be arranged to get there, and to prevent the landlord from warning the goons about the police’s visit.

It all happened according to plan. The police disembarked, entered the land of the complaining farmer, and caught two goons in the act of illegal harvesting. It was the first time that this had happened—that goons were caught in the act by the police. The farmers were smiling. They knew that with the police as their witness, they would have a very strong case in court. 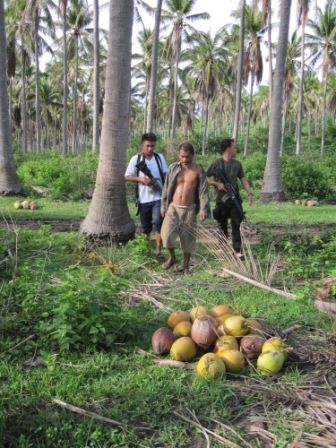 Above: Two Policemen arresting a goon who had been harvesting coconuts

The goons, who had no idea what was happening, were taken to San Francisco by boat. They were interrogated and put in jail together with a mentally ill man who was put behind bars for burning his own house. That night, they slept on the bare and filthy floor between the cockroaches and the rats.

Whatever pity was felt for the goons, it did not overshadow the imminent victory that was on everyone’s mind. Justice, the farmers felt, was now on their side.

The following day, the police drove the farmers to the provincial court to help them file a petition accusing the goons of qualified theft. Yet upon leaving the prosecutor’s office, instead of bringing the much-anticipated good news, the police could only utter two words:

The accused were released, and the farmers went home. Now the goons were the ones celebrating. This incident had only reaffirmed the powerlessness of the farmers in their struggle for land rights, and the unlimited playing field of landlord Matthias. 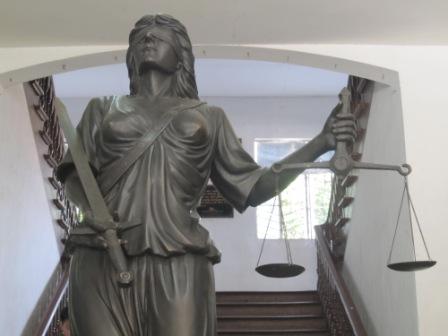 Above: Justitia gracing the entrance hall of the Provincial Court in Lucena

Fortunately for the farmers, the story does not have to end here. Although at first glance, the prosecutor’s decision to dismiss the case appears to be a clear act of partiality, it may be more complicated.

Last year, in an attempt to improve the plight of the farmers, JusticeMaker Jae and other lawyers successfully petitioned Congress to revise the agrarian overhaul program (CARP). Among other amendments, the new CARPER law stated that all cases involving agrarian disputes should be directly referred to the Department of Agrarian Reform (DAR). By doing so, they aimed to protect farmers from criminalization—a strategy employed by the landlord to deter the farmers from petitioning for their land rights. Yet the law is a double-edge sword.  A criminal charge filed by the farmer against the landlord can also be dismissed under this legislation. “This was necessary for the law to be passed.” Jae explains. “When drafting the legislation, we were aware of the possible negative repercussions it could have on the farmers. But since almost all petitions involving land disputes are filed against, and not by the farmers, we were in favor of including this article in the revised agrarian law. Without a doubt, the benefits this law will bring to the farmers far outweigh its negative effects. ”

This makes rational sense. The passage of CARPER was rightly considered a significant victory for the farmers. However, the CARPER legislation has added additional complexity to an already obscure legal area. Because of vaguely defined and contradictory provisions, it has given the prosecutor extra tools to make partial decisions appear to be in accordance with the law. A week after the prosecutor dismissed the farmer’s case, attorneys specialized in agrarian disputes are still debating whether the prosecutor’s decision can be legally justified.  This speaks volumes about the Philippines’ legal system.

Yet not all is lost. For the farmers of Nilantagan, the vagueness of the law also means that there is still a way out of their impasse.  Their case has now been referred to the DAR, which will re-file it at the TRC as a criminal case instead of an agrarian dispute. Since there is no precedent on this issue, all possible outcomes are still open. It is conceivable that the prosecutor admits the case, provided of course that he reconsiders the situation free of prejudice. Then, the new challenge for the farmers will be to successfully navigate the next level of this treacherous labyrinth of justice. 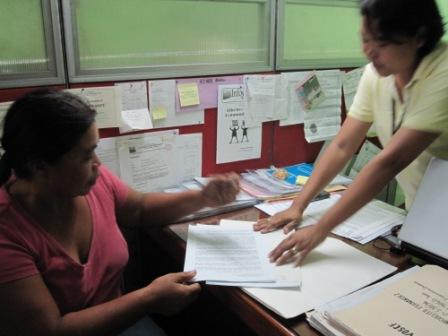 Above: A lawyer at the DAR’s office explaining legal matters to a farmer

In the unlikely event that the prosecutor does accept the case and the farmers end up winning, the question if justice has been carried out, however, remains. In many ways, the goons who were arrested are as much victims of the system as the farmers. They are poor and simple men, unaware that they were taking away someone else’s harvest illegally. Like everyone else, they just tried to make a living and support their families. For justice to be done, landlord Matthias, not the goons, should be the one facing criminal charges.