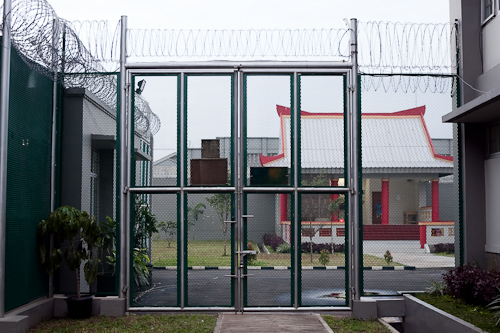 Cipinang Detention Center, Jakarta. Without a word, the detainees of Cipinang detention center enter the large meeting room and take their places seated in rows on the floor. They have come to receive counseling on their legal rights. Much of the early processing of detainees awaiting trial occurs seated on the tiled floor of the center. They sit on the floor to have their heads shaved on entry, and spend most of their time seated on the floors of their cells. In this way, they are subtly distinguished from the staff or visitors, who are given seats. As the detainees sit, however, the lawyers and activists of LBH Masyarakat vacate their seats when the prisoners enter and join the detainees on the floor. All eyes are on Ajeng Larasati, an LBH Masarakat Assistant director and Justice Makers fellow, as she begins her lecture.

Once a month, LBH Masyarakat provides counseling to new detainees at Cipinang to inform them of their legal rights. Throughout the arrest and investigation process, detainees may be asked to pay bribes or will be discouraged from obtaining a lawyer, fearing that it will only waste time and money. LBH Masyarakat’s counseling focuses on dispelling these illusions. Likewise, detainees often don’t understand that the only statement the judges will consider are the ones made in court, allowing them to set the record straight if they were coerced into a false confession during the investigation. 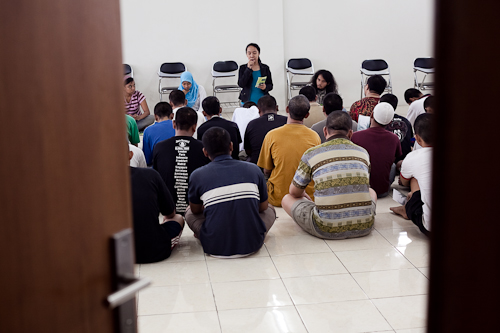 After the initial training, LBH Masyarakat members make themselves available for one-on-one counseling with the detainees. At this point, more than half of the group leaves. Larasati explained, “For some of them, it’s because they already have a lawyer. But a lot of them have just decided to give up and go with whatever the prosecutor says.” Those the remain, though, take the opportunity to speak with a legal expert very seriously. For the first time during my stay in Indonesia, nobody pays any attention to the presence of foreigners; each small group of detainees is focused on the counselors.

From the perspective of the LBH Masyarakat staff, the information is nothing new. Most detainees ask the same questions or have the same problems. “Often, they don’t understand what they are charged with,” Larasati said. It is often the first time they’ve heard about the court process. “Most Indonesians don’t understand the law,” said Larasati, “Even with the rich and well educated, there’s no guarantee that they’ll know their rights. The common people don’t believe in the law anymore.” This view was echoed by a detainee who claimed the law didn’t matter as long as you’re able to pay bribes. 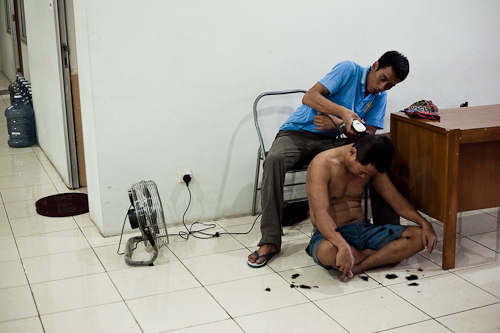 The pervasiveness of this belief, and the poor understanding of the law, has reflected poorly on lawyers. “People associate lawyers with organized crime,” explained Larasti. She said the public speaks about the law as if it were a kind of magic, and of a conflict between “Black lawyers” who take bribes and “White lawyers” who do not. “That’s why we never give or take bribes,” Larasati added.

Even with that reputation, these detainees trust Larasati and the other counselors enough to seek detailed advice. One detainee I interviewed, who asked not to be named, brings in his charge slip to have Larasati explain its meaning. Larasati, with her bible-like book of criminal statutes opened on the floor, patiently explains the charges against him. Talking to him afterward, the detainee said he “felt calmed” by his new knowledge, but was “still nervous and confused” because he had no way of knowing how long he would be held before his trial. Larasati told me that, if he wants, LBH Masyarakat may go on to represent him in court.

Though the knowledge and explanation Larasati provides certainly has an effect in itself, it’s real power is in application in court. “There is one case I remember, a man was charged with possession [of illegal drugs]. He was also HIV positive.” In Indonesia, non-violent drug addicts are entitled to serve their sentence in a rehabilitation facility if they can prove that they are seriously chemically addicts. Because of information campaigns by groups like LBH Masyarakat, “Most of the drug addictsknow they have the right to go to rehab,” Larasati said, “but they don’t know how to claim it.” Two weeks after counseling, the defendant’s family came to Larasati and asked for her help to get him into rehabilitation. Ultimately, Larasati able to get him into a year-long rehabilitation program, instead of a 20-year prison sentence. Out of more than 20,000 convicted drug users in Jakarta, only nine last year were assigned to a drug rehabilitation clinic. Two of those were LBH Masyarakat clients 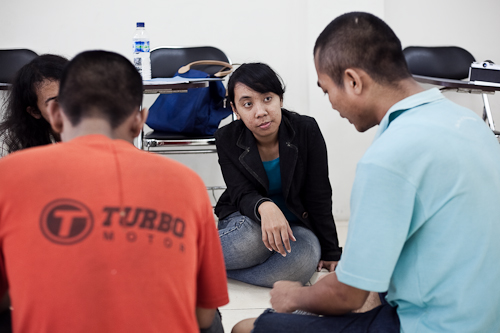 It is these kinds of success stories that Larasati hopes to make more common by formally training Tamping, convicted prisoners who are serving out their sentences by working in the detention center. Though they are currently relegated to clerical duties or basic detainee management, Larasati believes that, if trained, they could make information about legal rights ubiquitous among detainees, and provide counseling more often than LBH Masyarakat’s monthly visits. Also, because they are ‘insiders’ who were once detainees themselves, the tamping may be able to reach detainees who don’t have enough faith in the law to reach out to lawyers.

Right now, the tamping’s only involvement is as time keeper for the counseling session. And time is up. The detainees, in small groups around LBH Masyarakat staff, thank their counselors and line up to return to their cells. LBH Masyarakat will return next month to meet a new group of incoming detainees. But the walls of the detention center to not constrain the movement of knowledge. Before lining up, some of the detainees ask Larasati for more pamphlets, to teach those that didn’t attend about how to claim their rights. In the face of a legal system that demands bribes, uses force and tells the detainees to not seek legal assistance, these, at least, have not given up. 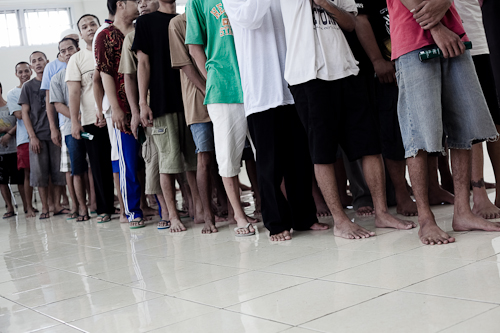