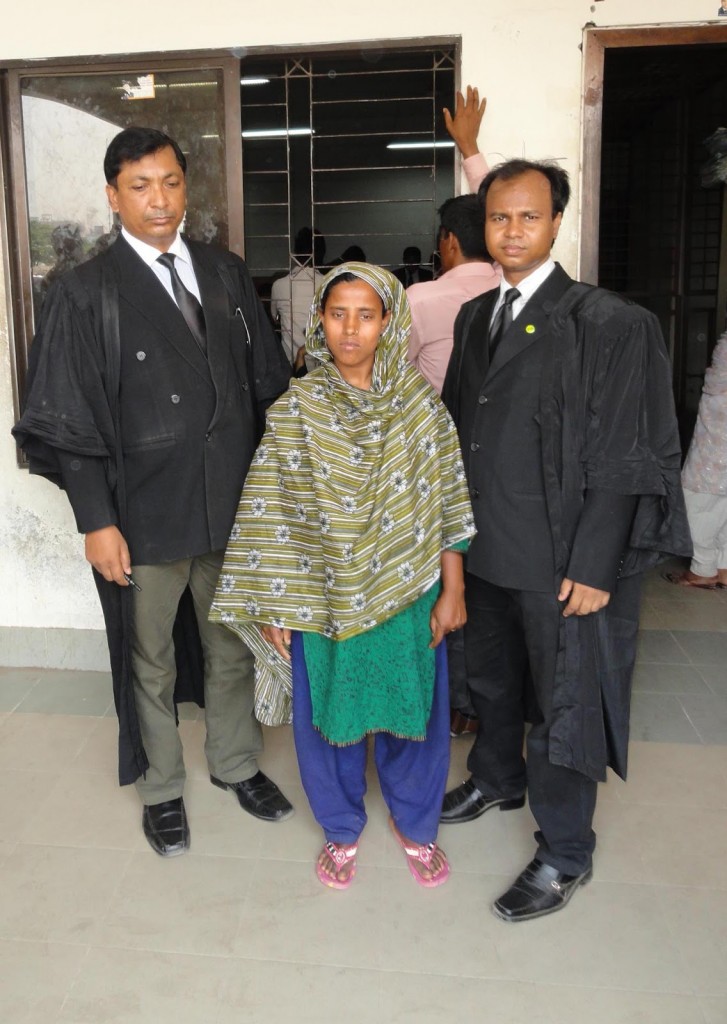 Mrs. Kolpone, a 36 year-old woman and mother of a ten year-old girl, was arrested in July 2009 by the Paltan police station in Bangladesh, alleging that she had stolen two gold bangles along with some  money. Although the police were not able to recover any of the stolen goods, she was put into custody. Two and a half years passed and she was still in jail without a trial, as she was unable to appoint a lawyer.

In Feburary 2011, attorney Shahanur Islam, 2010 JusticeMakers Fellow from Bangladesh, took up Mrs. Kolpona’s defense and conducted an interview with her at the Dhaka prison center. One year later in April 2012, Shananur Islam and attorney Mohammad Alamgir, from JusticeMakers Bangladesh, appeared in the Metropolitan Magistrate Court of Dhaka and got her released from custody.

This is only one of the many cases that our 2010 JusticeMaker Fellow solved by providing direct support to the victims of human rights violations and injustices. Furthermore, by conducting a fact-finding investigation, he found out facts which helped to lobby the authorities by issuing urgent appeal, which was helpful in receiving justice.

During his project execution, he also ran training sessions to reduce torture and promote respect for human rights. Professionals from a variety of sectors attended these sessions: lawyers, police officers and prison officials, journalists, judicial officials and human rights activists. These people then joined the unofficial network of people around the world battling against torture and other human rights violation.

It wasn’t easy for Shananur Islam to implement his project. He faced a lot of challenges while doing his job: “I have received repeated threats, death threats, intimidation, arbitrary arrest, detention, ill treatment, physical assault and harassment by the law and security personnel and also from local pressure groups due to my activity and voice against torture,” claims our JusticeMakers Fellow.

The project period has since passed, and all the proposed activities have been completed in a timely fashion. “I think my participation was interactive and the victims who received direct support are pleased and grateful about our [IBJ’s] support”, says Islam.

However, as a human rights defender, 2010 JusticeMakers Fellow Shahanur Islam is continuing his activities upholding human rights in Bangladesh. He is still working for the victims of torture and extrajudicial killing as well as victims of injustice who may be in prison due to financial inability, and people living in vulnerable conditions. The professionals trained during his JusticeMakers project are  assets to him, supporting him continuously by providing information and assisting additional people.

“The project is good enough, but for better results, we need to continue it in the long-term. We need to make a strong network in every district and build a core group of volunteers to help us conduct the training lessons, fact find, issue urgent appeals, and other activities”.

15 October, 2012 at 8:59 am International Bridges to Justice 2010 JusticeMakers, English, JusticeMakers Share via: