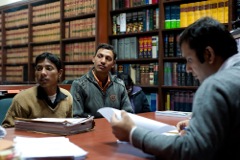 "Aditya" (left), who was accused of robbery and murder along with three other men, discusses his case with IBJ staff and family. He originally received a 30-year imprisonment sentence, which IBJ lawyer Ajay Verma was able to overturn after highlighting flaws in the prosecution's case.

In India, one of the most basic Common Law principles is “better that ten guilty escape than that one innocent suffer.” While the Indian criminal justice system is based along these lines, trial courts have not only grossly erred time and again, but sometimes err in following even the most basic and fundamental principles of Criminal Law. For Aditya, Chandra, Halim, and Kavi, this was the case.*

According to the prosecution’s case, the four aforementioned accused had allegedly hatched a criminal conspiracy to commit robbery and in the process allegedly killed a person, taking various objects such as a gold ring, gold chain and a wrist watch. The Trial Court convicted the four accused, giving them to life sentence with a rider of a minimum of 30-years of actual imprisonment with no possibility of remission.

According to the basic tenet of criminal law, the prosecution needs to establish their case beyond a reasonable doubt to secure a conviction. Yet there were no eyewitnesses present during the crime, nor any direct evidence that could implicate the four accused. Instead, the Trial Court reached its decision based on one alleged extra-judicial confession, the recovery of stolen objects from the accused, and the recovery of one mobile phone and its call records.

The court also relied upon the recovery of incriminating evidence from the accused as another valuable piece of evidence—but the deceased’s family did not report the theft of these objects for more than a month after the commission of the crime. The prosecution never bothered questioning this lapse of time between the crime and the report of the theft.

The basic principles of Fair Trial are the right to be presumed innocent and the right to be tried without undue delay, both of which were disregarded in this instance. Aditya spent about in total 6 years in prison, first as an undertrial and subsequently as a convict. But his family hurt from his imprisonment too. He was the sole bread winner for his aged parents, wife and school-going daughter. Though his income was meager, it still provided sustenance to his entire family, which was lost once he was incarcerated.

When the case came up before the Honorable High Court of Delhi in Appeal, IBJ India Fellow Mr. Ajay Verma, Advocate, mentioned these flaws in the prosecution’s case and the trial court’s decision. The High Court looked into this evidence, concluding that there were not only lapses in the investigation but the evidence was not strong enough to confirm the guilt of the accused beyond the shadow of reasonable doubt. Thus, all the four accused were acquitted of all charges and ordered to be set free.

This case is a glaring example of the shortcomings that plague the Judiciary (the lower judiciary in particular,) clearly showing how the Trial Court failed to appreciate the evidence in proper light and held four innocent persons guilty on the basis of weak evidence.

*Names have been changed