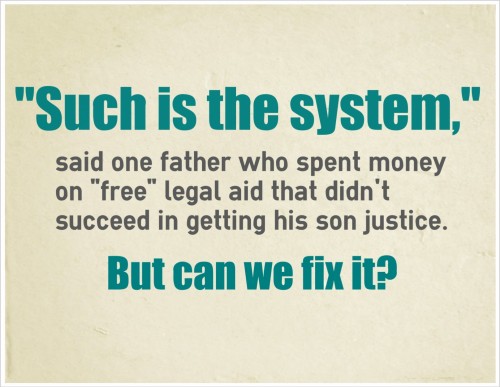 Prithu* is a 50-year-old street hawker who earns his living by selling eggs in a quiet neighborhood of north Delhi. He says he spent nearly all of his savings trying to get his 28-year-old son, Pran*, out of prison.

Prithu came to Delhi in 1985 with his wife and four children. He left Dasai, a small farming village in northern Bihar, in search of greener pastures and a better living.  He found work in a bicycle repair shop and settled down for a one-room shack in a slum, in sharp contrast to the small, concrete house he owned in the village. Prithu believed that this was a small price to pay for the good life he had imagined his family would have in the future.

For years Prithu worked at the repair shop, raising his son Pran and 9 other children before buying a wooden cart to sell eggs – a seemingly more profitable enterprise for an otherwise unskilled, illiterate man. Prithu made around $ 400 a month, which could barely support his growing family. Pran was unable to study beyond 4th grade because his father could not afford to send all 10 children to school. So Pran dropped out of school and learned to drive, thinking he could support his family and send his younger siblings to school. Until last year, Pran was driving a hired auto-rickshaw like most auto drivers in Delhi, earning a meager sum of 500-700 rupees ($10-15) a day. But the finances of the family were thrown off balance when they learned of Pran’s detention.

Pran was arrested in February 2011 for allegedly abetting an abduction of a 17-year-old girl. On the day of the incident, two men allegedly approached Pran’s auto-rickshaw accompanying a girl and asked him to drive them to a certain location. He didn’t know the passengers and certainly did not know that the men were abducting the girl. They must have driven only a few kilometers down the road when the auto-rickshaw was intercepted by a police van. A case was made and the men were arrested, along with Pran.

Pran claimed and begged the police to set him free because he didn’t know the men were abductors, but his pleas fell on deaf ears.  Even at the time of his arrest, he told the police that he was only doing his job and had no role in the abduction, but the police did not pay any attention to his cries. He was taken into police custody and produced in court soon after. Even in court, he stated that he was only a driver and had no idea that he was, legally speaking, “abetting an abduction.’’ Yet he was unheard and remanded to judicial custody.

Days and months went by. Pran was forced to resign to a life of hopelessness and shame. He was beaten up by other jail inmates for favours and money as little as 200 rupees ($5), but he did not complain to the prison authorities. He had lost faith in the system and didn’t think there was anyone who could help him.

Prithu, Pran’s father, claims that he did not know of Pran’s arrest and reported him missing when they could not find him anywhere. The police made no attempt to inform Pran’s family of his arrest, and Pran himself was perhaps ashamed and scared to inform his father of his imprisonment. Two months later, Prithu finally learned of his son’s imprisonment.

Prithu did not have the money to visit Pran right away, but he began to apportion some money from his savings to pay to the Legal Aid lawyer who had been assigned to Pran’s case by the Legal Services Authority. Though state-sponsored legal aid lawyers are supposed to provide free legal assistance to their clients, nothing was done unless some amount of money was given to that Lawyer to initiate the paperwork as he demanded money to initiate the process.

Prithu met Pran in prison after nearly six months of his imprisonment. Pran informed his father that three to four lawyers had been assigned to the case, but no one had done anything to seek relief for him. Pran learned about legal aid from his fellow inmates and realized that if he had a competent and sincere lawyer, he could get bail. Both Prithu and Pran knew that it would be months before they would get any justice.

“Such is the system,” sighed Prithu, adding that he spent nearly 10,000 rupees ($210) to pay the lawyers who promised they would get Pran out of jail. “But nothing happened and all the money went down the drain.”

Prithu recalls that his family went through countless days of hardship and hunger trying to make ends meet and save money for Pran’s bail amount.  Prithu did not earn enough to feed 13 people, including Pran’s wife and two young children; therefore, he sent them back to the village.  Prithu worked extra hours, doing odd jobs in addition to selling eggs only so that he could save some money for his son’s release.

In January 2012 IBJ Duty lawyer Suchiti Chandra met Pran in prison and discussed the details of the case with him. She realized that the case clearly merited Pran’s release on bail. Prithu says Ms. Chandra argued for nearly four hours in court highlighting the points in favour of Pran’s innocence, and ultimately managed to secure his release on bail. After 11 unnecessary months of imprisonment, Pran was finally released from prison with his father as the guarantor of his bail.

Today, Pran’s father is back to selling eggs and knows that someday everyone in his family will have a happy and secure life. Prithu says IBJ has done what no other lawyer or his entire life’s savings could do – get freedom for his son. Pran himself is back with his wife and children in the village he left behind. He is working as a mechanic at a cycle repair shop earning 4500 rupees a month ($94)—not plenty, but somewhat enough to sustain his family at the moment. He plans on going back to farming so that he can earn some extra money and send his children to school. Pran says that his dream of seeing his children grow would not have been possible without IBJ’s help.

*Names have been changed