The court of Cibitoke is located in the North-West of Burundi, about 50 kilometers from the capital city Bujumbura. No prison is located in Cibitoke, so prisoners from this area are detained in the Central Prison of Mpimba located in Bujumbura. To hear criminal matters, this court has to make “itinerants,” where judges and prosecutors from Cibitoke court move to Bujumbura. They then hold hearings in the courtroom of one of Bujumbura tribunals. The provisional relocations are supported by the Belgian Technical Cooperation (BTC), which financially supports the transportation needed to allow the court to leave Cibitoke and come to Bujumbura.

On March 27th, 2013, the court in the Rohero Tribunal conducted a hearing. From 9 o’clock, twenty defendants awaited the arrival of the judges while IBJ lawyers interviewed them. Among the issues scheduled, there was a case of four defendants that captured the human rights defenders’ attention. These defendants had been arrested on January 21, 2011.

As of March 16, 2011, the judge granted them provisional release. The prosecution objected to this decision and appealed. The Court of Appeal of Bujumbura maintained the first decision, which was notified to the defendants on November 13, 2012. Burundi’s law provides that in case of pre-trial detention, the appeal must be dealt with in 72 hours. In the defendants’ case, the appeal procedure lasted for almost twenty months, time during which the defendants were held in detention throughout the procedure. A worrying fact was that those defendants remained in prison despite the second decision.

At the call of the case, Janvier Ncamatwi, an IBJ lawyer, denounced all the irregularities related to illegal detention of his clients. Among others, he let the seat note that his clients were supposed to walk free according to decision taken by the court. He went on by inviting judges to analyze whether his clients were irregularly maintained in detention. He was vouching for release of his clients. According to him, the seat had to decide on the benches and order their provisional release. The prosecution unsuccessfully tried to oppose the IBJ lawyer’s arguments. The seat left the room to deliberate. After ten minutes, the session was reopened and the President of the seat confirmed that the four defendants were to walk free.

This joyful decision caused tears to pour down the defendants’ faces.

The seat had then to deal with the substance of the case. IBJ lawyer requested the implementation of the first decision to allow defendants to consult their records in order to prepare their defense. The case was thus reported in 29 April 2013.

On that day, of the 10 defendants whose cases have been assisted by IBJ lawyers, four have been granted provisional release, five have seen their cases closed and taken for deliberation and another case was handed over on April 29, 2013.

International Bridges to Justice was pleased to see that the Office of the High Commissioner for Human Rights and the Office of the United Nations in Burundi in the section of Human Rights and Justice, who were present during the audiences, decided to follow up with that case until the decision of the court was effectively implemented. On the following day, the four accused defended by IBJ were released after 740 days of detention with a provisional release granted.

IBJ lawyers and volunteers Astère Muyango, Aline Nijimbere, Janvier Ncamatwi, Modeste Niyonsaba and Audace Gatavu assisted more than thirty five defendants from the provinces of Cibitoke and Mwaro on 29th and 30th of April in 29 cases. The inmates from Mwaro were assisted in the province of Muramvya, which is the location of the prison in which they are detained. Most of the cases have been closed and submitted for deliberation.
IBJ continues to support the accused in Burundi. As the IBJ Founder and CEO, Karen Tse wrote in From Fear to Hope, citing Martin Luther King, “the time is always ripe for justice”. Justice does not “roll in on the wheels of inevitability” but comes about because of dedication and hard work of committed individuals. 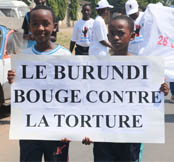