3,800 died immediately. Tens of thousands more to die in years to come. Birth defects and health issues to exist for generations. This was the result of a gas leak from a factory owned by Union Carbide, an American corporation in Bhopal, India on December 2, 1984 which came to be known as The Bhopal Disaster. The damage was massive and the accountability? almost nonexistent. The Bhopal Disaster is one tragic example of the widespread harm, unmonitored and cavalier American corporations, can cause abroad.

They Saw This Coming

Even before the Bhopal Disaster there were signs that the chemicals being used by Union Carbide were harmful to residents living by the factory. Champa Devi, who lived in the area, used to go behind the factory to a pond to wash clothes. She says, “we soon began to notice that our hands would burn every time we washed clothes and small boils would appear on them” and a year before the Bhopal  Disaster, gas leaked from the factory and killed one factory worker. Devi  says, “money was paid to his family and the matter was hushed up. But we began to notice that the night air was always heavy with the smell of gas. We used to experience an odd feeling in our throats whenever we breathed that air.”

The number of factors that went into the gas leak is astonishing. For starters, the factory should have never been operating in the area it was in to begin with. Since that section of Bhopal was a populated, urban area, “the specific site within the city was zoned for light industrial and commercial use, not for hazardous activity.” and initially Union Carbide was only approved to work with chemicals in small quantities. However, the factory soon started to deal with more complicated and hazardous chemical processes at exacerbating levels in order to “keep up with the competition”. The safety equipment and procedures at the facility in Bhopal were run at ‘standards” far lower than their American counterpart in West Virginia. Both the government and the corporation knew of, but ignored, these safety issues because they feared the loss of capital from a big employer (Union Carbide) during a struggling market. In other words, they put profit before people.

The result? On December 2, 1984 40 tons methyl isocyanate gas leaked from a pesticide plant in the factory creating the worst industrial “accident” in history.

on the night of the gas leak, Rashida Bi and her family, who lived in Bhopal – left their house and began running as they heard shouts from outside saying “run, otherwise you will perish.” As they tried to escape the gas, Rashida says, “my eyes were shut tight. I could not open them because of the pain. Whenever I did manage to squeeze them open, all I saw were piles of corpses scattered around. People were blindly running around those piles.”

Champa Devi says “everything was running, the only thought in their minds being to get as far away from the place as possible and save their own lives. There seemed to be no alternative. Because the dance of death had already begun.” Soon after surviving, Champa Devi with a group of women walked 800 kms to Delhi to demand justice at the capitol. They walked for 30 days.

3,800 people died immediately – but unfortunately, that was just the beginning. Hundreds of thousands of people will be injured and suffer severe health issues over many generations to this day. The damage will be exacerbated by how the corporation and the government handles the disaster.

After The Gas Leak, Another Disaster

How Union Carbide handles the disaster afterwards will end up being just as damaging as the disaster itself. In an attempt to save themselves from responsibility, the corporation went through a long pattern of doing exactly what not to do: from downplaying the affects of the gas and saying the pain can go away with water to victim-blaming and saying it was the workers fault. The toxic gas leak has yet to be cleaned up, causing widespread contamination for the people, and animals, who live in the area. But the most damaging, is that Union Carbide held and distorted scientific information about the health effects of the gas — resulting in mistreatment and misdiagnosis of the survivors for years. Mr. Satinath Sarangi from Sambhavana Trust explained, “It is true that the government spent a lot of money providing free health care to the survivors…but what we found is in the first 10 years, because Union Carbide was still withholding information on the effects of these chemicals from the gas leak, the doctors did not know how to treat it. These (medicines they gave out) often caused more harm than good. We found that, despite 10 years of treatment, not a single person had any sustained relief.”They survivors of the disaster will barely see any of the rights promised to them by their government. In July of last month, 29 years after the Disaster, a district court in Bhopal finally issued summons to Dow Chemical (the owner of Urban Carbide) for the criminal case. The summons was first issued in 2005 but was halted by the high Court until October 2012.

The only justice the people of Bhopal and India saw, was on account of themselves, as they took matters into their own hands – demanding accountability, justice, and the right to live. Indian lawyers, like Satinath Sarangi from Sambhavana Trust, have been organizing, campaigning, and working to try and gain justice for the survivors since 1984. Today, they are still fighting for labor and health rights for the survivors, to have the corporation do time for their crimes, for Dow Chemical (the owner of Union Carbide)to stop using harmful chemicals in Bhopal. Champa Devi and Rashida Bi went on to start the Chingara Trust, a non-political, not-for-profit organization for the survivors of the disaster. The Trust provides care for the children of the disasters – many of whom were born with birth defects and health issues. They also conduct medical research and provide education. 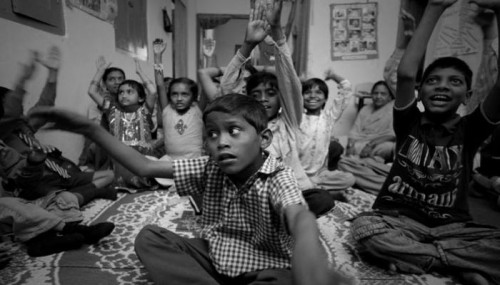 Children at the Chingari Trust

29 years later, it’s 2013, and the work is far from over. Dow Chemical, the owner of Union Carbide, is still operating in Bhopal. And 29 years after the disaster, they are still using harmful chemicals. This time around it’s dursban: a chemical that causes birth defects that Dow Chemical still produces and sells to Indian households. A chemical that caused hundreds of health incidents that Dow attempted to cover up. Dursban, banned from America, is the reason the American corporation is operating and selling in India. Dow Chemical was caught paying bribes to Indian officials to cover up the safety issues with the chemical. The lawsuits for Dow Chemical will continue as they continue to commit crimes; however, they will continue to pay bribes in order to not see any repercussions.

But one thing is for sure: the survivors of the disaster, the lawyers and activists, the people of Bhopal will not back down.

Information for this blog post was accumulated in interviews with Ms. Champi Devi from Chingara Trust and Mr. Satinath Sarangi from Sambhavana Trust.

online articles: The Bhopal Disaster and its Aftermath: A Review http://www.ncbi.nlm.nih.gov/pmc/articles/PMC1142333/