In 2010, a thief came into Mr. P’s house to rob him of 6,500,000 riels (about 1,625 USD) and beat him. The victim immediately went to the police post to file a complaint, informing them that he suspected two persons: Veasna (name changed) and his son.

But Veasna, a 49 year-old farmer and father of seven children living in a deeply remote area, was in a pagoda at the time of the robbery. The police went to his house to investigate the robbery and found a gun. Veasna was absent at the time of the search and the police immediately concluded that he was guilty. They transferred the case to the Court where the prosecutor submitted it to the investigative judge. As the police could not find Veasna or his son in his house, the investigative judge issued an arrest warrant. The case had been tried in abstentia and the defendants were represented by a lawyer from Avocats Sans Frontières (ASF). The trial judge issued an arrest warrant for both Veasna and his son, charged them with robbery, and sentenced them to 6 years in prison.

On 15 August 2012, Veasna was arrested in his house and incarcerated. The police informed him neither of the warrant nor about his rights. Fortunately, the judge informed him about his sentence and explained that he had the right to file a complaint against the judgment as it was made in abstentia, which he did. As his ASF lawyer was not able to represent him, the judge assigned the case to Mr. So Bengtharun, the IBJ provincial lawyer in Prey Veng, on January 8, 2013, less than 20 days before the trial. 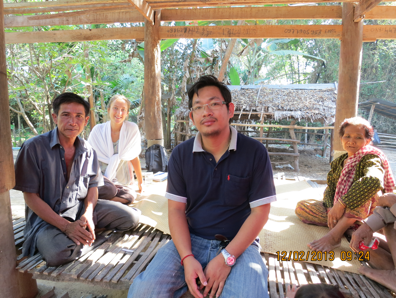 The trial took place on 23 January 2013 in the Svay Rieng Court. Veasna explained that the day before the robbery he was in a pagoda for a ceremony, and that he had stayed overnight. He heard that the police were conducting a search in his house. He was scared and decided to stay in the pagoda until the police left. He reported that he still does not know how the gun got in his house because he had never owned any firearms, but that he suspected his son, who never reappeared after the event.

IBJ lawyer asked to adjourn the trial for a recess in order to prepare and call witnesses from the pagoda ceremony as well as the police chief, and the judge agreed. The IBJ lawyer worked very hard on the case and finally found enough evidence to move forward.

On the final day of trial, February 5, 2013, all the defense witnesses confirmed that Veasna was in the pagoda during the robbery. The police chief testified that he had not received any arrest warrant for Veasna before the one issued by the trial judge

The judge finally decided to acquit Veasna, who, was finally released on February 7, 2013.

Before this interaction with the criminal justice system, Veasna had never heard about IBJ. Now that he knows about it, he believes that it is a great organization which could effectively help many more poor people like him. He will spread this information in his village and beyond. After almost six months in prison, he feels very happy to be back home with his family, and is very grateful to IBJ.

Without the help of IBJ’s lawyer, Veasna’s judgment would probably have been confirmed as no further investigation would have ever been conducted. This shows how essential it is to conduct a proper investigation, including interviews of witnesses and cross-examination in court. Indeed, even though it is easier to believe something that is visible or tangible, appearances can often be deceiving.