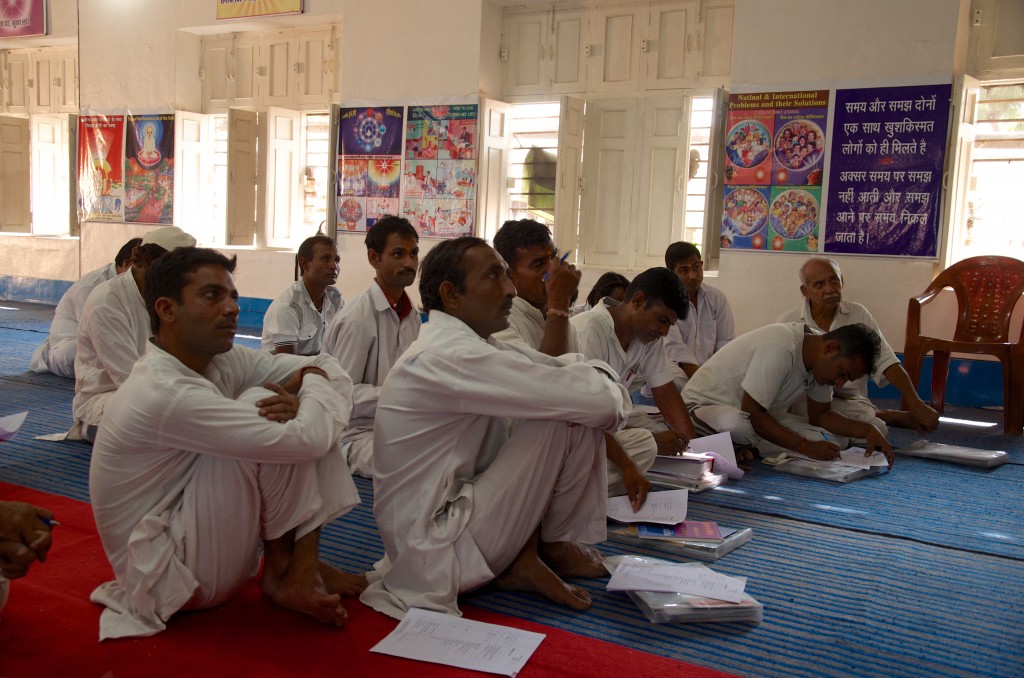 Some of the longterm convicts that participated in the workshop.

From the 04th to the 06th of October, IBJ India jointly conducted a three-day para-legal training in Jodhpur, Rajasthan. The training was conducted in collaboration with CHRI (Commonwealth Human Rights Initiative), State Legal Service Authority (Rajasthan), and District Legal Service Authority (Jodhpur).The overall goal of this workshop was to train longterm convicts in basic legal issues and procedures, especially relating to pre-trial detention and speedy trial. When trained properly, longterm convicts become in-house legal resources, and they are therefore potential significant resources in jail administration. Their knowledge as para-legals enables them to spread legal awareness and to assist undertrial and freshcomer prisoners in their jail. 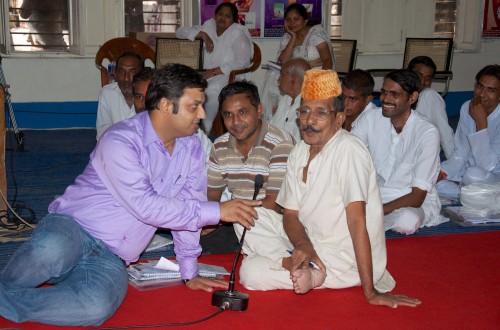 Mr. Ajay Verma talks to one of the convict.

The workshop was titled Saksham Legal Capacity Building Workshop, a name capturing the essence of its goal in the word “Saksham”, translated to “capable” in English. We gathered about 20 literate longterm convicts in the hall of the prison complex in Jodhpur Central Jail. The prisoners participated actively in the sessions and many of them showed a big potential to be future para-legals in the jail. “A 72 years old man serving a lifetime sentence, came up to me and said that this training was the definite highlight of his 22 years of imprisonment. This is my definite most memorable moment of the workshop”, Said Mr. Ajay Verma, Advocate & Fellow IBJ India.

Friday the 04th of October was the first day of the workshop and was kicked off with an interactive session, in which the convicts’ knowledge about issues like prisoners’ rights and the right to an effective and speedy trial was mapped. As our previous experience from these kinds of events shows, the inmates usually do not have basic knowledge on these issues. The Superintendent of the Jail, Shri Rakesh Moham, talked about the role of para-legals and prison officers in prison management and reform. Mr. Ajay Verma then talked about IBJ’s work with prisons. The movie “Bol Bosanto” was screened, and followed up with a discussion on the movie’s topic, namely: What is law? 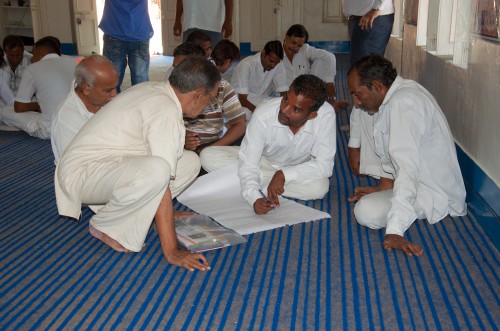 Excercise on client-lawyer relationship made the convicts have fun.

Day one continued with an interactive session, conducted by Mr. Verma (IBJ India) and Mr. Raja Bagga (CHRI). They explained the rights available during trial, and made the convicts share their own experiences. Certain images of court-,policestation-, and jailscenes were shown, and the inmates were asked to explain what they were seeing and to share their own stories with the group. Further, Mr. Verma led a session on the importance of a good client-lawyer relationship. This was done by roleplay exercises, for example, half of the convicts were acting clients and the other half were acting lawyers. They used their own experiences to argue their cases. This activity was conducted to find out what the convicts have gone through and what problems they have faced with their lawyers, problems it is less likely that they would have shared face to face with them. Many convicts do not even talk with their lawyers, which often just take their papers without interacting any further with their client. The activity also made the convicts laugh and have some fun in a, at times, heated discussion between the clients and the lawyers. 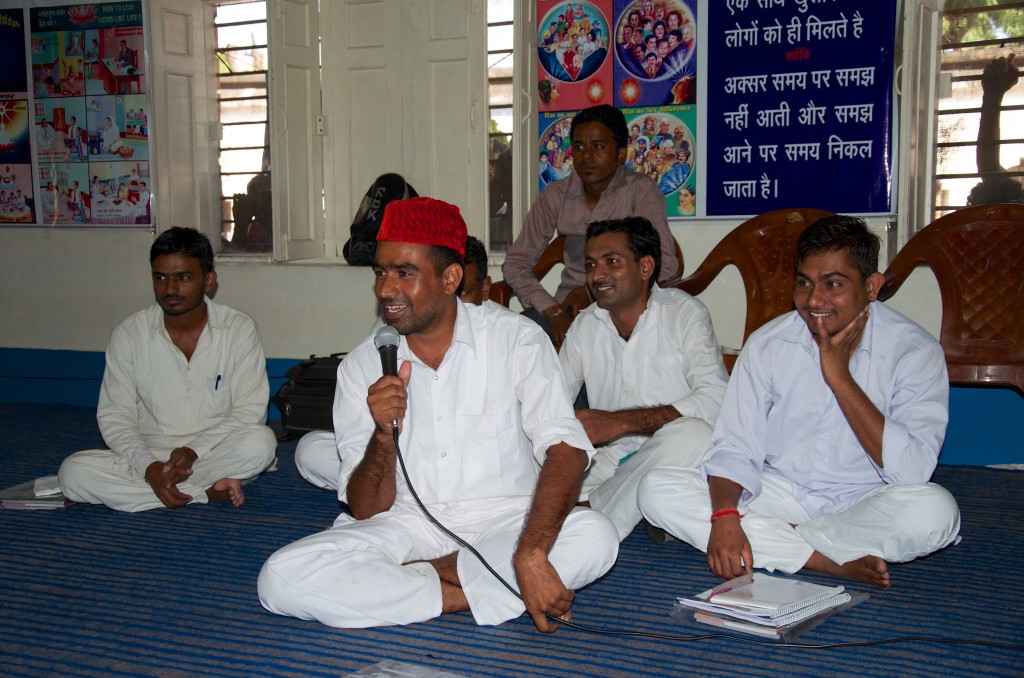 Excercise on client-lawyer relationship made the convicts have fun.

The next session on Avadhik Samiksha Samiti was chaired by Shri Mukish, Chief Metropolitan Magistrate. Mr. Rakesh Mohan, Superintendent, Jodhpur Prison was also present as co panelist as both persons are ex-officio representatives of the Periodic Review Committee (PRC). The Committee was created in 1979 with the mandate to ensure that the undertrials’ right to freedom is properly ensured. The Committee is supposed to frequently review the situation of every prisoner awaiting trial. It is thought that giving the para-legals information about the PRC will help them understand their larger role in the delivery of justice for other prisoners and explain to them how they in their role as para-legals can assist in strengthening the Committee.

Written excercises were a significant part of the workshop

The second day was kicked off with an open session, where the convicts came forward and requested Mr. Verma from IBJ India to listen to and take up their cases. The morning session  focused on bail, plea-bargaining, appeal and parole. Exercises were done to equip the para-legals in drafting bail applications, plea bargaining applications, parole and appeals. The convicts were given casestories, and asked to draft bail applications, which were reviewed in plural. Other topics covered on the second day were eligibity, referral authorities and the following-up process.

On the third and last day of the paralegal training, the movie “Pehel” was screened followed by a discussion. The aim was to visualize the structures that would be needed for effective functioning of paralegal work in Jodhpur Central Jail. Also, some time was devoted to talking about bailable offences, under sections 107 and 151 in the Indian Criminal Procedure Code (Cr. P.C.). Under Section 436 states that if a pe

rson is not able to furnish bail for a period of one week, and he does not have a surety, according to the section he is supposed to be released on furnishing a personal bond. The objective of the workshop was to train longterm convicts in a way so that their potential resources in jail administration are enabled. The workshop focused on the difficulties faced by those held in pre-trial detention and stressed how longterm convicts can assist them, while at the same time it helped the convicts to gain insight into their own legal rights. We have a very good relationship with the prison authorities in Jodhpur Central Jail and they also requested us to come back for similar events soon. Because of all these things, IBJ India considers the training as very satisfying and is happy to have been a part of it. 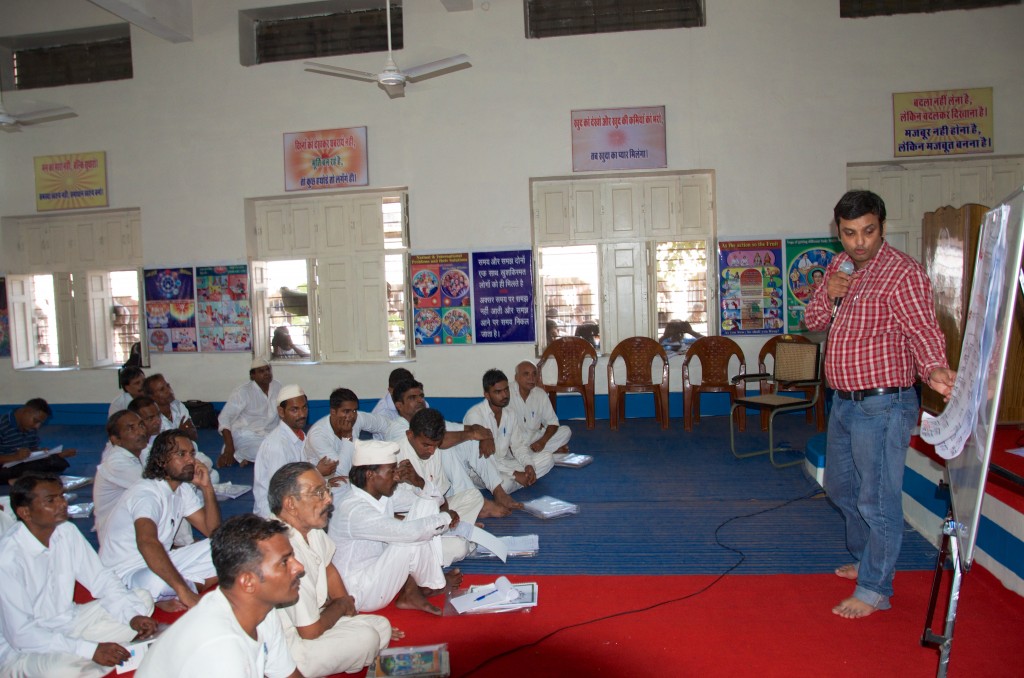