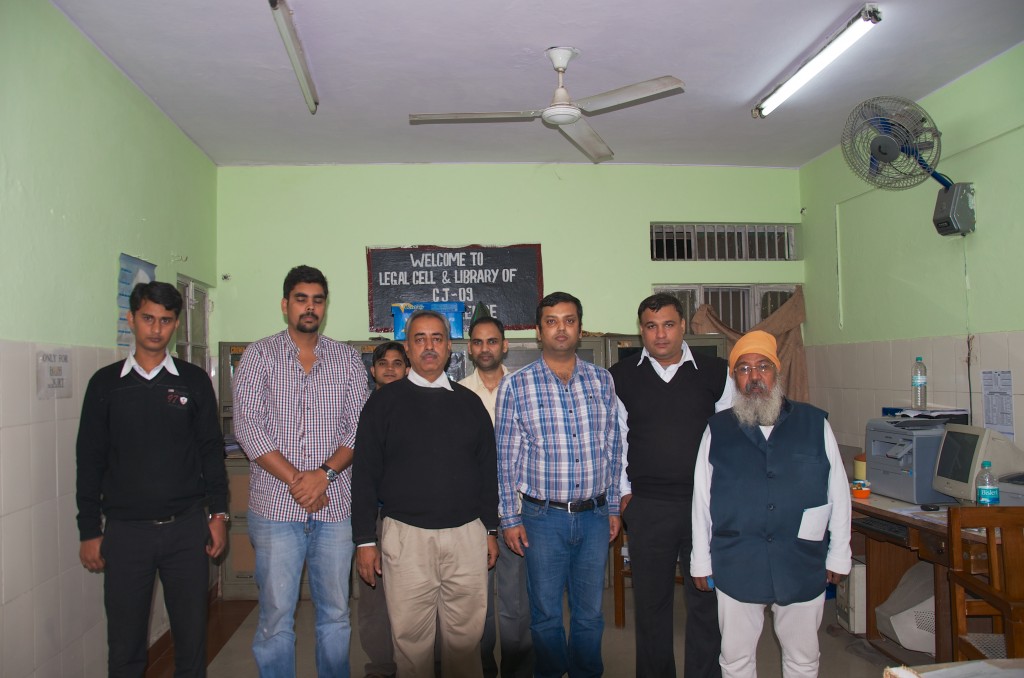 The awareness workshop was held in the New-Comers Ward of Tihar Jail no. 8 and 9, and followed by an interactive session where Mr. Verma and the lawyers answered questions and shared basic legal knowledge with the prisoners. The New-Comers Ward was chosen because most of the time new inmates don’t know anything about legal aid and procedures. 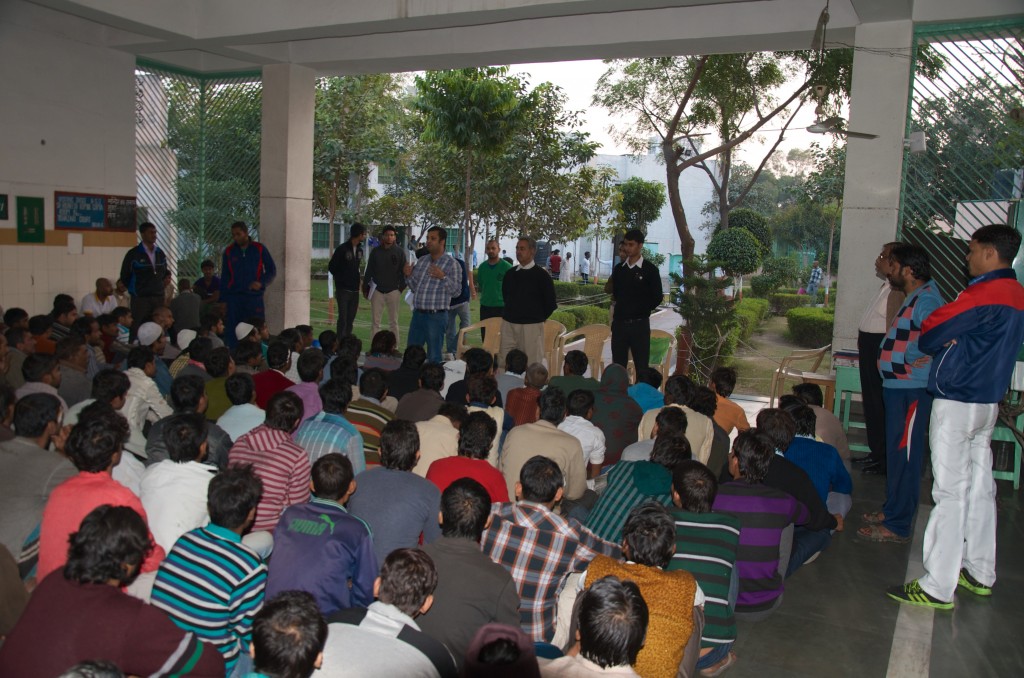 More than 300 new-comers had gathered to attend the awareness workshop.

Communication with the judge was one of the first issues to be discussed. Many inmates told us that when they are produced before a magistrate, they will stand in the back of the room and not be allowed to talk to or address the presiding judge. The inmates are frustrated because they want to share their versions and details of the crime, or maybe they want to put before the judge that they have been falsely implicated.

Mr. Ajay Verma told the inmates that they have to talk to the judge and say whatever they want about their case. If the accused talks, the judge will listen to him. He adviced the inmates to go to the legal aid centre in their jail and write what they want to tell the judge in a paper, which they will give to the judge in court. Besides this it was also suggested that as the courts are considered temples of justice, the inmates needs to be polite and courtious to the sitting judge. 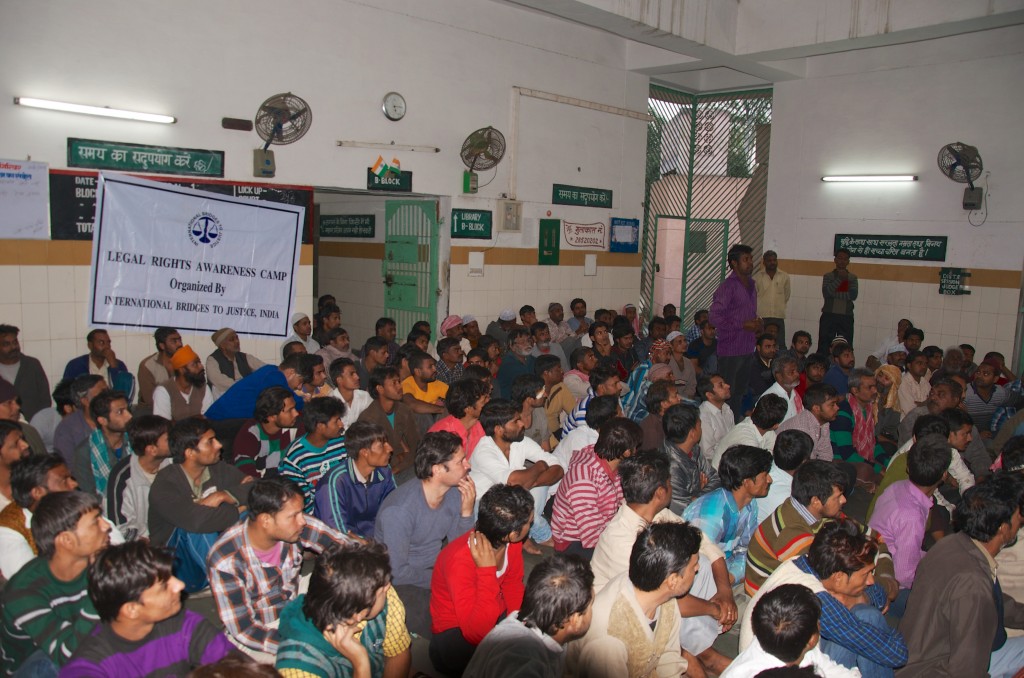 Some time was spent on informing the inmates about the necessity to give any defence evidence they have in their case. The inmates felt it was not fair that the prosecution was giving evidence against them, because they simply did not know their right to do the same. They were also informed about the right to be present during all stages of trial, and that they, at any point, may object or correct information if they feel that it is incorrect, in consultation with their lawyer. The accused can always listen to the answers of the witnesses in their case, and immediately inform their counsel anything about the same. Mr. Verma stressed that they need to have effective commuication with their counsel to effectively defend their case. 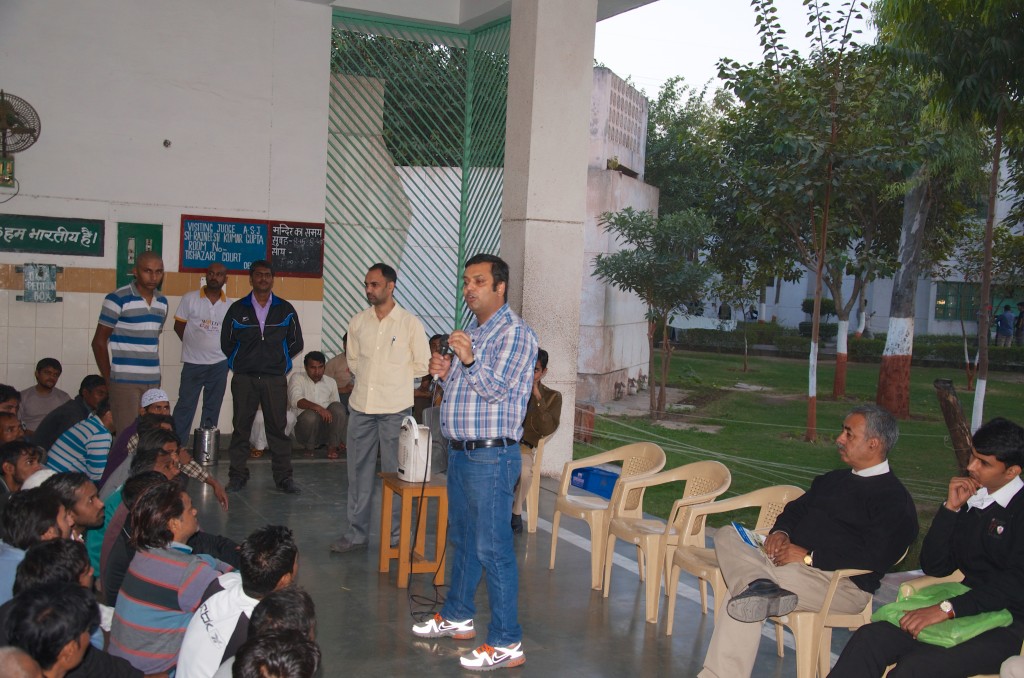 Another issue raised by the inmates was that of chargesheets not being filed. The IBJ India Team informed them about the right to bail in non-bailable offences, as stated in Section 437 in the Criminal Procedure Code (Cr.P.C). In non-bailable offences it is on the discretion of the Court to grant bail. But if the police don’t produce the chargesheet within a given amount of time, the accused may request to be released on bail as a matter of right under Section 167 of the Cr.P.C., provided that they are willing to furnish surety. If the sentence of the crime is less than ten years, and the chargesheet has not been filed, the accused is entitled to bail after 60 days of his arrest. In offences punishable above ten years, life imprisonment or capital punishment, the same goes after 90 days. The inmate can go to the legal aid cell in his jail, and write an application stating that it has been 60  or 90 days and that the police has not filed the chargesheet. In these cases, the inmate will usually be granted bail. 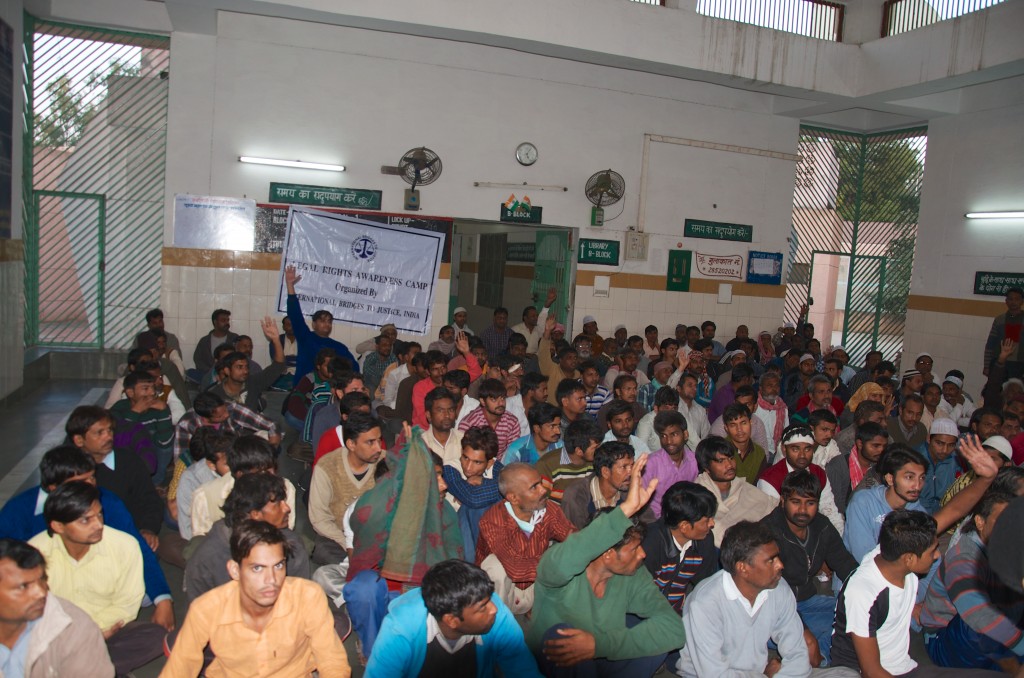 Interaction with the inmates.

In addition, the lawyers answered questions regarding plea bargaining, as introduced  by the Criminal Law Amendment Act in 2005. Plea bargaining is an agreement between the prosecutor and the accused where the accused will get some sort of concession in exchange of pleading guilty to all or some of the charges against him. Any offender can plead guilty provided that the maximum sentence for the crime is less than seven years, and that the crime was not committed against women or children.

Usually, the inmates will think that plea bargaining is acquittal of the charges, when it actually is a conviction with confession. In the session, IBJ India shed light on all sides of plea bargaining. If the accused pleads guilty, he will be registered as a convicted person. Among other things, he will not be able to get a government job. Also, if he is arrested a second time the judge will consider him a habitual offender and, because of this give a harsher punishment. Therefore, it is very important to inform the inmates about all the aspects of plea bargaining. 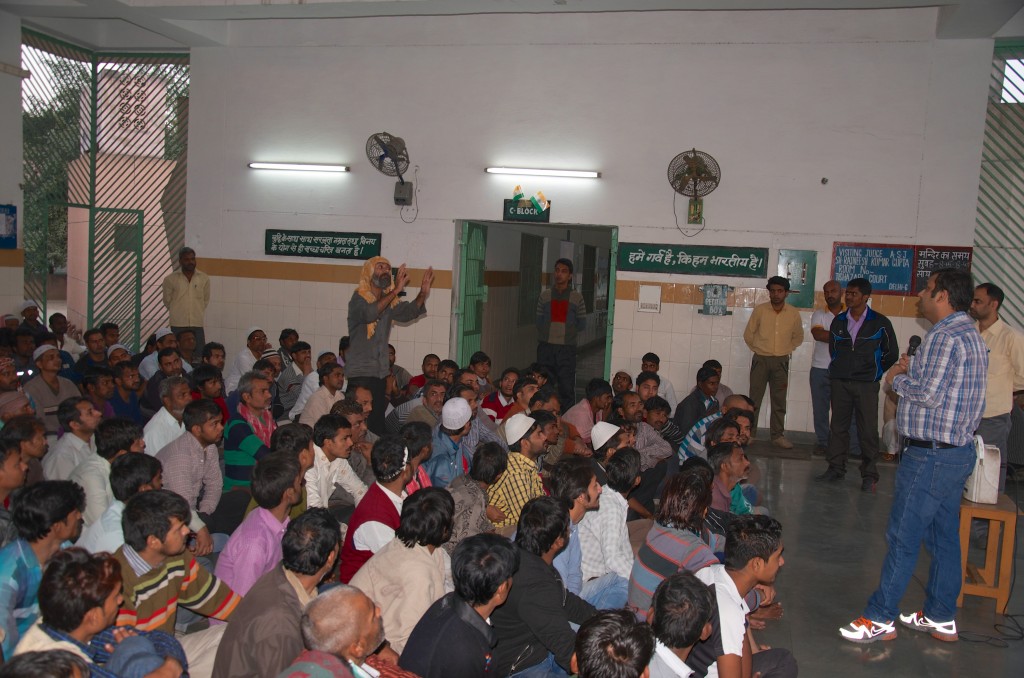 One of the new-comers talking to Mr. Ajay Verma.

As expected, many of the new-comers that we met in the New-Comers Ward were accused of petty offences. One of the inmates had been arrested for electricity theft, and was languishing because of lack of legal representation. IBJ India’s Duty Lawyer Mr. Ashwani Kumar Bali took his case and will be filing an appropriate bail application. The lack of knowledge of the right to bail in bailable offences, as prescribed in Section 436 in Cr.P.C is the reason why inmates remain in jail for at least 15-30 days when they are not able to furnish surety. The inmates were also informed about the legal aid centre in their cell and how they can go there to get legal assistance free of cost. They were requested to report to the Superintendent of the Jail whenever any legal aid advocate asks for money. 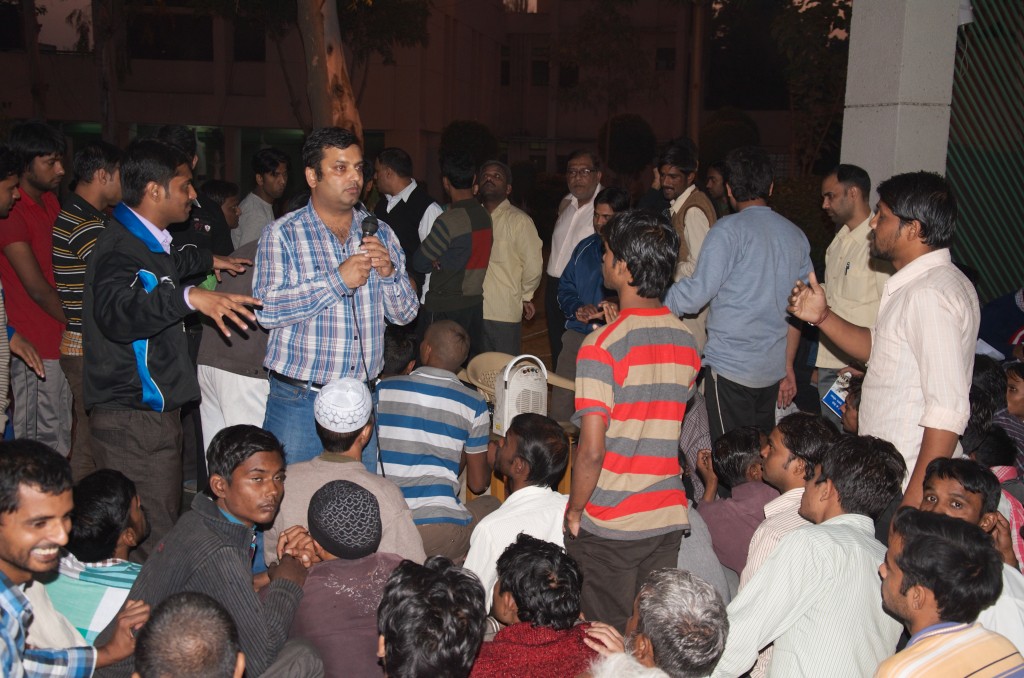 In the last part of the session, the inmates came up to the IBJ India Team and asked for advice about their cases, showing their chargesheets, and the like. The team also identified a few people without legal representation, and Mr. Ashwani Kumar Bali, Duty Lawyer IBJ India, visiting Jail No. 8 and 9, agreed to take their cases. 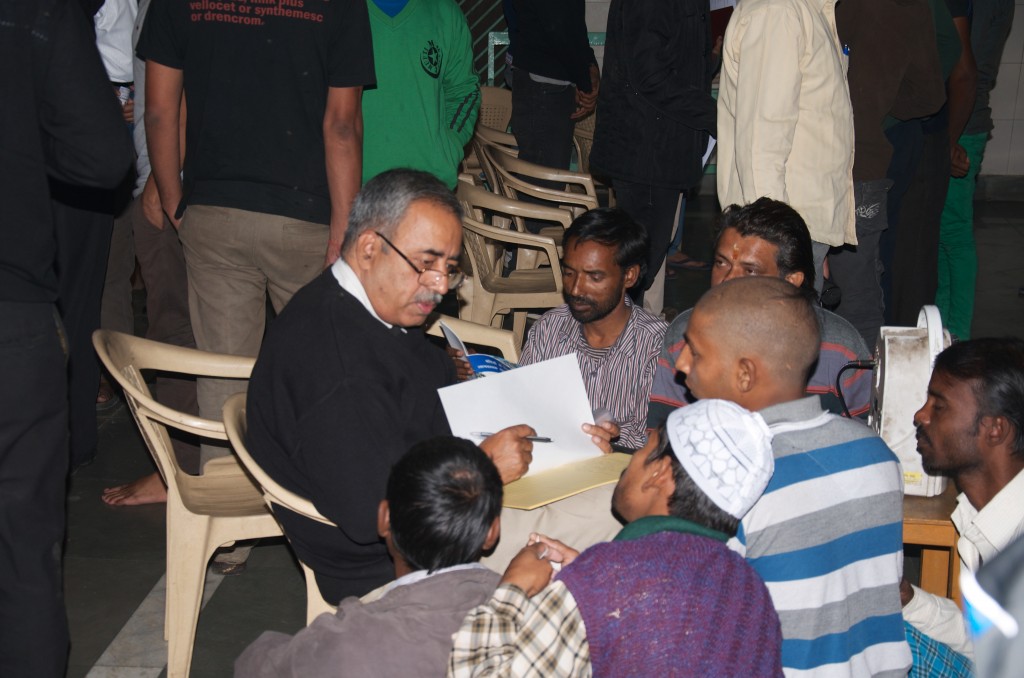 IBJ India will continue with awareness events as long as the need is there. We are grateful for the good cooperation with the prison authorities and their help in providing easy access to justice for the inmates. We are looking forward to the conduction of future events.