On 07th December, IBJ India conducted a whole-day roundtable for welfare officers in Tihar Jail. Titled ”Role of Welfare Officers in Ensuring Access to Justice and Legal Aid”, the roundtable was the first of its kind. Under the guidance of Mr. Ajay Verma, Advocate, Senior Fellow IBJ, a group of people were gathered to discuss, share experiences and gain knowledge on the topic. One of the main outcomes was the acknowledgement of the need to bridge the gap between custody and welfare- officers. The lack of coordination affects the well-being of the inmates and their access to basic amenities and legal awareness. Six welfare officers, four law interns, IBJ India’s Duty Lawyers Mr. Shiv Kumar Dwivedi and Mr. Ashwani Kumar Bali, and Principal Law Officer of Delhi Prisons, Mr. Sunil Gupta attended the event. 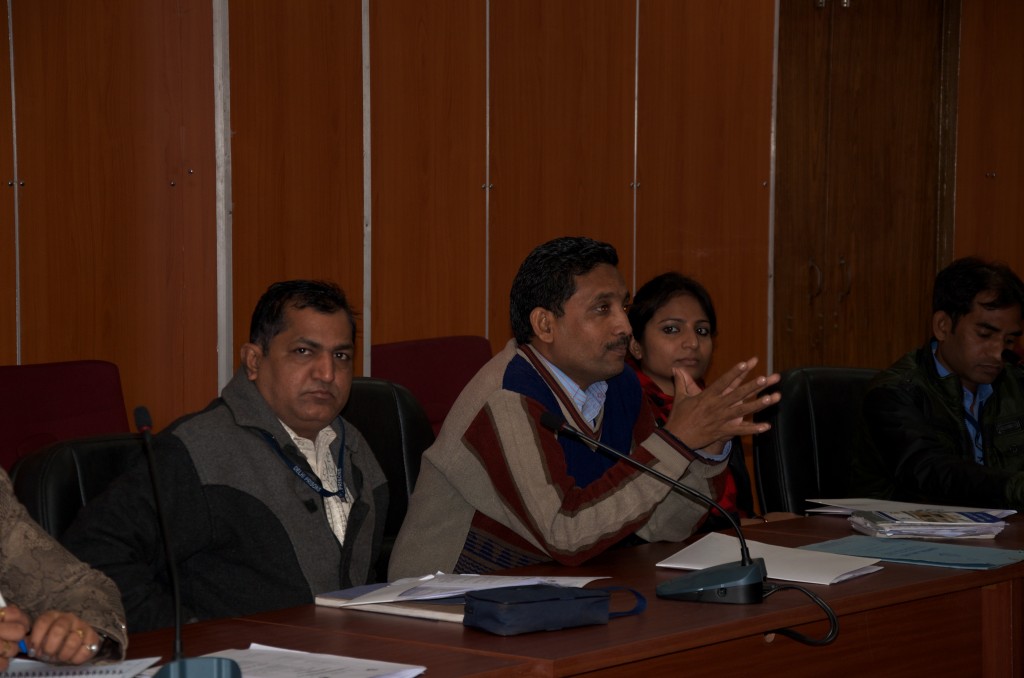 One of the Welfare Officers talking about the basic duties in his profession.

Session one of the day was held by Mr. Ajay Verma. He introduced the methodology that IBJ india uses in capacity building of prison administration by conducting trainings and awareness events for prisoners as well as prison officials. The participants of the roundtable introduced themselves with name, jail number and years in the profession. Most of them had more than ten years of experience, but others were newly started. They shared general duties, challenges and experiences from the profession. 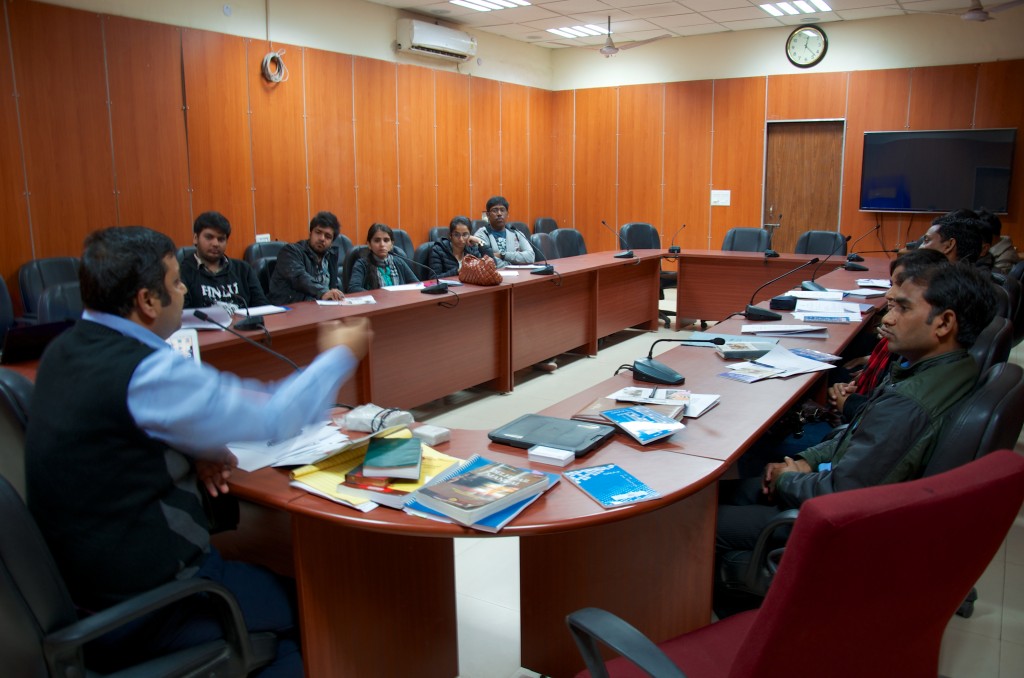 Mr. Ajay Verma initiated the roundtable by giving a brief introduction of International Bridges to Justice.

In 2002, 7 welfare officers were posted in Tihar Jail. On behalf of the Department of Social Welfare, their role is to provide basic facilities of all aspects to the prisoners. It was important for IBJ India to highlight how the welfare officers are the backbone of prison management. Prior to 2002, only custodial officials worked in the jail, with custodial and not welfare-related tasks. As pointed out by one of the welfare officers: ”If you want to move a vehicle, you need a person to drive. First then it will move. In the same way you can not imagine welfare activities without welfare officers in the prison.”

The session continued with the welfare officers talking about their specific duties. ”Our first duty is to counsel newly admitted prisoners on their very first day in prison”, one of the officers said. He pointed out that the inmate typically is depressed and unaware of his rights. ”We interact, counsel and help him to adjust to the prison”. He also explained how the welfare officers try to enable the inmates to demand their rights by providing information on legal aid, rights and procedures. They are doing a wonderful job with constantly providing information about legal concerns. Ultimately, the welfare officers are changing the life of the inmates. 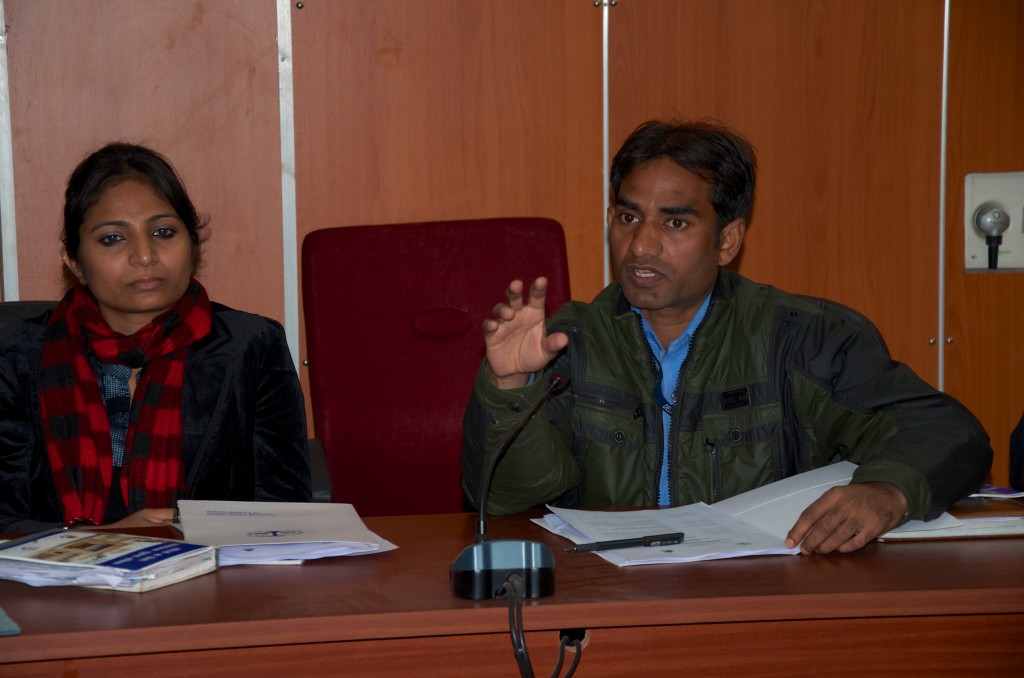 At the same time, there is always a gap between theory and practice. IBJ India wanted to identify challenges the officers face in their everyday life, and spent some time discussing this. As expected, a main problem is limited access to resources. One of the officers kindly pointed out that when the number of inmates in a jail is more than a thousand, it is impossible for one person to go to each and every corner of the wards. This is very frustrating for the officers as they have a big responsibility on their shoulders but they are unable to fulfill their tasks.

The lack of resources is closely related to overcrowding. A huge number of undertrial detainees is costing the management a lot of problems when the facilities ment to be used by a thousand people is being used by twice as many. The challenge with overcrowding is one of the reasons why effective legal aid and effective and speedy trials, especially to pretrial detainees is urgently needed.

The discussion on lack of resources led the officers to talk about what solutions they use to cope with the problem. For example, they will bring a chair and a mic to one of the wards, gather all the inmates and conduct an awareness session. Instead of simply talking about legal matters, many of them do Question-and Answer-sessions. They answer any question the inmate may have about their case in specific or about legal rights in general. Another thing launched in the prison is related to preventing self-incrimination, by using volunteer prisoners to report about the inmates. For example, if someone is depressed or suicidal, the volunteer prisoner will share this with the welfare officer, which will make the necessary measures for the person, like giving them counseling or admitting them to a psychiatric hospital. A part of the supervision system is also to deploy senior convicts in the new-comer wards, and act as they would in villages, where elders will interact with and advice youngsters. 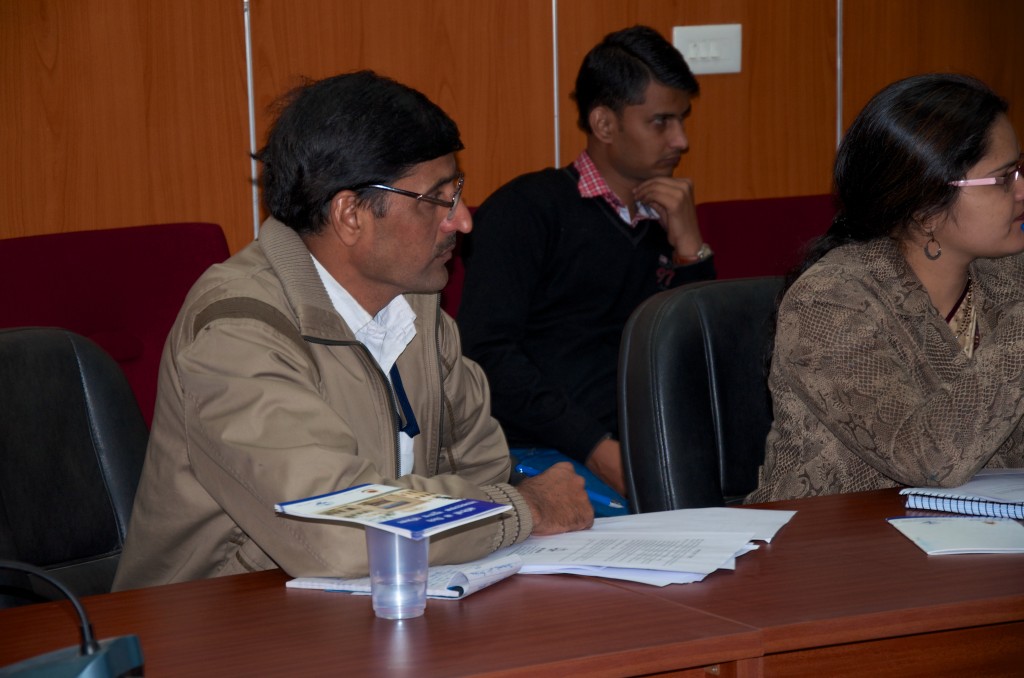 One of the main issues IBJ India wanted to discuss was the perception of jail. We asked the crowd: What do you think the role of a welfare officer is? Is the prison only for custodial purposes or should it also have a reformative function? Everybody agreed that jail is supposed to function like a hospital. The purpose behind a sentence is to cure the convict from the reasons or diseases that made him commit the crime. At the time of release the prisoner should be equipped to be a law obeying person of society. The welfare officers also discussed a main problem in the way jail is perceived. Generally, the custodial officers do not share the conception of prison as reformative, but primarily as a place to do your time and be punished for your crimes. To be a welfare officer the minimum requirement is a Master’s Degree in Social Work, while on the other hand, the custodial officers generally do not have higher education. There is a need to bridge the gap between the officers’ ideas of the functions of jail, and IBJ India will plan a roundtable for this purpose.
The last session before lunch was spent on talking about the general lack of legal awareness in India. People are not aware of their rights, especially in village societies and in poor communities. In the prison, the welfare officers are the pillars of interaction and enlightenment, and it is hard to underestimate their role when the inmates don’t even know that there is free legal aid available in the prison premises. Relating the discussion to Juveniles issues, Mr. Ajay Verma gave an example from a legal awareness event in 2011. It was held in Tihar Jail number 7, and the attendants were 18-21 years old inmates. After a session on the Juveniles Act (2000), 50 people came up to the IBJ India Team and said that it was likely that they were minors on the date of incident. With the support of the prison administration IBJ India interviewed and identified 25 possible juveniles, and on the basis of this and with supportive documents, went to the High Court. 23 of the 25 turned out to be juveniles. 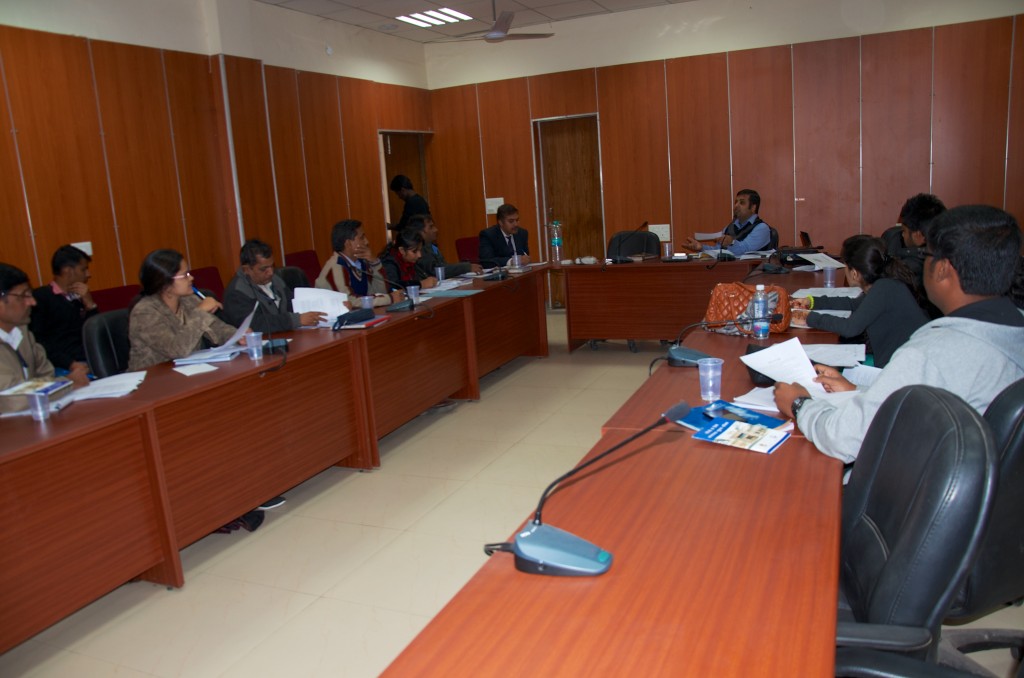 In the afterlunch session, the main topic was communication and interpersonal skills. Which skills should a welfare officer possess? What can be done to enable the prisoners’ skills? Mr. Ajay Verma initiated the session by sharing an example of an autowalla who did a crime to get 500 rupies. In jail, he was taught skills that enabled him to earn 1000 rupies a day, thus the motive for the crime was erased. This example demonstrates how reformative jailactivities are real life-changers for the inmates. The welfare officers laughed and shared how inmates coming as bathroom singers return to society as stagesingers, that can take 15-20000 rupees in a wedding performance.

Regarding skills of a welfare officer, the participants pointed out two main points. Firstly, you need to have bigger ears and nose than that of your mouth, as one of the officers phrased it. Basically, the role is to listen to the inmate. ”Listening will solve 25-30 percent of their problems, because a lot of things are filled up in their mind and they might not have anyone to speak to”, he said. 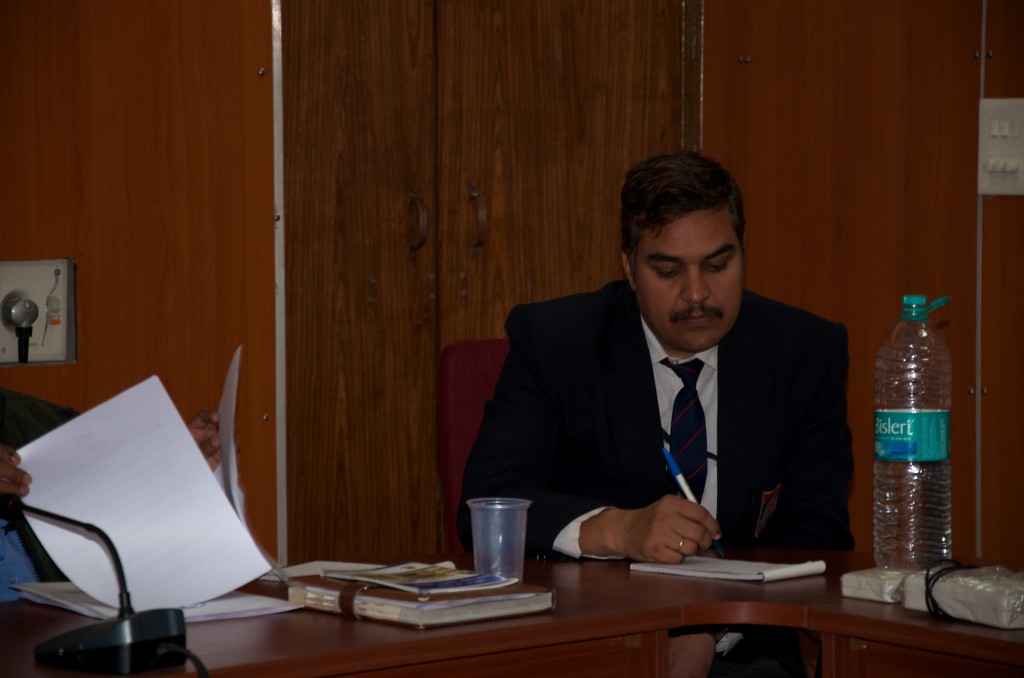 Secondly, the officer has to communicate who he is in a clear and understable way so that the inmate does not compare him to a policeman or a judge. The inmate should know that a welfare officer is separate from police authorities. The welfare officers’ role is to be there for the inmates’ psychological and reformative support and counsel. It is important to communicate to them that the officers will not for example witness against them if they share details about their crime. This trust and understanding about the relationship between an inmate and a welfare officer is also necessary in order to identify the factors that made the person commit the crime.

Mr. Ajay Verma then introduced some basic legal aspects of legal representation and emphasized the importance of it being effective, the goal of enforcing the right to a fair trial, and IBJ India’s strategy of direct interaction with different parts of the criminal justice system. The welfare officers talked about how things have changed since they were employed. The conception of jail is slowly changing for the better- from custodial to correctional- but lack of education and training of the custodial officers is still a big challenge.

The last hour was spent discussing juveniles, bail and parole. In general, new-comers are not familiar with Section 436, 436A and other important provisions of the Criminal Procedure Code. Section 436, which states that in bailable offences, if a person is not furnishing surety then he is supposed to be released on personal bond. Also, Mr. Sunil Gupta, Principal Law officer of Delhi Prisons, answered a couple of questions and shared important aspects of prison administration.

IBJ India is looking forward to continue the great relationship with Tihar Jail and to do an effort in bridging the gap between the custodial- and welfareofficers by conducting a second roundtable. Whenever we go in the wards to do legal awareness events for the inmates, we will make sure to also inform about the welfare officers and their role and duties. 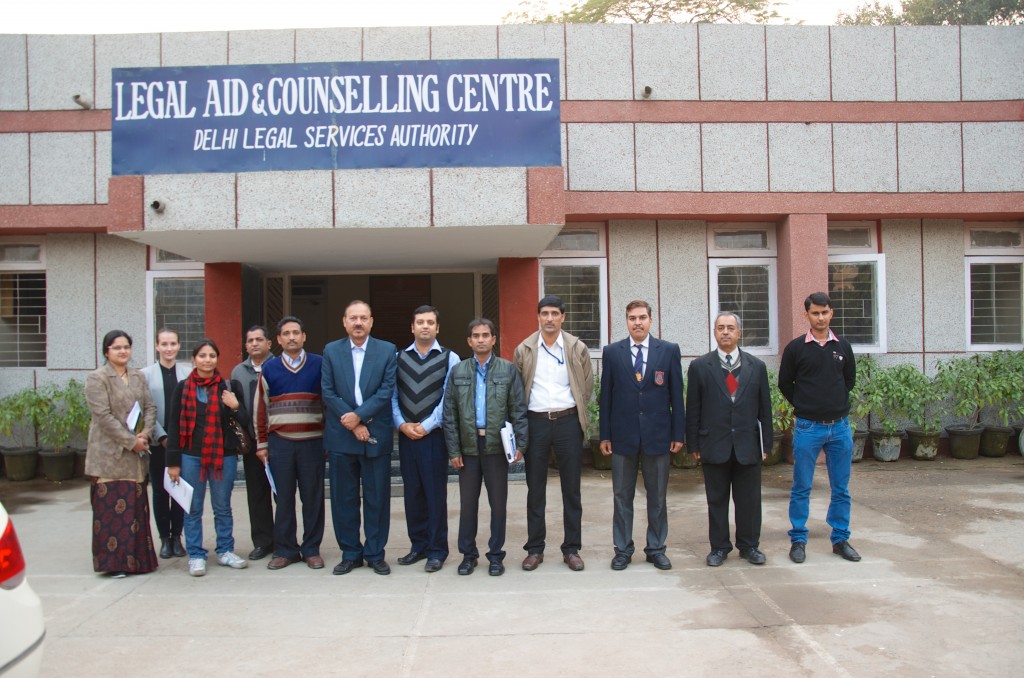