Back in 2006, eleven farmers in Takeo province were confronted by the head of the district who declared that he owns the land where they were farming and that it, in fact, belonged to the villagers. Takeo Court asked them to provide a deed of property to take a decision about the dispute. Vuty (not the client’s real name), a 58 years old rice farmer, brought the certificate to the court. Unfortunately, the head of the district also had a certificate stating that he was the owner of the same land.

Vuty went to a local legal NGO to get some help and was represented by a lawyer as the court requested him to prove that the certificate was a fake one. They have not been able to prove it and the court declared that the head of the district was the owner of the land. The latter offered Vuty and the other farmers to continue using the land to grow rice in exchange for a ton of rice every year. It was much more than their annual harvest and they had to refuse the deal. The head of district then ordered his guards to expel Vuty, his family and the other farmers from the land. On that night, the guards had some dinner and drinks. Apparently drunk, they accidentally started a fire that burned the barn. Fearing reprisals, they said it was Vuty and the farmers who came during the night to burn the barn to avenge. They were all accused of intentional damage (arson). According to its last experience with the Takeo court, Vuty did not trust that the Cambodian justice system was fair and he escaped before the police came to arrest him.

Vuty has been tried in abstentia and sentenced to 6 years imprisonment by Takeo court. He finally got caught in July 2012, 6 years after the occurrence of the facts, and was sent to Takeo prison. He did not know that he had the right to a lawyer or the right to appeal and neither the police, nor the prison officials, informed him about it. Fortunately, his relatives knew about IBJ and told him that he should ask for a lawyer. His wife contacted IBJ and Mr. Ouk Vandeth, IBJ Cambodia country director, came to meet him in August 2012. He agreed to represent Vuty and help him to appeal.

In Cambodia, there is only one Court of Appeal located in Phnom Penh, the capital, meaning that the court is overloaded and that appellants wait months before their trial, languishing in prison.

Finally, Vuty’s appeal hearing was scheduled on December 12, 2013, a year and a half after his arrest. 18 months in a prison where the food was insufficient and where he was sharing a cell with 44 other prisoners. It was Mr. Vibol, the IBJ lawyer in charge of appeal cases, who represented Vuty at the hearing. After investigation, he found three witnesses that agreed to testify during the hearing, explaining that Vuty could not be the perpetrator as he was with them when the offence was committed. As a result, the general prosecutor also requested the court to acquit Vuty because of the lack of evidence. Ten days later, the Court issued its verdict and Vuty was acquitted. Finally, on the last day of December 2013, Vuty was released and his wife came to bring him back home.  On their way back, they stopped at the IBJ office in Phnom Penh.

For Vuty, “there is no real justice system in Cambodia, at least not for the poor.  I am not blaming the police or the prison administration who are only implementing the judgments, but the judges of first instance. Without a lawyer I would have stayed in prison for 6 years.  I am really grateful to IBJ for the legal aid.” 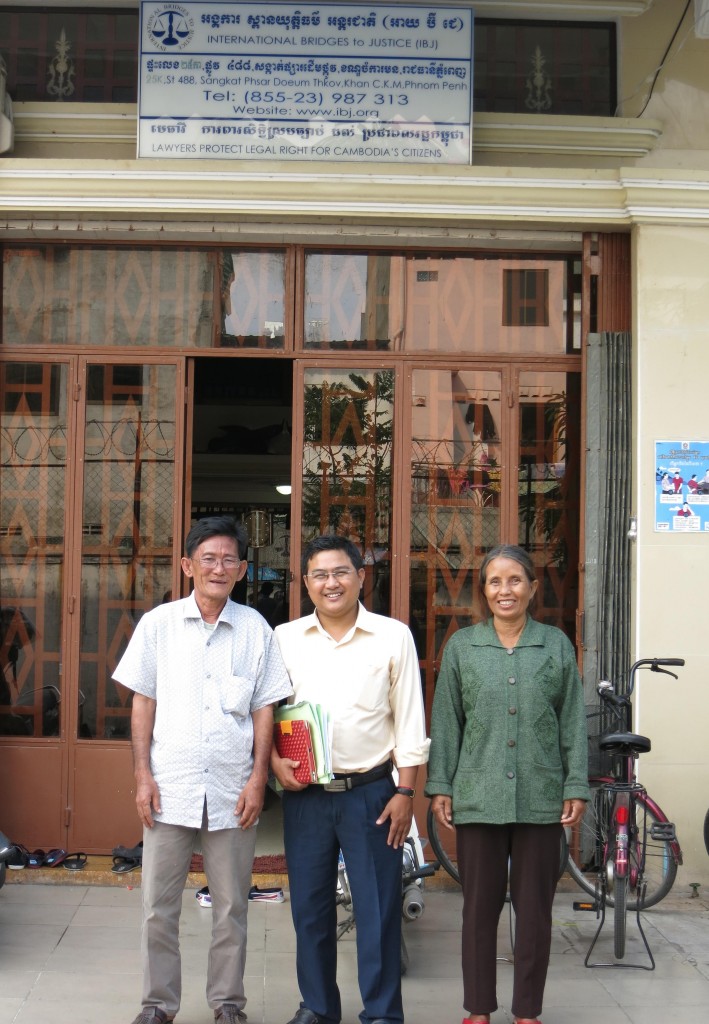 And his wife, with tears in her eyes, added that she really thanks the IBJ lawyer to give him back her husband, because they would never have been able to hire a private lawyer.

Vuty has 5 children who are old enough to work and able to support his wife when he was in prison. They still have two hectares of paddy fields in Takeo province where Vuty will be able to grow rice, as a free man.