On a beautiful morning, two young girls entered the IBJ office in Battambang, located behind the Provincial Court. They put their hands together and rose them up to their nose, greeting with the words “Chhum-Reap-Ssu-a”, “hello” in Khmer. They sat down, and we started to talk about what happened to them and to their other sister. 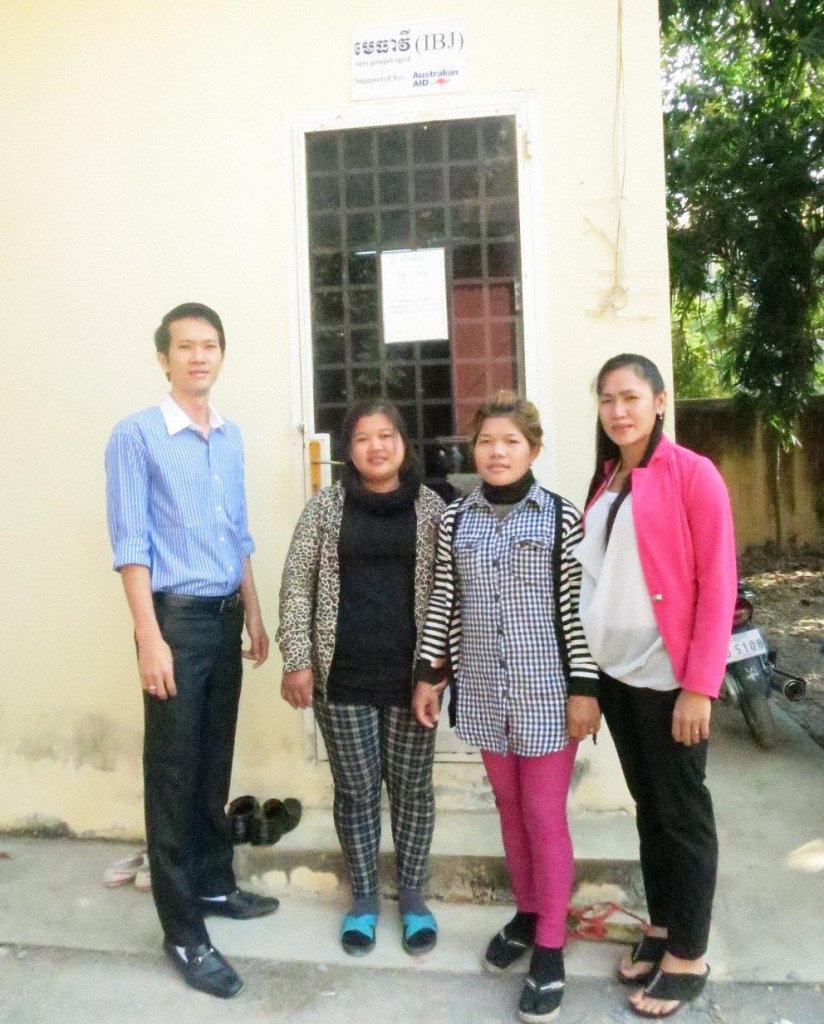 IBJ lawyer, IBJ clients and IBJ lawyer’s assistant in front of the IBJ office, in the court yard of Battambang provincial Court.

At quarter to nine, on 17th August 2011, Kanika (the oldest sister), Chenda (the second sister) and Cheata (the youngest sister), were selling cans of juice on the street like they do every day. On that specific day, they were putting more effort in their work because they were worried about their mother who was sick, so they wanted to earn enough money to be able to support her. While two customers were buying several cans of juice from their shop, Sophea, another proprietor of a small shop with similar goods in the neighborhood, was observing them. Seeing that customers seemed more interested by the three sisters’ shop, Sophea grew jealous. She started to insult the young sisters and seemed ready to start a fight. To Sophea’s injurious words, Kanika, Chenda, and Cheata replied that they were just selling juice for their living. Nonetheless, the fight intensified and became physical. The youngest sister Cheata was the only person who was injured. When the police arrived shortly afterwards, Sophea pretended that she was knocked unconscious. Even though Sophea had not been hurt, she deceitfully used the circumstance that she was pregnant to draw attention to her so-called fragility. As the police intervened, they questioned everyone involved in the fight. The three siblings answered that they did not commit any crime, nor hit anyone.

The day after, the three of them were summoned to the police station. When the authorities asked what had occurred the girls reiterated that they did not initiate the fight and did not hit Sophea. Fortunately, the police did not deem it necessary to keep them in provisional detention so they were able to go back home after the interrogation. However, three weeks later the court summoned the three sisters to inform them that they were all charged with intentional violence with aggravating circumstances against Sophea. The court also indicated that Sophea was seeking compensation for 4 million riels (about 1,000 USD).

Before the trial, the court informed Kanika, Chenda and Cheata of their right to choose a lawyer and informed them of IBJ’s legal services. The sisters had never heard of the organization before, but they decided to contact an IBJ lawyer for help. IBJ received this case on the 1st December, 2012 and the trial was held 9 months later, on 23rd August, 2013. Sophea came to the hearing with some of her family members as witnesses though none of them actually saw the alleged crime. With the help of the IBJ lawyer, the three sisters brought proper eye-witnesses to provide their testimony to the court. They reiterated the  fact that they did not commit any offense; a statement they kept throughout the case. The IBJ lawyer underlined the weak probative value of Sophea’s piece of evidence during the defense,  emphasizing that her family members were not even present on the scene of the alleged offense. Moreover, he pointed out the fact that there was no evidence of injury against Sophea. Consequently, the court dismissed the proof presented by the latter. The verdict was issued on September 20th 2013, epitomizing the effectiveness of IBJ’s lawyer defense strategy. The three sisters were subsequently acquitted.

Kanika, Chenda, and Cheata were able to resume their work. All of the siblings work to support their relatives. The sisters have two brothers, one of which is living in Thailand and working with their father. All of them have to work hard in order to earn enough money to support their family.

Kanika, Chenda and Cheata said that they were happy to meet the IBJ lawyer because they could not have defended themselves at trial without his representation. The oldest sister, Kanika, told me that she felt infuriated by the situation she had to face when she did not commit any crime. She strongly felt a sentiment of injustice for herself and her sisters. While all of them were feeling insecure at first as they did not know the role of a lawyer, they now understand it and keep spreading the word to the people about IBJ’s work as a legal aid NGO.