Gatavu Audace is a human rights defense attorney in Bujumbura, Burundi, who has witnessed the plight of people living with HIV/AIDS in Burundi’s criminal justice system. These experiences moved Audace to use his legal skills and connections within the legal community to create a network of pro bono defense attorneys to provide legal counsel to the most vulnerable within the criminal justice system who are without any legal defense.  Audace’s courage to devote his professional life to defending those most marginalized was awarded by International Bridges to Justice with the JusticeMakers Fellowship in 2012. Now two years later, he continues to raise the voices of the hopeless with renewed persistence. 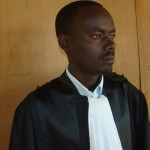 When I applied for IBJ’s JusticeMaker Competition, I was working with people living with HIV/AIDS and I was shocked by the way they were threatened in prisons. They were {not} considered as normal prisoners because of their incurable disease. I applied therefore to save some from prison as soon as possible.

I faced the challenge of talking to judges that do not {give} consideration to the particular situation of prisoners with HIV/AIDS. There was a serious problem of undue delay of procedures and these people were hopeless! Some of them refused to take their medication and died in prison just because they considered their life already lost!

I stood beside hopeless people and raised my voice for their cases. I encouraged some of them not to give up despite the hardships they were experiencing. With the $5000, the prison officials and prisoners and the community knew that these people have value and are worthy. In representing them before the court, I gave them the consideration they longed for since they knew they was HIV positive.

I am always learning from other Fellows. I now belong to a community of service providers to which I am conscientious of the quality of their work.

IBJ’s JusticeMakers Competition is an opportunity that is given to YOU to serve YOUR community. Don’t miss it! Try! You’ll never know if you do not try!