On August 3, 2004, in a remote commune situated in Kampong Thom province, Sry Veng’s family and their neighbors were sitting at home and quietly watching what was on TV that evening when three men burst into the house and shot Veng, assaulted his wife, and stole jewels from his neighbors’ house. Veng died as a result of his injuries while he was transported to the hospital by boat. In the aftermath of this traumatic incident, Veng’s wife started to work with the judicial police to identify the perpetrators and bring them to justice. She was able to describe two of the three aggressors. 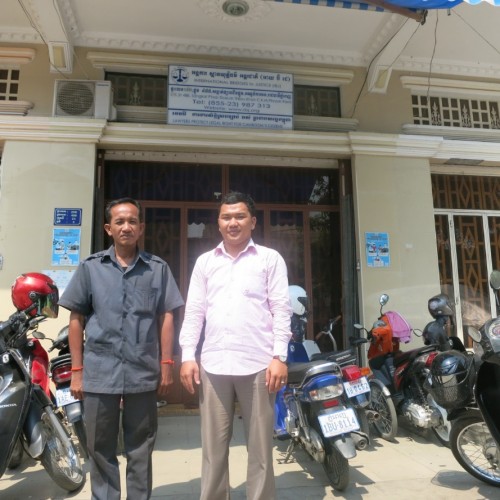 Sokem and Sophoes, IBJ Lawyer Assistant at the Court of Appeal in front of IBJ office in Phnom Penh

Sokem was living in a village nearby and had already been to see Veng and his family in the surroundings. On December 31, 2004, he was arrested by judicial police officers. Sokem did not understand what was happening and he was taken straight to the prison, to be held in pretrial detention. From that day on, he was to stay in jail for ten years. Shortly after his arrest and detention, he was taken to court where he was informed that he was charged with premeditated murder and use of illegal weapon, incurring life imprisonment according to article 200 of the Cambodian Criminal Code. No one informed him of his right to seek legal representation. He was languishing, waiting in prison prior to being summoned for his trial on March 13, 2006.

Before the first trial hearing, the court assigned Sokem a lawyer that he just met one time before the lawyer had to defend his case in front of the judges. Sokem did not know whether he was a private lawyer, or a lawyer from the Bar Association of the Kingdom of Cambodia, assigned to represent his case pro bono. As a matter of fact, he was charged with a felony and, in this case, legal representation at the trial hearing is mandated by the Cambodian Criminal Code of Procedure.

At that point, Sokem still did not know why he had been arrested and he did not understand the criminal procedure which was unfolding before his eyes. For the first hearing, Veng’s family who had joined the procedure as civil parties gave confused answers about the description of the alleged perpetrators. During the second trial hearing, they presented witnesses who did not clearly remember the physical appearance of the offender. But when they saw Sokem, they affirmed that they knew him. The court followed their testimony and sentenced Sokem to 15 years of imprisonment. Sokem does not remember what his lawyer said for his defense at that time, but he had clearly not brought exculpatory evidence in favor of his client. Yet, after the announcement of the decision, the lawyer advised Sokem to appeal the judgment. After that, Sokem did not hear anything on the development of his case. He was still in the Correction Center 3, a provincial prison located in the neighboring province of Kampong Cham, and only knew that his cases had been sent to Phnom Penh for the appeal process.

The Court of Appeal opened the case on February 19, 2010, six years after the fact. Sokem was not informed of the hearing and was not able to attend it. In compliance with Cambodian criminal procedure, when the accused does not appear for trial and there is no proof that he had knowledge of his citation to the court hearing, the Court of Appeal issued a “default judgment” in his absence2. In this decision, the Court of Appeal upheld Sokem’s sentence.

Late 2014, IBJ received the case as part of one of its projects with the United Nations Office of the High Commissioner for Human Rights (UNHOCHR) in Cambodia. Sokem’s case was one on the list of people identified by the UNOHCHR with appeal proceedings pending for more than five years and with no trace of their trial documents. The IBJ lawyer and lawyer assistant investigated at the Court of Appeal on Sokem’s case and found out that he was never notified of the Court of Appeal’s hearing and judgment. The IBJ team met Sokem in prison and informed him of the current status of his case. In these circumstances, the only action available for the defense of the accused person is to submit a motion against the default judgment once the accused has got actual knowledge of it. The motion has the effect of voiding the judgment which was issued in the absence of the accused. The IBJ lawyer submitted the motion to the Court of Appeal on December 24, 2014. As a result, the Court of Appeal had to entirely re-examine Sokem’s case.

In preparation for the new hearing, the IBJ lawyer met with Sokem’s family and friends and found out that he had an alibi against the accusation which had already cost him heavily. His friends could testify that at the time of the incident, Sokem was fishing with them in another place, far from the crime scene.

The IBJ lawyer convinced the witnesses to provide their testimony at the Court of Appeal, while at the same time arranging Sokem’s transportation for the 225 km separating CC3 from Phnom Penh for him to attend his trial. During the trial hearing, on February 20, 2015, the lawyer called the witnesses who, by their testimony, brought in the case an important exculpatory element. The lawyer also backed his defense strategy on the civil party’s hesitations and unclear answers regarding the identification of the offender. Becoming convinced of the weaknesses of the accusation against Sokem, the Court of Appeal acquitted him.

After 10 years spent in jail in very unclear circumstances, Sokem was able to walk out of the court room cleared of all charges when the Court of Appeal announced its final decision on March 9, 2015. Before this misfortune, Sokem did not know that organizations such as IBJ existed. He went through a very difficult time in prison, lacking proper food, appropriate care when he fell sick, and with only one or two visits from his family per year. His wife and four children could not afford frequent travels to the prison. Sokem entirely feels the meaning of the five years of imprisonment he was saved from thanks to IBJ’s intervention. Still recovering from this painful experience, Sokem is taking time to rest before having to find a new job to support his family and ensure that they have a brighter future.

1 Names have been changed for this story. The client consented for his story and picture to be shared.
2 Cambodian Criminal Procedure Code, Article 362.
5 August, 2015 at 2:45 pm ibj #pretrialdetention, Cambodia, torture Activities, Cambodia, Cases, Country Programs, English, General, Torture Share via: