Back in May 2017 IBJ’s DRC team coordinated a round-table event between several stakeholders in the Congolese justice system.  The discussions highlighted that often witnesses and victims of crimes in the DRC are too afraid to attend court hearings, wrongly believing that they themselves will be arrested. This frequently led to trials being delayed and the accused person being detained for unreasonable amounts of time before the trial could go ahead. 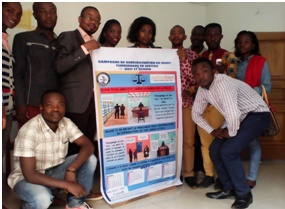 The IBJ team with members of the Bukavu Professional Body of Judicial Defenders and students from the Catholic University of Bukavu.

As part of their ongoing effort to strengthen the justice system in the DRC, IBJ partnered with the Bukavu Professional Body of Judicial Defenders and students from the Catholic University of Bukavu to host an awareness campaign on the importance of giving testimony in court, and the rights and responsibilities of the accused.

On August 12 2017, the team spent time in three of Bukavu’s communes, Bagira , Kadutu, and Ibanda, speaking in numerous places including churches, market places, and colleges. Leaflets were  handed out in both French and Swahili and focused on informing people of the way the justice system works, and the importance of ensuring accused persons have the right to a fair trial.

The team estimate that they spoke to 11,085 people throughout the campaign. IBJ would like to extend our thanks to the Bukavu Professional Body of Judicial Defenders and the Catholic University of Bukavu for their collaboration on this project.