“It was with gratitude for the abundance of your faith and support that in 2010 we celebrated the tenth anniversary of International Bridges to Justice.

What began in China, where we have now established regional defender resource centers, distributed nearly a million rights awareness posters with the Ministry of Justice’s logo, and trained thousands of lawyers and police, was followed by another major first – a defense skills training for 200 lawyers in Vietnam. We then began a program in Cambodia, the country that inspired me to start IBJ after my encounter with a 12-year-old boy in pre-trial detention for stealing a bicycle.

Our next foray was into India, where we conducted the first national defense training in partnership with the government’s legal aid authority, reaching legal aid lawyers in all 28 states. Soon thereafter, we expanded IBJ’s programming into three of Africa’s most challenging countries: Rwanda and Burundi, post-conflict states that are scarred by genocide, and Zimbabwe, which was at the peak of overwhelming political and economic instability when we entered.

In nearly all these ventures, we moved forward against the initial advice of many who were certain we would fail. We did so out of a firm belief that the needs are greatest in countries like these. We are grateful for your leap of faith with us, allowing us to work with defenders throughout the world to kindle the flame against darkness.

Cambodia perhaps best exemplifies how far we have come in such a short period of time. As the only NGO there focused exclusively on criminal legal aid work, IBJ now represents indigent defendants in 13 out of Cambodia’s 24 provinces. In three provinces where IBJ has legal aid centers, Takeo, Prey Veng and Pursat, investigative torture today is almost 100 percent eliminated, no longer being the rule but rather an exception.

We have implemented other pioneering initiatives, most notably our JusticeMakers program. Following the three online competitions we have conducted since 2008, we have provided funding for innovative criminal justice reform projects undertaken by 33 JusticeMakers Fellows from 25 countries and built a global platform utilized by over 6,000 lawyers and human rights defenders. We have piloted an exchange program called “Communities of Conscience”, in which defense lawyers from developed countries provide training, mentoring, and support to defense lawyers from developing countries. I have been astonished by the very real and tangible progress that is possible when sparked by mentoring support and even small amounts of financial capital.

While IBJ’s accomplishments have been many, none could have occurred without the incredible support of all of us defenders, donors, volunteers, staff, board members, and supporters working together to bring this message of hope to the world. Standing with us, having the courage to see the reality of the situation and the leadership to move beyond and see the possibility, you have had the prophetic imagination to create the IBJ that exists today.

Thank you for being an indispensable part of IBJ’s first ten years. I know that in the next ten years, with the wholehearted commitment of all of us, we will bring the dream of legal protection for all to fruition.”

Karen I. Tse
CEO and Founder 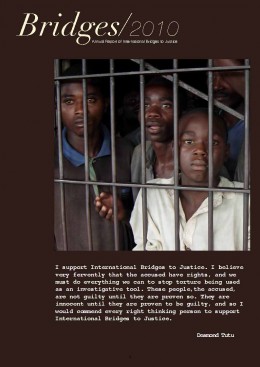