“Last week we held a ceremony in honor of the courageous human rights defenders who had been visiting from Burundi. Inspired by the journey they’ve embarked upon with IBJ, our partners wanted to dance, sing, and revel in the hope and dedication that had been ignited within each of them. Only one limitation – we had no instruments. It didn’t take long, however, for a few lawyers to begin by drumming a beat on the table. All fifteen Burundian defenders soon joined in, creating vibrant music. They danced, they sang, and they reveled; they acted on possibility rather than dwelling on limitations. In a remarkable demonstration of resourcefulness, they created what they lacked.

Since IBJ began its journey in 2000, there have been many who have said that what we are trying to accomplish simply can’t be done. It is that very view that has motivated all of us to work harder and smarter so that the end of torture as an investigative tool and due process rights for all in our lifetime do in fact become a reality. As I write to you, I am humbled and proud to acknowledge that while our vision and mission remain the same, the world is different today because of the work of our team and the support of all of you. Until recently, I could not find the words to describe the countless examples of the relentless ingenuity of the global IBJ team I see every day. One of my colleagues recently came from Cambodia, however, and brought me a t-shirt that seems to define on a deeper level the unique and impressive character IBJ has forged: “Same same, but different.”

Same same but different, IBJ is unlike those doing good work on paths paved by others; we pave the way by walking on it. We bring our mission to life in the everyday practice of justice through innovation, resourcefulness, perseverance, and unwaver- ing dedication to our vision. Indeed, we’ve made the way so clear that others have begun to follow suit. Our annual JusticeMakers competition, launched in 2008 and currently enabling 46 “heroes of criminal justice” to imple- ment their initiatives throughout the world, is now being replicated through others’ micro-grant projects.

We are same same but different from the traditional approach of focusing on addressing broken justice systems through after-the-fact prosecution and legal interventions once torture has already occurred. Instead, IBJ insists on intervention in the beginning of the criminal justice process through implementation of due process rights and the installation of systematic early access to counsel. Innovation lies at the very core of IBJ, as evidenced by its approach that engages the entire legal system—attorneys, judges, police, prosecutors, prison officials, and tortured detainees.

However, innovation alone is not enough. It is through the pairing of creative solutions with a strong sense of perseverance that IBJ has brought about tangible results, allowing us to continue our forward march even when the path we are paving gets rocky.

We began planting seeds of change with the Chinese Ministry of Justice in 2001, when working in domestic criminal law was unchartered territory. After we signed a Memorandum of Understanding with the government and opened this door internationally, others successfully adopted our model and also began implementing significant change. Much of the work we have done together has taken root. After more than a decade, the revised Chinese Criminal Procedure Law finally came into effect on March 14, 2012, specifically incorporating concepts advocated by IBJ. Our IBJ trainings-of-train- ers since then have been both educational and celebratory.

Our work in Cambodia is similarly reflective of this winning combination. Having started as a fledgling program, it has seen the rise of nine Defender Resource Centers serving 17 provinces and handling over 1,000 cases each year.

IBJ held its first training in Burundi in 2008 at a time when there were no laws criminalizing torture and when the prospect of government involvement in legal aid was not even under consideration. A number of government officials, including Burundi Supreme Court justices and the chief of police, were in attendance at this training, where we advocated for a policy change; the very next year, legislation banning the use of torture was enacted. After years of work on the ground, the Burundian government- through the Human Rights Commission-recently agreed to contribute toward the travel costs of our legal teams as they move throughout the provinces of the country to represent the indigent accused. The “Communities of Conscience” event that recently brought the Burundian defenders (and their inspirational music) to Geneva was first proposed more than six years ago. These are just a few of IBJ’s small, incremental steps that have turned out to be huge leaps toward a more just world.

It is through IBJ’s efforts that the poorest of the poor, those most vulnerable to abuse and torture, are now able to obtain justice through proper legal defense. IBJ continues to be steadfast in its vision; we don’t dilute our mission, and we don’t opt for the path of least resistance. Most importantly, we refuse to be sidelined by the road-blocks we meet along the way. In a recent meeting with one of our African defenders, I mentioned a concern regarding the precarious state of the world economy and funding for her program. Shaking her head, she took my hand and said, “Karen, we will keep on, keep on, keep on with IBJ. Our vision will not be defined by our budget; we are here to do what needs to be done, and we will find a way to do it.”

It is with that heartening example of dedication to our cause in mind, one that gives me such great hope, that I would like to leave you with the words of Václav Havel: “Hope, in this deep and powerful sense, is not the same as joy that things are going well, or willingness to invest in enterprises that are obviously heading for suc- cess, but rather an ability to work for something because it is good.” Justice to every man, woman, and child on this planet makes good plain sense. More than that, it is a moral imperative, and we are working toward that goal with every passing day.

Your continued support matters more today than ever before. Thank you so very much.”

Karen I. Tse
CEO and Founder 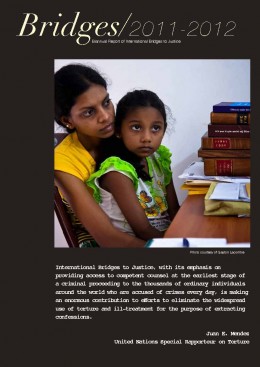