JusticeMakers fellow Malik Tahir Iqbal paid a visit to the Malir Courts District Jail with two other members of the Legal Rights Forum team, Safi-ud-din and Shoiab Safdar. The main purpose of the visit was to assess whether juvenile prisoners are being held in a secure environment and that their legal rights and protections are being upheld.

The team spoke with various police-officials, including the chief officer, and asked them to fill out questionnaires. It quickly became evident that a number of them were unaware of the existence of any legal rights for juveniles.

Juvenile and women prisoners were being held at the same institution, and two of the cells at the Malir Courts District Jail were holding both adult male prisoners and juveniles. The team also met with inmates to hear views on the conditions they are subjected to. They complained about the behavior of two specific police-officers and the LRF have promised to take action. 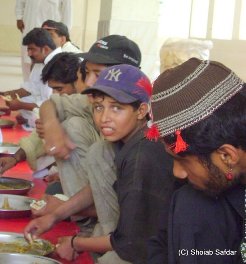