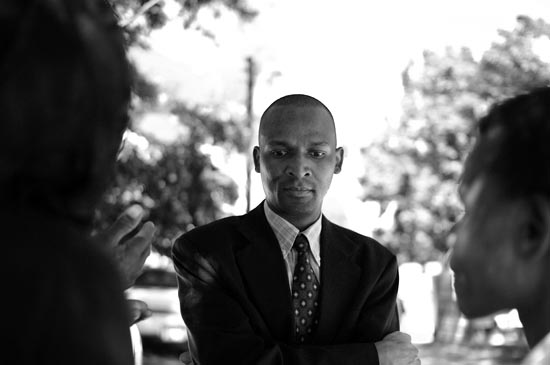 Tuesday morning was an early start for CLEAR advocate Peter Onyango who set out for Oyugis, a small town south of Kisumu to represent a nine year-old girl in a defilement case referred to CLEAR by World Vision.On the 29th of January the girl was out buying food. On the way she met two men returning from a hunting trip who offered her a rabbit. She refused. Then, one of the men forcefully took her into the bush where he sexually molested and defiled (raped) her, later confirmed by a doctor in hospital. The people of her village found the man and arrested him.

CLEAR staff take few cases outside the city. With a limited budget, travel costs outside Kisumu add up quickly, and the four hour trip to the rural courthouse by bus, matatu, and motor bike can be very tiring. Although Peter arrived to court just in time, the defense lawyer failed to appear due to illness and the hearing had to be adjourned yet again.

Peter found the family of he girl walking quickly away from the courthouse after the court broke session. They were understandably frustrated, but Peter reminded the family that criminal proceedings take time and encouraged them to keep coming back to complete their case. Discouraged by the complicated and lengthy trial procedure, some families give up on their cases before the court concludes proceedings. They never find justice, and some are even sued later for defamation of character.

Many factors prevent families from pursuing justice, such as the inability to afford an advocate and interference with witnesses. But even the cost of traveling to the courthouse can be a barrier. This family is only able to attend court because of assistance from World Vision who drive them to and from the hearings.

The father explains that he wants to see justice done so that his daughter’s case is a lesson to others. But justice in Kenya is expensive, and without the support of a CLEAR advocate their case may not have proceeded as far as it has. Peter explains that this family requires constant encouragement, support a state assigned prosecutor with tens of such cases would not be able to provide.

Overall, the family comments that they have seen CLEAR’s assistance in a great way, even inviting Peter to visit them in their village. The next hearing is scheduled for the 7th of July, at which time the mother will present evidence.