IBJ has just completed an enormously successful criminal defense training in Kigali, Rwanda. Led by a dynamic tandem of two defense attorneys, Mehdi Benbouzid and Anita Mugeni, this training will long remain as a testimony of the importance of gathering lawyers is in standing up for the rights of the accused persons.

Most of the time, people blame overstretched resources as the main reason for the non implementation of the law. We cannot deny that working as a lawyer in Rwanda is more difficult than in the West. But lawyers are part of a system and are better equipped to understand how the system works best. Holding the keys of change, they have the most power to make positive change. Unsurprisingly, they are often the first ones to be eliminated when political instability, defiance, and conflict undermine the rule of law. 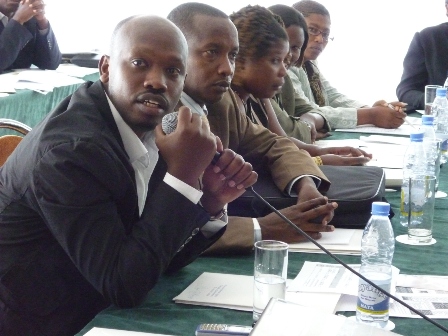 Above: IBJ Fellow John Bosco Bugingo was one of the more than 70 defenders on hand for IBJ’s training event. Some participants traveled more than 200 kilometers to attend.

As IBJ Founder and CEO Karen Tse emphasized throughout the training, overcoming the many challenges faced by the criminal justice system in Rwanda is not about pointing out the shortcomings of the current system. It is not about blaming the magistrates for long delays and prison overcrowding. It is not about pointing out the incapacity of the police to make human rights a breathing reality for every accused person. It is not about blaming the prison officials for inhumane detention conditions. It is about showing lawyers their crucial role as agents of change within a system to which they contribute and, therefore, have a moral responsibility to transform. It is about empowering them with the confidence and tools they need to affect change within their community. It is about building their leadership as human rights defenders so that they can influence and instill structural change within the system, best achieved by working closely with magistrates, prosecutors, police officers and prison officials. It is about appealing to their deep values and getting them the instruments to transform these values into concrete commitments.

This is precisely what has been accomplished in Rwanda. Pausing from work, lawyers took the time to think through the decision to become advocates and to defend the most vulnerable in their community. They mentioned defense, protection, and equality as the underlying values that pushed them to stand up for the rights of the accused. Building on these inner values, they were familiarized and able to practice defense tips and strategies which will enable them to effectively defend the disempowered.

Values are crucial. To bring about concrete change, leveraging the existing tools of a system is required, whether it is the law, negotiation, human relations, networks, structures, or another resource that is utulized. These tools must be used as weapons to influence the process in the desired direction. The vision driven from values only comes to life through a pragmatic approach of making the best use of the existing instruments to affect change, and, in particular, ensure that every man, woman, and child has systematic access to legal counsel. The participants were thus comprehensively trained in how to conduct a client interview, use nullity when legal procedure deficiency or of a violation of a fundamental right occurs, plead efficiently in court, and deal with the other actors of the system, particularly prosecutors, judges, and police officers.

The training provided an open space for lawyers to express not only their problems, constraints, and frustrations, but also potential solutions to improve criminal justice in their country. Relying on his rich experience as a criminal defense lawyer, trainer, and former ICRC official in the Middle East, Mehdi contributed to the debate and gave practical advice about his experience in overcoming such challenges, namely successful strategies he has employed and tips on how best to relate to the police, judges, and prosecutors. For example, Medhi explained that each time a policeman denies access to a client, he demands to meet with the police station chief. If this person also impedes him from accessing his client, he then talks to the prosecutor to tell him that the rights of his client are not respected. If, again, he is denied access, he then goes to the judge and demands that this fundamental right of defense is fully respected. Lawyers have been encouraged to make themselves known and respected by judges and act with leadership in solving problems.

Anita, the Rwandan trainer, echoed Mehdi with concrete examples of what usually happens in the Rwandan criminal justice system, noting the most pressing challenges requiring immediate action. Both gave keys to open doors of creativity and innovation in finding solutions to problems. Most importantly, several participants came to me at the end of the day telling me that, through the training, they had been aided in realizing that that the answers were in their own hands.

The participants were extraordinarily participatory. On the first day, 54 attorneys joined us. The second day saw a significant rise in the number of participants, ending the day with more than 74 lawyers in the audience. During the legal cartoon and ‘sharing your values’ exercises, the microphones did get much to rest, as everyone wanted to contribute to the foundation of a fairer criminal justice system in Rwanda. The dedication of these Rwandan lawyers is remarkable: on the first day, a women attorney whispered to me apologies for getting in and out of the conference room constantly. She explained that she been leaving to breastfeed her newborn baby in the car in the Mille Collines Hotel parking lot. Another participant explained me that he had to travel over 200 kilometers back and forth to get to the training. Further, these lawyers are overwhelmed with cases, some of them dealing with more than 100 cases at any given moment.

A real synergy emerged between the trainers, the rest of the IBJ team, the participants, and the representatives of the Kigali Bar Association, a close partner of IBJ in Rwanda. Before lunch on the last day of the training, all 74 lawyers spontaneously stood up, singing African songs with much energy and joy. At the closing ceremony, the IBJ team was loudly clamored, encouraged by the Bâttonier. Jeanne, a women defender and active participant in the mock-trial exercise, spontaneously stood up, took the microphone and explained how happy she and her colleagues were about the training and how useful it will be for their day-to-day practice.

Many advocates came to us asking for ways to be involved with IBJ activities, both in Rwanda and worldwide, namely how to support our mission and volunteer their time and expertise. As a response to this demand, a Criminal Defense Task Force has been suggested to keep the momentum up, provide a structure to catalyze all this good will and energy, and find concrete ways to set up a viable legal aid system in the country, especially in the provinces where the overwhelming majority of the population is defenseless.

I will personally never forget the faces of hope, courage, and determination that I came across during these three intensely human days of my life. Murakoze cane.