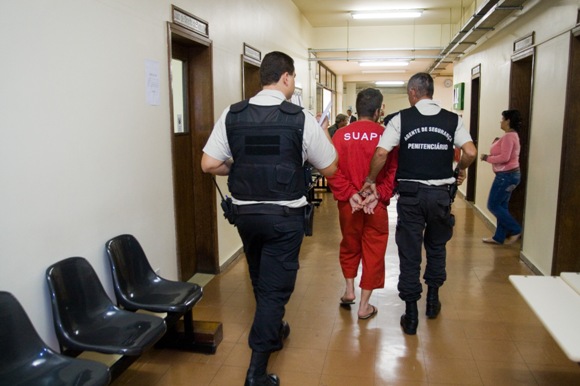 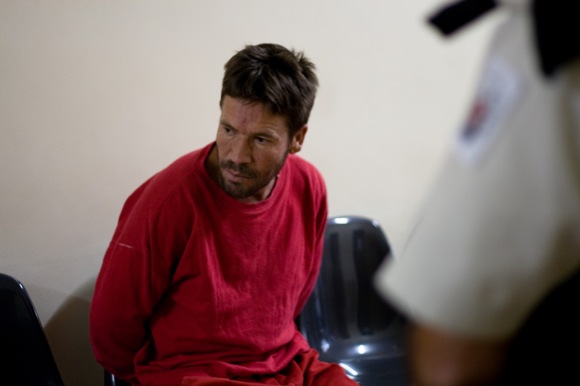 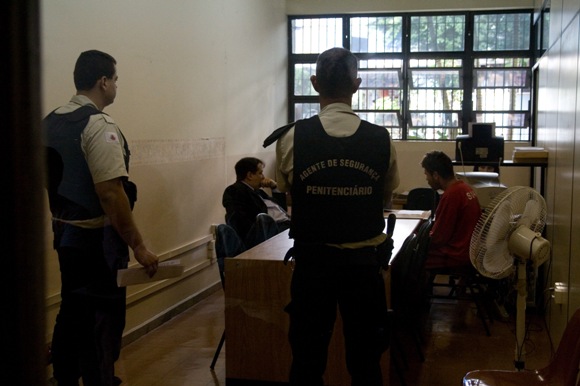 Above: Two security guards escort a prisoner to his trial at Forum, the civil and criminal courthouse in Divinopolis, Brazil. He is accompanied by Alessandro Garcia Silva (last photo, second left), a criminal prosecutor at Forum. Prisoners at Forum usually come from Presidio Floramar, an adult prison depicted here. (Photos by Michelle Ferng)

“There are no romantic crimes anymore, no more crimes of passion. Crime is now about drugs.”

“Over the past two months there has been a crime wave,” he nodded, which has resulted “in more homicides at this point than all of last year.” According to his knowledge, “all this new crime is related to drugs.” Ms. Cecilia Neves Silveira, IBJ’s in-country contact, showed us a book of Brazil’s criminal code at Antonio’s office that defines 24 ways to be a drug dealer. Drug trafficking is not actually a ‘permanent crime,’ such as kidnapping where a criminal is committing an on-going offense that permits police officers to search a house whenever they choose. Under Brazilian law, arrests for non-permanent crimes can only be made during daylight hours with a warrant from a judge.  However, Antonio taught us that the police behave as if drug trafficking was a ‘permanent crime’ and they invade houses in the middle of the night without judicial permission.

“This behavior,” he told us, “results in many innocents being arrested.”

What is most interesting to Antonio, amidst all this crime, is “witnessing the beginnings of a criminal mind.”

To explain what he meant, Antonio told us the story of a truck driver for CEASA, a fruit distributor. This man had been married. His wife left him. He came to Divinopolis to find her but instead found another woman addicted to drugs. He fell in love. Sold his truck. Bought drugs and became a dealer. Then, the woman left him for a man who recently got out of jail. When the other man got out of prison he found out about the former fruit truck driver who had since taken over his territory. Killed the truck driver. Now, the fruit truck driver’s son is accused of killing 13 other king pins in the area.

Switching gears, Antonio also explained the factors that make his job as a lawyer in Brazil difficult. First, he noted

“judges do not concede provisional measures.” What this means is that when a person asks for habeas corpus, for example, they are under Brazilian law supposed to be granted habeas corpus immediately. However, there are many cases where an accused man serves out his penalty before even being tried.

Antonio lamented the population doesn’t have the first idea on where they can go for more information regarding their legal rights such as habeas corpus. 2008 JusticeMaker Dr. Aziz Saliba is currently creating an educational DVD meant for the general public to instruct any individual how to write a habeas corpus and avoid illegal imprisonment in Brazil’s already overcrowded jails. Antonio noted that Aziz’s project was important and was sad to say that,

“stories I used to hear about a man writing his habeas corpus in blood and being released are Cinderella stories, they just don’t happen.”

He continued speaking about his desire to see “courses that teach judges about the problems lawyers have, to teach police about the problems judges have” and for all professions related to the justice system to be better integrated. Particularly, Antonio pointed out the problems of SETARIN, a database for arrest warrants that stops working after 5pm and is supposed to be integrating the justice centers of urban centers in and around Divinopolis. In addition to this problem Antonio noted that the Forum, a civil and criminal court here in Divinopolis, is only open from 12-5pm with all the lawyers and judges taking coffee breaks together in between.

Antonio looked to the future wishing for more “external judicial controls” such as a stronger Conselho Nacional de Justiça, which is a state organ to audit police and judiciary action. In the meantime, he is dealing with a crime wave and a slowdown in the economy which he said is often correlated with higher instances of sexual crime.

At the end of the day, Antonio puts his faith in family. He emphasized the fact that families teach children their morals and this has the biggest impact on limiting the potential for criminal behavior. In his opinion, the community must have common stories and myths to reinforce those morals.

“Decadence is related to a lack of myths,” he concluded. He held his head high and smiled, looking as if dignity itself were a myth worth posturing for.