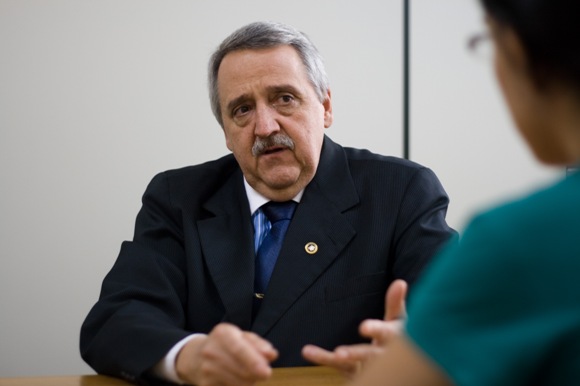 Above: Judge Dalton Soares, respected for his efficiency and service record, discusses the merits and distortions of Brazil’s legal system. Soares works in Divinopolis at Forum, a civil and criminal courthouse. 2008 JusticeMaker Aziz Saliba is producing a video in Divinopolis to educate the general public on habeas corpus and the legal profession on their options to appeal to the Inter-American Court. (Photo by Michelle Ferng) 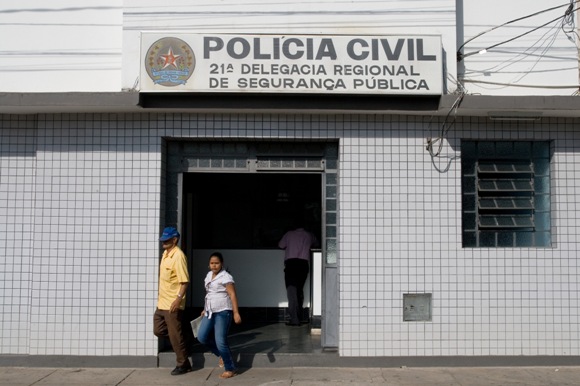 The Civil Police in Brazil have different responsibilities under the Constitution from the Military Police and are responsible for conducting investigations. This station in Divinopolis has ten detectives. They receive approximately 80,000 cases a year.  (Photo by Michelle Ferng)

Over the past few days the IBJ team in Brazil has been conducting interviews with a number of judges, policemen and teachers. Each had a different area of expertise. Yet, when asked what would make their jobs a lot easier, all responded with the same answer, “better education” for their colleagues and the general public.

2008 JusticeMaker Dr. Aziz Saliba is creating two educational videos for Brazilians on the rights to habeas corpus and the Inter-American Court. We discussed Dr. Saliba’s project with Judge Dalton Soares of Divinopolis who told us “I don’t believe I’ve ever seen a program like this in Brazil.” He agreed “Society must confront crime by not only focusing on repression, crime should also be faced with education.”

Dalton also commented on the practicality of programs like Dr. Aziz’s project. He instructed us, “When it comes to this country you must keep in mind the continental proportions of Brazil. The mere quantity of prisoners and cases to be solved.”

A new report in Veja this week noted that Brazil’s Supreme Federal Tribunal handles so many cases that in 2007 it was allowed just 15 minutes to judge a case. In 2009 the Tribunal is now allowed 27 minutes.

The Civil Police also must deal with more cases than their staff can handle. Carlos Roberto dos Santos, Sub Inspector of the Civil Police in Divinopolis, told us that he has a team of ten detectives investigating on average 80,000 criminal cases a year. When asked what would help them with their overwhelming workload he responded, “Education, more education for the people and the families.”

Ms. Jomara Ribeiro de Carvalho, a professor of International Law at Faculdade Pitágoras, envisioned for the IBJ team how educational programs on legal and human rights in Brazil might work. She agreed that education is important, however, “in Brazil’s case, education is most effective when it starts with children and youth.” She believes that an educational program related to legal advocacy would best be “channeled through television or religious institutions” as she noted that church groups and international media are already so active in family and individual education across Brazil.

Ms. Carvalho gave the IBJ team some closing words of advice, “Teaching human rights or legal rights in Brazil can be difficult” because “the first Brazilian commissions on human rights were always related to prisoners, criminals and those on the margins of society.”  On top of this ‘stigma,’ Ms. Carvalho noted that “most people when they see police in the street they ask themselves, ‘Am I safer with or without the Police here?’

She agreed that the troubled state-society relations and continued racial profiling can make people reluctant to learn about their legal rights. But she added,

“Yes, they might be reluctant to learn until they have a problem they can’t solve. Then everyone wants to learn.”